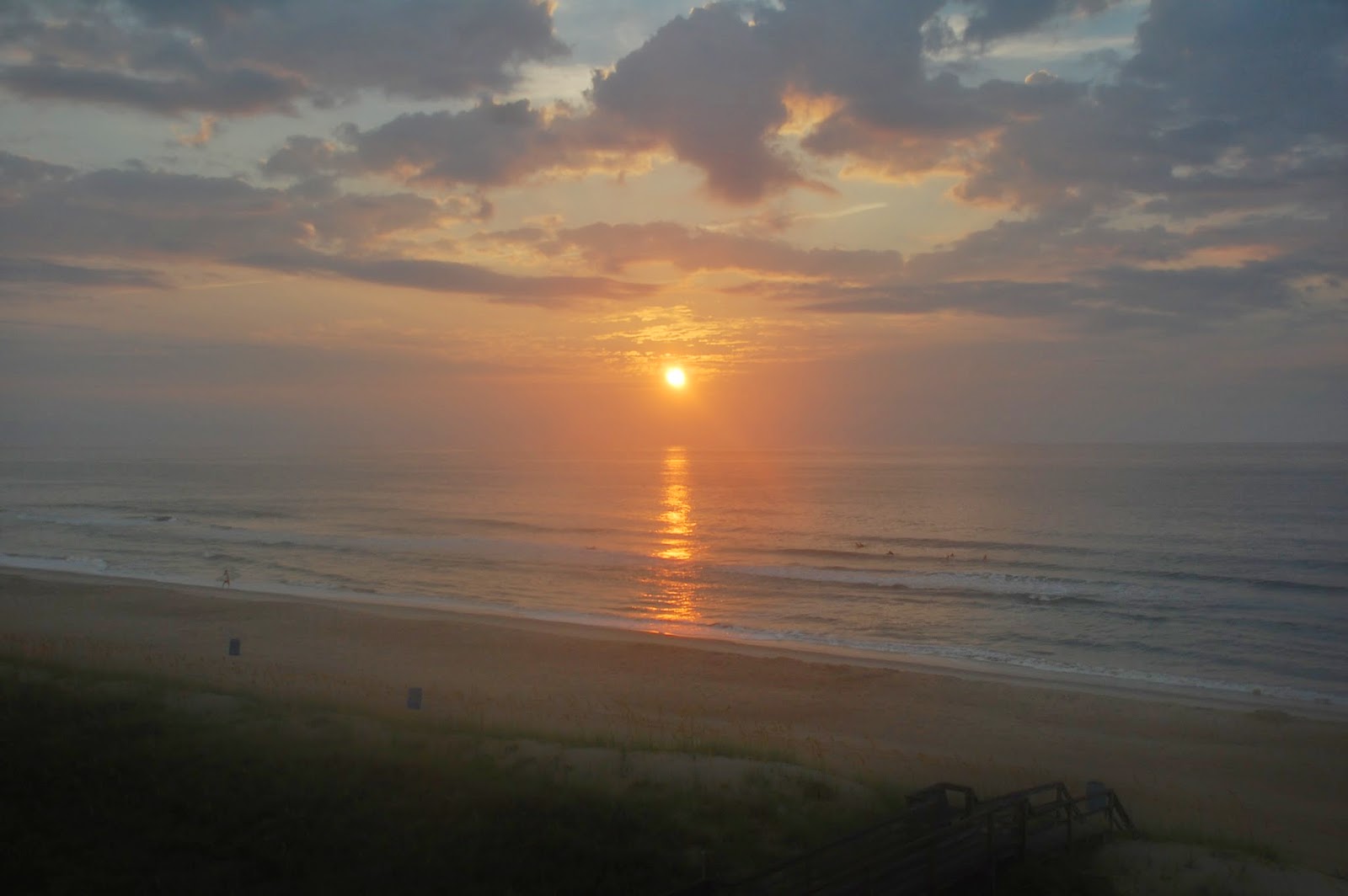 Both sets of parents were visiting our son's family in North Carolina - and we had an overlap of a week. It was then that all of us set off for Carolina Beach. It wasn't our first visit to that beach - our entire family had been there during an earlier visit - we had then checked in at the Courtyard Marriott right on the beach and had a swell time. This time it was going to be a different experience. What was special during this trip was that we were 'carrying our home' to the beach! We were planning to cook simple, homely Indian meals at our 'cottage' - among three couples and two half-tickets, it promised a lot of fun-filled moments!

Our son and daughter-in-law had booked a sprawling 3 bedroom house for the jing-bang of six adults and two kids. It was a full-fledged house with all amenities. The plan was to cook at home during our stay. So we packed Indian groceries from home along with some typical utensils for our Indian cooking - pressure cooker and rice cooker. The rest of the pots and pans and cutlery would be available at the house. The kids had packed their load of beach stuff including their brand new surf boards. We had planned to pick up regular groceries on approaching Carolina Beach.

Every place in the US - big or small has some of the chain stores for groceries as well as for home-stuff. So we procured the stuff we'd need for our 2 1/2 days' stay - bread, eggs & accessories, milk, tea, coffee, sugar, drinks, yogurt, oil,veggies - fresh as well as frozen, fruits and ready-to-eat snacks like cookies and dry fruits. Each one of us went about picking what might be needed, so we ended up with a big booty! Of course we had also packed all the yummy Indian snacks that had landed with us from India. 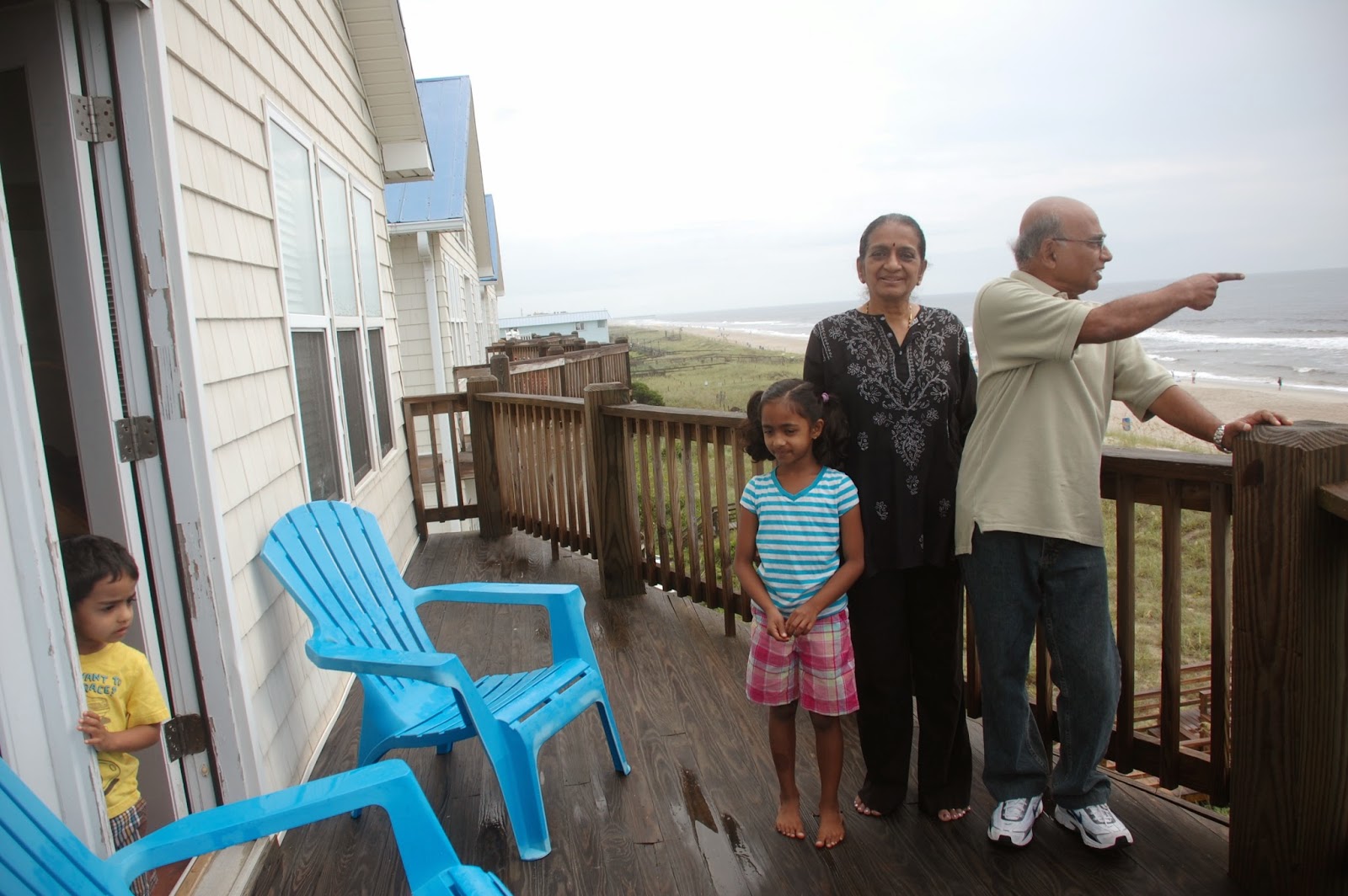 We reached the house which was bang on the beach - this was one of the three similar houses. And it was at a stone's throw from Courtyard Marriott! This house was a two-storeyed sprawling house given on rent to tourists. Basically two different sets of tenants could rent one house. One set would be given the entire ground floor and half portion of the first floor. The second set would be alloted the second half of the first floor and the entire second floor: basically 1 1/2 floors for each set of tenants. We were the second set - occupying the second floor with a big kitchen and dining hall, a very spacious living room cum family room with a terrace overlooking the sea, and one bedroom. There were a flight of steps internally leading to the first floor where we had two bedrooms with attached bathrooms; one of the bedrooms had a terrace facing the beach. And there was a laundry room too with washer & dryer. The building had an elevator but it looked very crude. And to top it, at the very outset, it didn't oblige us. Climbing two flights of stairs was not a big problem for most of us. Only my daughter-in-law's mother had a knee problem, so she chose to wait for the lift to be set right. And it was - before we had even finished unloading the stuff from the car. The bedroom on the second floor was offered to our senior counterparts, so they wouldn't have to take the stairs down to their bedroom. 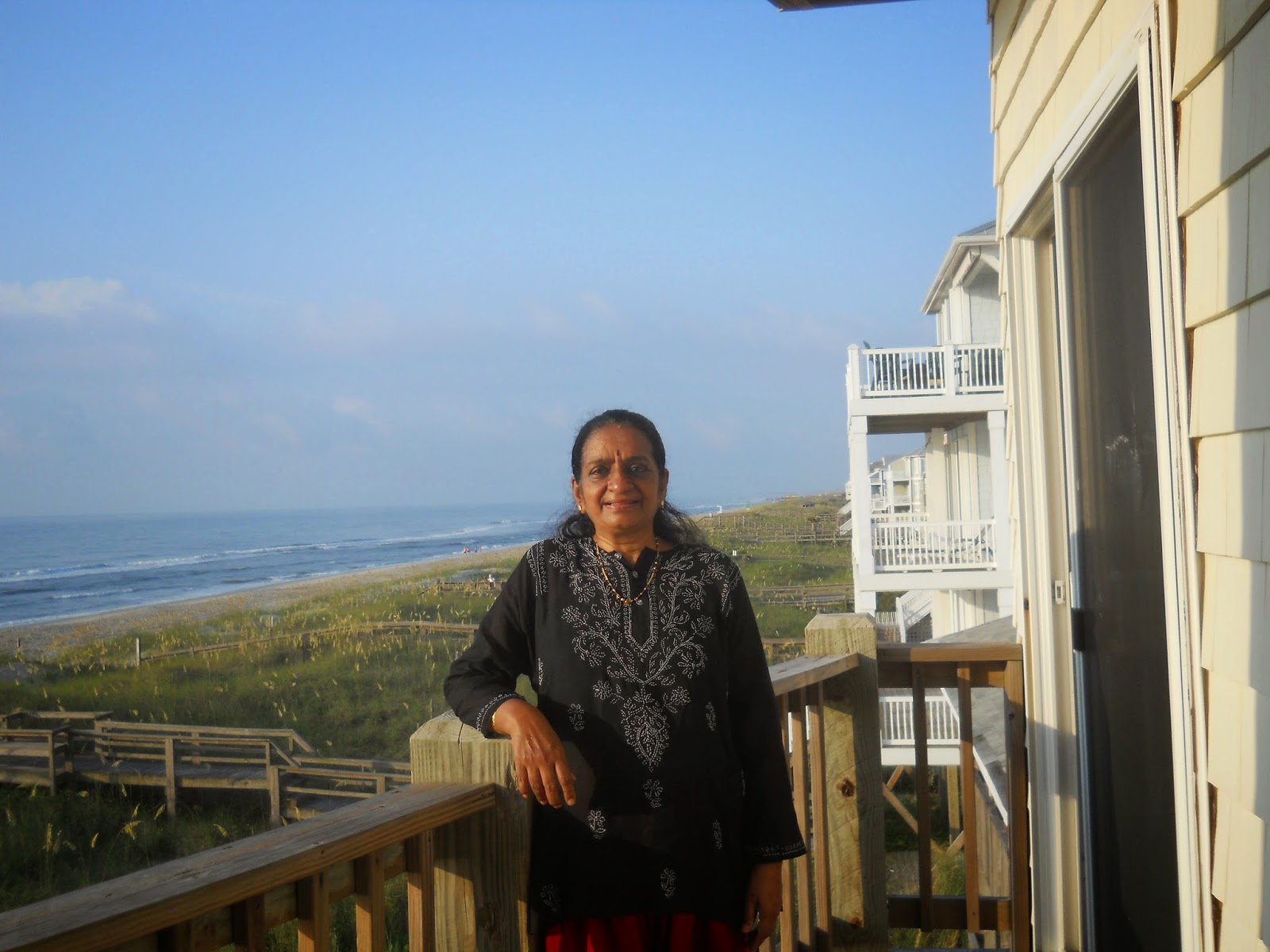 Our bedroom was the one with a small terrace, with the view - of the sea shore. 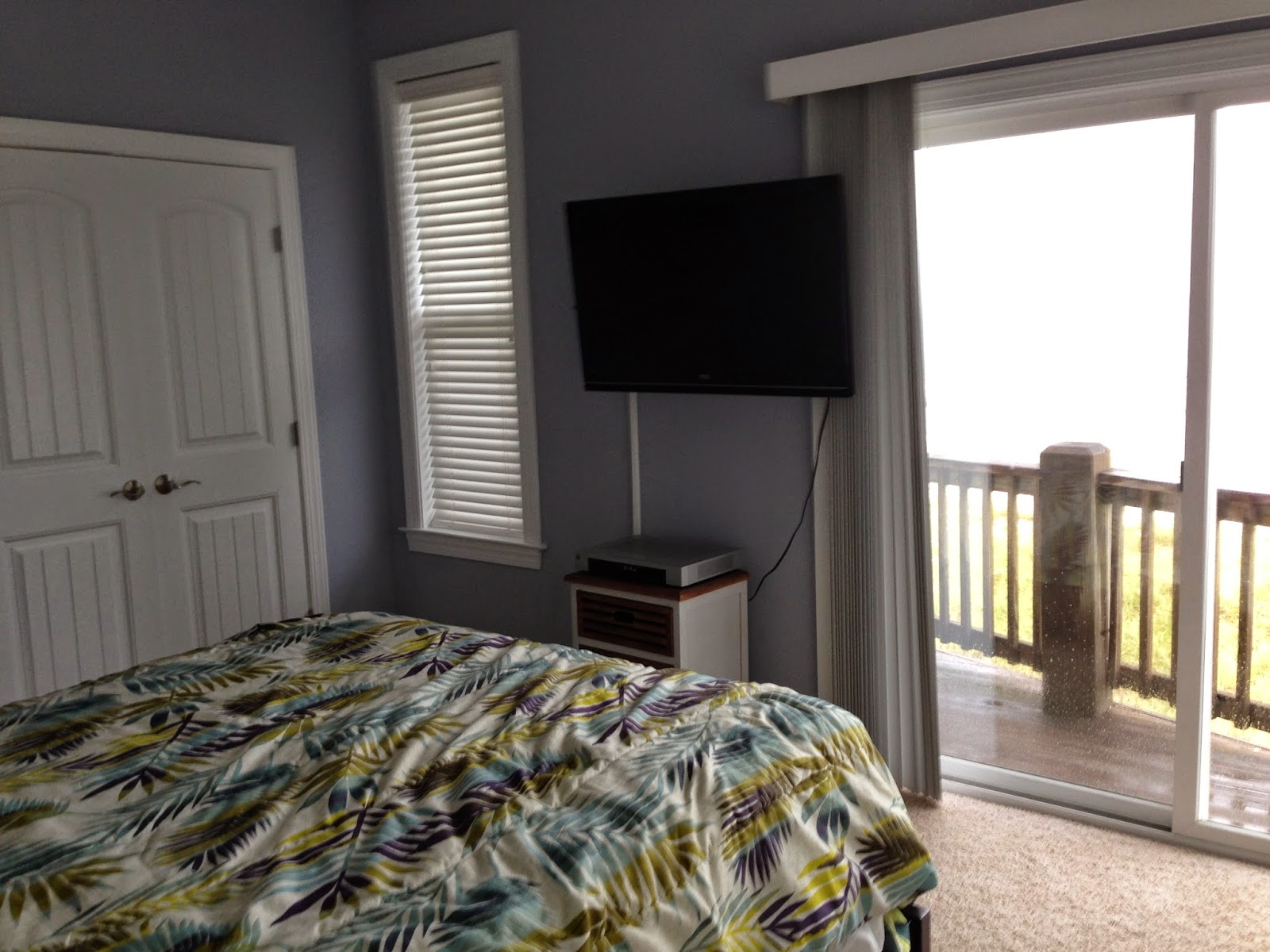 Relaxing on our bed, we could flit our eyes between the dancing waves through the french windows and the shows on TV. Cool, ain't it? And with two munchkins joining us, the fun became multifold - we could grab such moments only when the rain gods chose to drive the beach-bums indoors!
The kiddos were impatient to be in the waters - who could resist the beckoning waves and spend more minutes indoors? We quickly stuffed them and ourselves with sandwiches and willingly allowed ourselves to be dragged to the seashore. We didn't mind the 5 o'clock sun as we could cool our limbs in the lashing waves. But my daughter-in-law thoughtfully booked a set of beach chairs and a parasol for the next day. The beach was crowded but not overcrowded. My grand daughter enjoyed showing off her 'surfing skills' as she managed to balance herself on the waves. 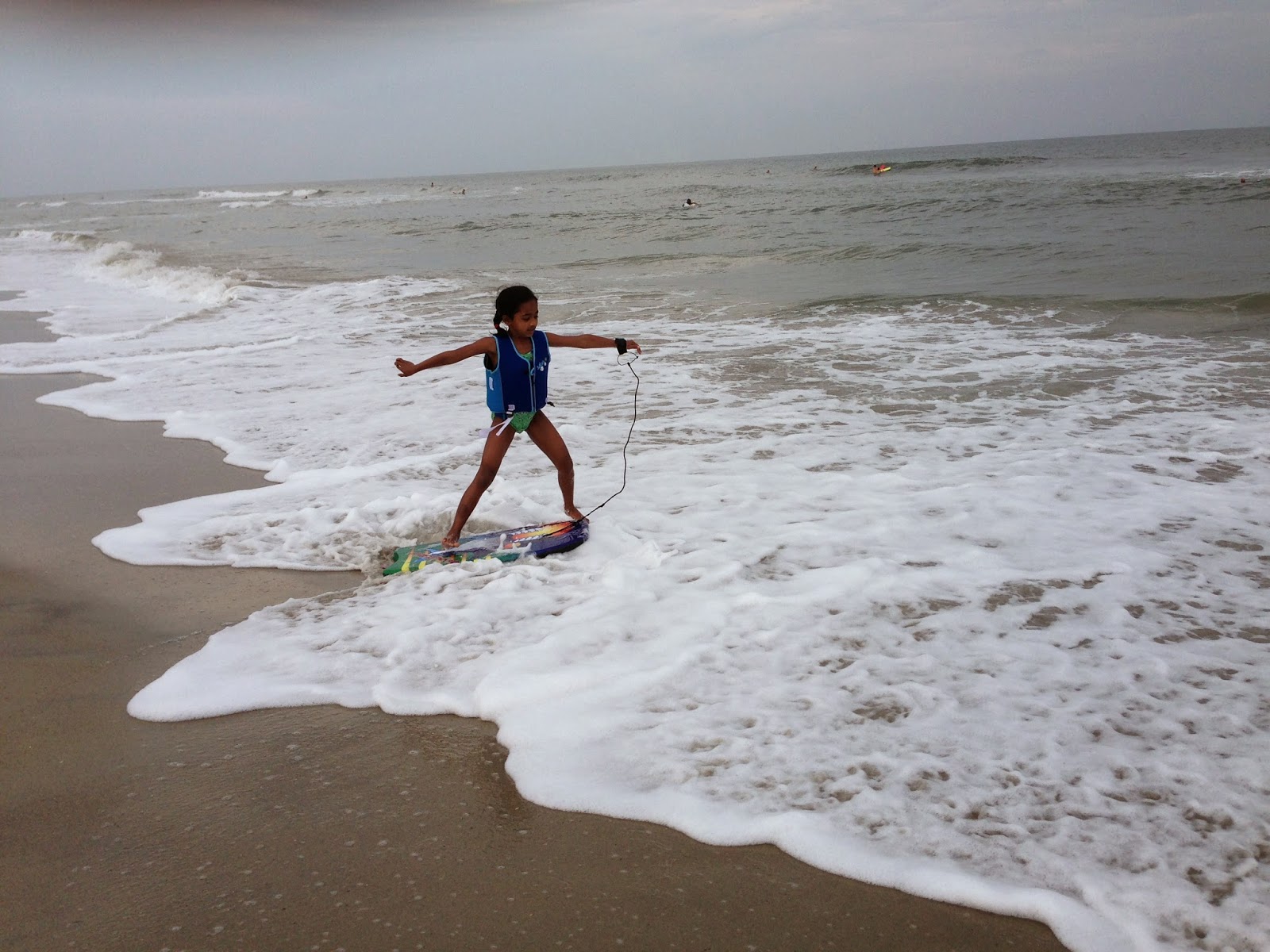 Her younger brother held on to his surf board and wouldn't allow it to get wet! Nor did he like the idea of getting himself wet! 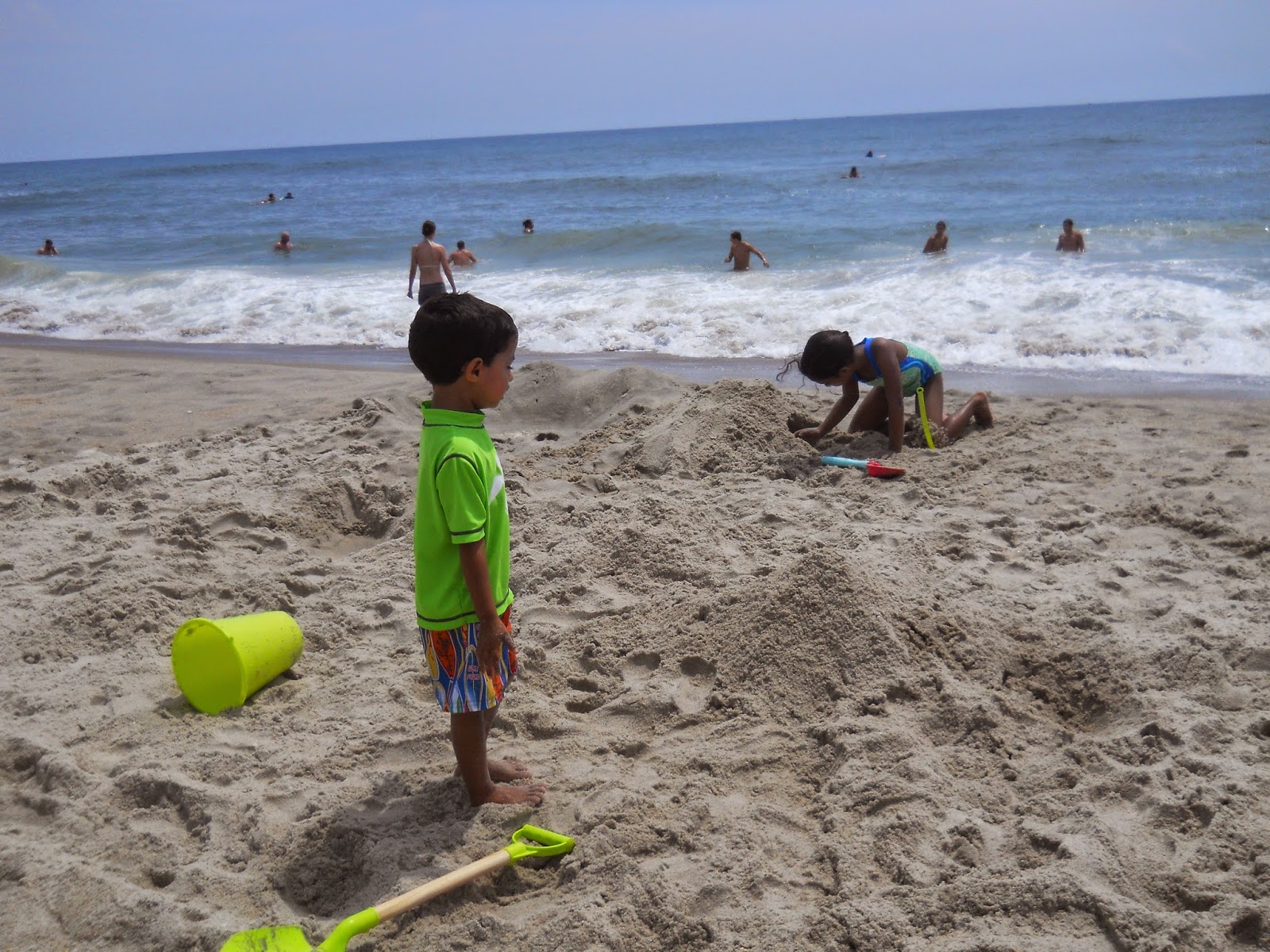 He then settled himself on the beach and enjoyed using his beach toys to make tunnels and castles, even as big sister intermittently joined him for supervision or suggestions.
He did change his mind and eventually befriended the constantly beckoning waves! After letting the waves kiss our feet till they started getting wrinkled, we ladies quietly sneaked away to cook dinner before the rest of the gang realized they were hungry. 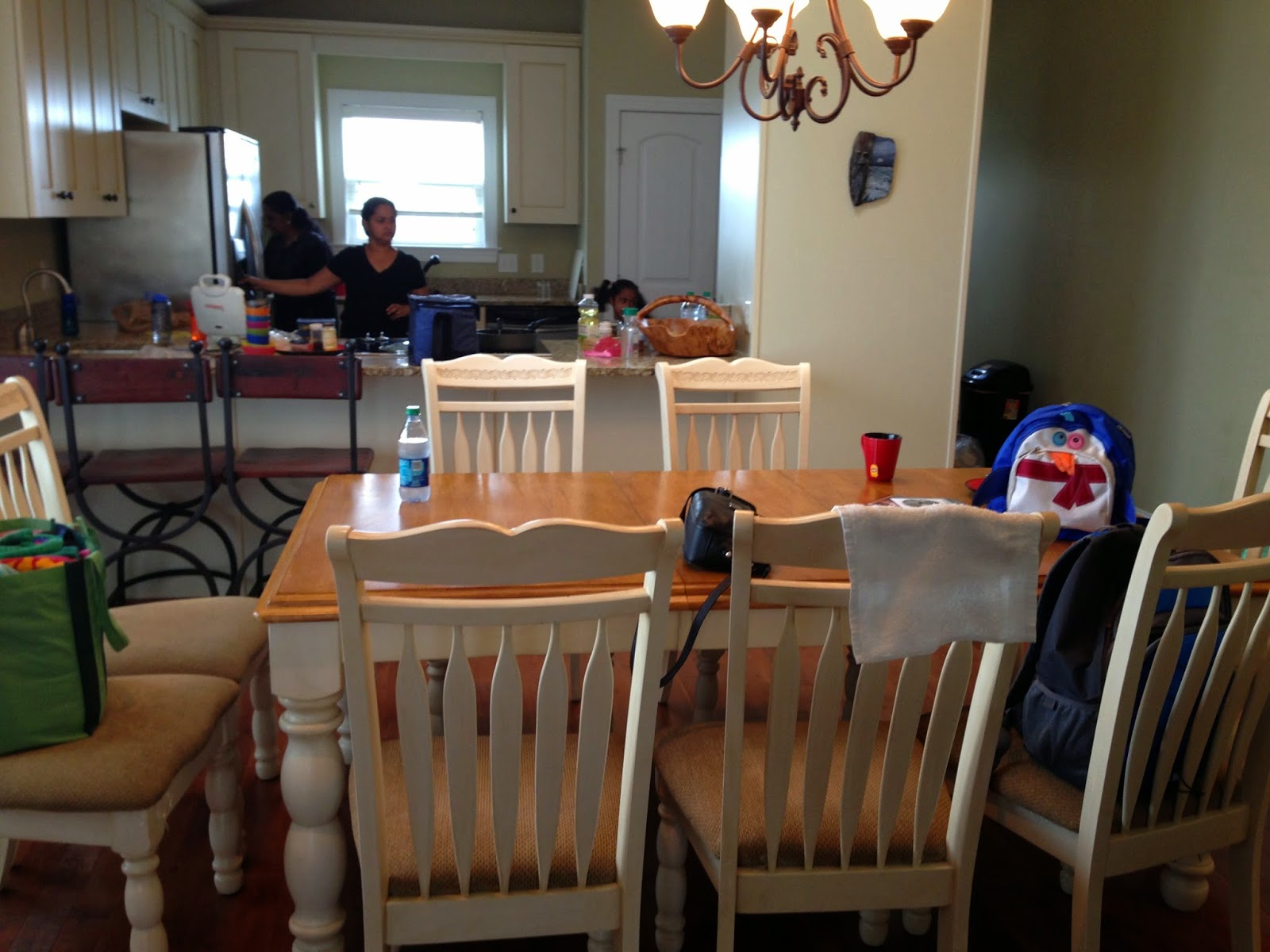 My daughter-in-law realized she had forgotten to pack the inner vessel of the rice cooker. No big deal - only the rice had to be made in one of the big pots. The three of us took charge of one item each - and in less than 45 minutes, piping hot dinner of rice, 'paruppu' (for the kids), thick tomato rasam, and mixed vegetable fry was ready, and laid out on the large dining table for 8 along with accompaniments like yogurt, pickles, Lays chips .... - a full-fledged South Indian meal. The brat pack was back after a mini shower right outside the house, so that minimum sand sneaked into the house. After another quick shower, and changing into comfy clothes, everybody plonked themselves on their chairs for the family dinner. It was indeed a quick dinner - everything was lapped up without a word of protest (from the kiddos I mean).
Post-dinner, all of us chilled out in front of the big TV and enjoyed some cartoons with the kids. Meanwhile my daughter-in-law collected all the wet clothes for a quick wash in the washing machine, so they'd be ready for the next day at the beach. Soon all of us were ready to hit the bed, so we said our good-nights and went to our bedrooms. Both of us stood gazing for some time at the incessantly lashing waves and the star-studded skies. We observed the night patrol driving along the beach to turn away the few odd ones still lingering on the beach.

Both of us have always been early birds. We were ready for our morning walk as usual before 6. Only this time it was a nice walk along the beach. It was fun to watch the quickly changing hues of the sky from grey to pink, to orange and bright yellow as the sun started rising. There were just an odd couple here and there. And yes, birds were there - sometimes even running ahead of us as quick as their twig-like thin legs could carry them! Romance was in the air as we walked hand in hand, letting the waves wash our legs and drag our feet into the sand as the waves receded - the ticklish-
dizzy feeling in the feet is a unique experience. In between, I also indulged in my favorite pastime of collecting seashells on the deserted shore.

When we returned after an hour-long walk, the house was just stirring. Others were envious of our pristine walk and resolved to accompany us the next morning. For breakfast, we used the dosa batter we had carried from home along with 'molagappodi' (spiced chutney powder). Some had dosas, others had for toast and eggs. After a sumptuous breakfast, washed down with a cuppa, all of us got ready for the beach.
Our chairs and umbrella were waiting for us on the beach right in front of our house. All of us cavorted on the beach as the sun was low and made the most of the forenoon hours. When we elders never got tired of the waves and sand, what to say about the kids? 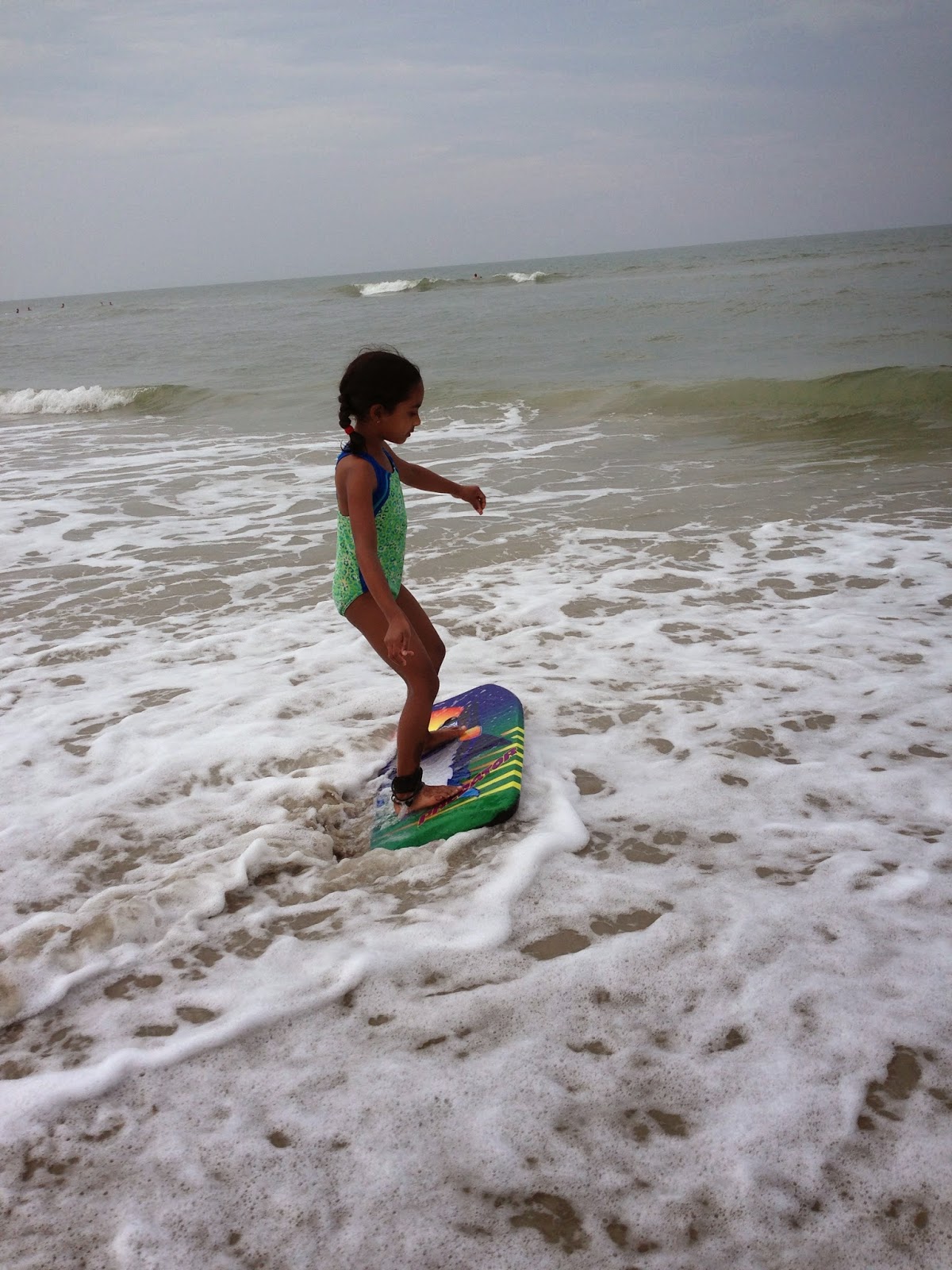 No need to say they had a blast riding the waves with daddy or building sand castles with mamma as the grandparents watched them indulgently. We had packed some snacks in our backpacks to munch in between. Around mid-morning, the ladies again vanished to take up their kitchen duties after a quick shower. We opened cans of chickpeas and made a potload of chana masala using minimum onions so that we wouldn't stink up the place. A large pot of steaming hot vegetable pulao and chana along with chips and salad and yogurt and pickle sat invitingly on the dining table and the hungry stomachs relished everything. The dishwasher took care of the dirty dishes.

We chilled for an hour. We had planned another round of the beach at 4 but as luck would have it, the rain gods chose to play spoilsport!
Suddenly the sky turned black with flashes of lightning to the accompaniment of thunder. The black clouds made night of day even as the winds started raging. As we remembered the hired chairs on the beach, we went to the terrace and noticed that all of them were being collected in the vehicle of the company - quick, efficient work! Also the coast guards made several rounds to make sure no daredevils still lingered on the beach.

The sky cleared as quickly as it had darkened and turned benign towards the beach-bums in an hour! Once again the beach started buzzing with people. We could spend a couple of hours there. I joined my grand daughter in collecting shells in ziplocs - I was interested in the halves dreading the ones from which some little creature would wiggle out, but she wanted those which housed some little creature! I knew that only some ziplocs would make it to home - the others would 'get lost' during our return trip - no thanks to my son! For dinner the kids had a great treat - pasta was made specially for them. For the adults, we opened packets of uncooked chapathis (from the Indian store) and heated them. So it was chapathi - chana - shrikhand, yogurt and pickle.... yummy!  We lounged in the living room for a good chit-chat and also spent some time listening to the sea for half an hour before retiring for the night. 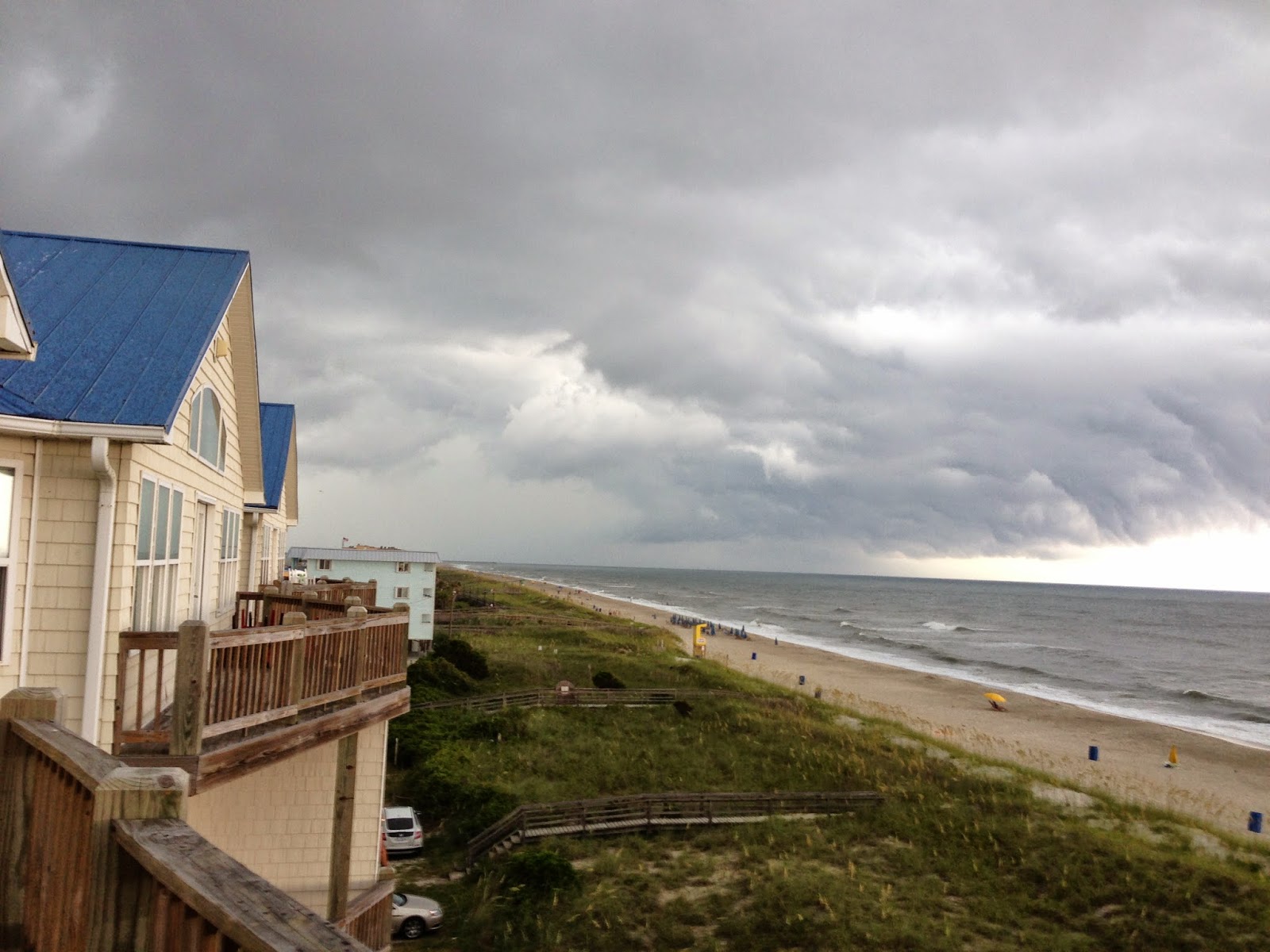 The next morning too we had a nice long beach-walk. Then after a short beach-time with the kids, it was pack-up time. The clothes went in for a quick wash. We made vegetable upma (minus onion) for breakfast and also finished the dosa batter. We used the leftover slices of bread to make sandwiches for the drive back. You wouldn't believe it but all the groceries and foodstuff we had brought with us had been  well utilized - we ended up dumping very little. We ran the dishwasher once we were done with our breakfast. My son and daughter-in-law did a quick sweep to clear the place of sand. You see the culture there is to make sure the the place is clean when you leave - almost as clean as you found it when you arrived.

As we started back on our drive, we bid goodbye to the waves and sands with a heavy heart even as we wished we could take them home with us .

Posted by brinda.balasubramonian-brins.blogspot.com at 4:22 AM No comments: