Many of our friends visit their native places and their ancestral homes there. I've always envied them for their opportunities to relive the wonderful days of yore and share memories with the next generation. Actually I do have a native place (Manjappara) but there is nothing native about it because I must have been to the place one odd time as a toddler. My grand parents had their houses not in our native place but in Ernakulam. My maternal grand father as the Chief Engineer of Cochin Port Trust, lived in the sprawling government quarters in Willingdon Island as long as he was in service. So childhood trips to native place meant visits to Ernakulam and Cochin as we shuttled between one set of grand parents to another. By the time I was twenty, 'our native place' had 'moved over' to Chennai! And with no home to boast of in Kerala, our visits to the place had come to a full stop.

Last year my uncle conveyed a great news to me. My maternal grand father's government quarters in Cochin Port Trust - the house where I was born (as also my siblings and cousins) - had been converted into a museum - Maritime Heritage Museum, the pride of Cochin District where a good collection of unique and rare navigational equipments and photographs connected with the saga of construction of Cochin Port are on display. (This is not to be confused with Maritime Museum). A proud moment which revived nostalgic memories .... and sowed the seeds of a secret desire to visit the place some time. I felt as if I had been elevated to a status comparable to Rajeev Gandhi's - yes, if he had a Teen Murthy Bhavan, Brinda has a Maritime Heritage Museum - ha ha!

I grabbed at the opportunity when we made a nice, long, relaxed trip to Kerala this year. We made this trip to Cochin exclusively to pay a visit to the Museum and also visit the road named after my grand father Mr. C.V.Venkateswaran.

We hired a prepaid auto to Cochin Port Trust from Ernakulam Junction. As we were riding along the backwaters, I remembered the numerous times I had taken the ferry as a little girl with my aunt or driving with grandpa while commuting between both the sets of grand parents.

I had been looking for signs for the museum and also dropping the name several times but our apparently all-knowing auto driver stopped in front of a building which by no stretch of imagination could be linked to the house etched in my mind. It turned out to be one of the Taj Hotels! We corrected the auto driver and now he went on asking for directions for Maritime Heritage Museum at every nook. We were guided and misguided by some of the Army fellows around. A couple of driving around in circles and diminishing hopes later we reached the place. And wasn't I pleasantly surprised to note that not much had changed in these 56 years - in the sense I could identify and remember the place which I had last visited in 1959! 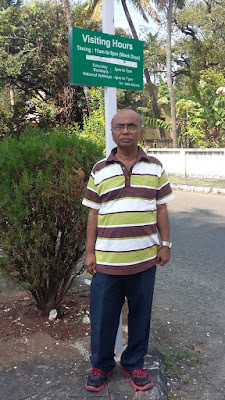 I stood enthralled at the gate admiring the building's fresh coat of paint and the newly tiled pathway. Otherwise the house looked the same but our fabulous garden had vanished with the years.

The old garage has been converted into the office at the entrance where you buy a modest ticket of Rs. 10/- per visitor to this Museum and also buy a souvenir if you choose to. There were very few visitors. We bought our tickets and then we told the person at the counter about my connection with the building, about my late grandfather .... about my uncle's visit last year. And the guy stood up and enthusiastically accompanied us to show us around the museum. I was like an excited little girl pointing to various spots and telling my husband about the house, the rooms, the changes .... 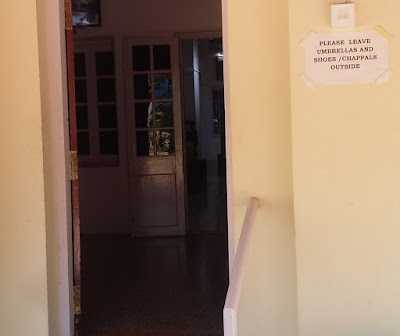 The very first feel was that of entering a temple - you see the sign board that tells us to leave our footwear outside. What is most attractive and unique about the building is the flight of stairs outside leading to a fascinating sit-out. We entered the long verandah running from one end of the house to the other - the most obvious change is that it has now been enclosed. Also there is an extra tiled roof at the entrance.

The space in the above picture used to be our hot photo-spot.

All my baby pics were taken on the verandah or in the front yard / entrance.

Even my paternal folks found the spot ideal for pictures during their visits. 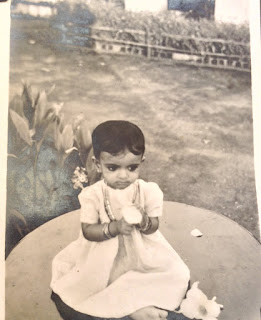 At times a bunch of golden yellow 'kolaambi' flowers would do the trick of keeping me in good cheer for the photo sessions. 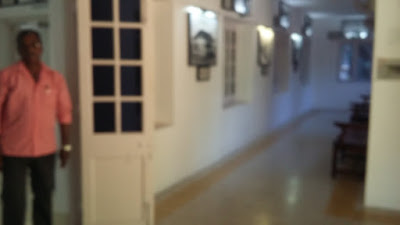 The entrance to the drawing room is almost at the center of the verandah - as it was earlier. Then we had a couple of bedrooms towards the right and left.

I was more interested in pointing to my grandpa in the photos adorning the hall. I couldn't help remembering the house during my childhood - its wooden floors, the inviting sofas, the antique curios that had added to the grandeur of the palatial house ..... There were bedrooms to the left of the drawing room too (which are now shut out). But somehow I don't remember much about them except that one of them had huge framed pictures of Gods and Goddesses - must be Raja Ravi Varma's. All I remember now is that I used to feel they were very pretty.

The rooms on the right have exhibits currently. The bedroom at the right end was the room where I was born. I have heard stories from my mom and grandma about my birth in the corner bedroom. The lady doctor would be called home and deliveries those days would be at home. Interesting, heh? I have spent months in this house during weddings of aunts and whenever a sibling was born - well, I have just two. Incidentally, each of those times my aunt too had her kids. So it was a set of two boys in 1955 and then a set of two girls in 1959.

Next I entered the small room behind the drawing room. I pushed the half-closed window and looked to the right - and sure enough I got a view of the kitchen used to be located at the back of the house.


Adjacent to it was the dining room minus the dining table as all of us would sit on the mats on the floor for family meals.

Beyond that I could get a glimpse of the servant quarters where our Man Friday Padmanabhan was put up. I remember a tree at the back which yielded the sweet-sour 'poochapazham'. There was no way of exploring those areas as they had been shut down.

What I sorely missed was the 'hand-washing-station' ('kottathalam' as it would be called) as you come out of the dining room. I could not view the spot in spite of craning my neck in different angles. I'll tell you why that spot was close to me - it was there that I had had my first and only accident! I would be a kitten on the prowl during afternoons as the whole house would be napping. I wasn't naughty - just indulged in harmless little pleasures. One afternoon I was leaning over the parapet of the 'hand-wash area' and putting my hand under the tap to enjoy the flowing water. It seemed so soothing .... till 'dhum' - I fell inside the cement tub. My screams and yells brought the whole house scurrying. I had broken my chin and the place was flooding with my blood. Grandma had the common sense to call grandpa from office and he was home in his Hilman car within minutes. I was rushed to hospital, got three stitches and was a pampered three-and-a-half year old for a month.
I also associate the house with a 'poonal' ( thread ceremony) and two weddings. With such a palatial house, there was no need to hire a wedding hall.
I was just two when my aunt got married and the above photo is the only memory I have. But I vividly remember my youngest aunt's wedding. The decorative 'pandal' was put up in the sprawling front portion of the house and could house the entire guest list and more and I remember having a gala time with my brother and cousins ....

I have to tell you about another interesting spot unique to this house. It's the smaller corridor at the back. This spot was used whenever grandpa called the goldsmith home to make ornaments for weddings or otherwise. I'd interestingly watch the fellow using his bellows for the fire to melt the gold and hammer it to make ornaments. 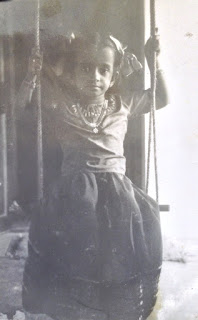 I also had a swing there. But as the area used to be dark, photos wouldn't come out bright.

Now this place though neatly kept, has been shut off - I could get a glimpse of it from one of the windows.


As I came out after a nostalgic round of the house, I couldn't help walking to the farthest end of the front yard to take a good look at the majestic house. I couldn't help remembering the mango, guava trees and pomegranate trees and vivid varieties of rose, canna and jasmine, kolaambi, chethi and arali flowers all along the fence around the front yard and the modest kitchen garden at the back nurtured by the ladies at home, specially my grandma. There was no leftovers of the garden of yore.


Here I learned to identify flowers and fruits, colors and numbers, to share and care and adjust with others, enjoyed stories, cuddles and kisses and loving care of near and dear ones whose finger I'd clutch on to while taking a round in the garden. We'd also interact with the numerous servants who always kept a watchful eye as they were like family. I'd also gang up with my brother and cousin to play some innocent pranks in some corner of the sprawling house away from the prying eyes of the elders. We'd also climb up the trees, pluck guavas and mangoes and share the booty. I'm sure everyone who reminisces about childhood days has similar experiences in the kitty. What is unique for me is that the house associated with my childhood has been elevated to a museum. I also feel privileged because I am the only grand kid who remembers the association. All the others were too young to have such a treasure-house of memories. 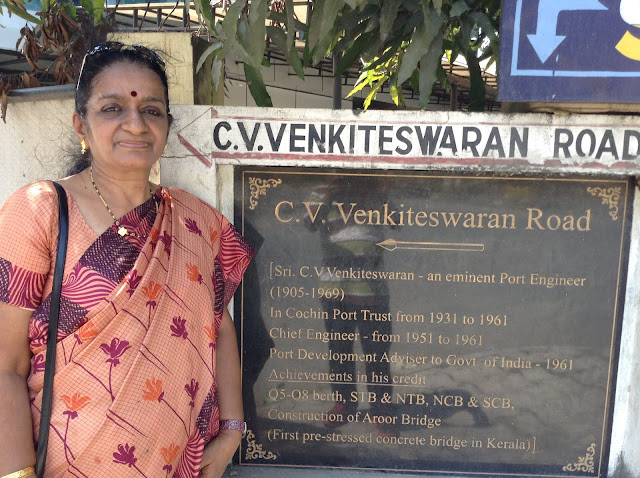 There was one more place to visit - the road named after my grand father which is pretty close to this museum. As I read the plaque, I could get a better idea about his laudable contribution as a Civil Engineer. 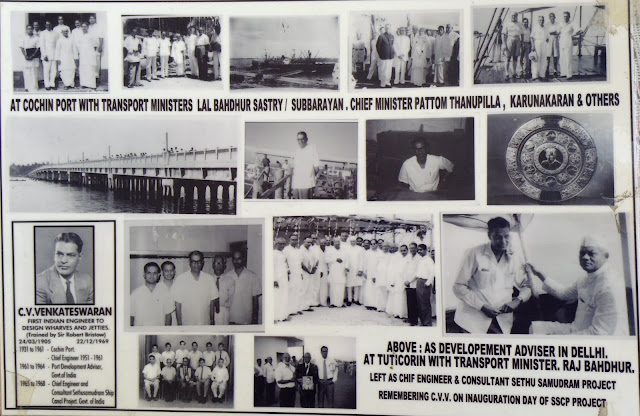 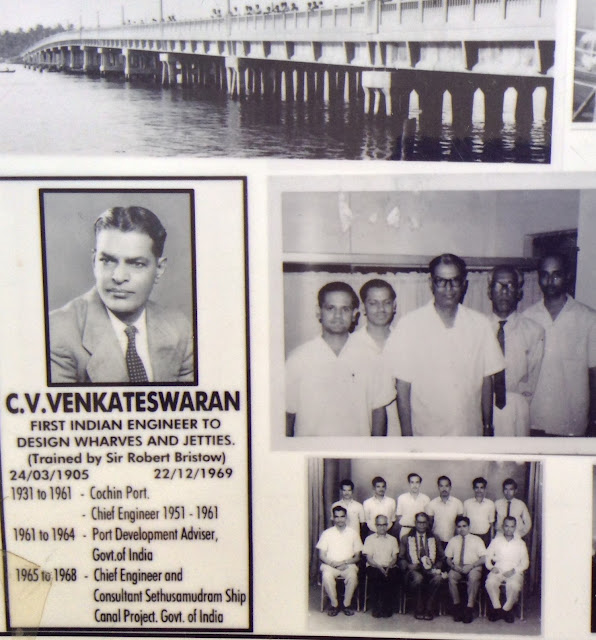 In fact he is credited with the title of 'the first Indian engineer to design wharves and jetties' and the Aroor bridge. 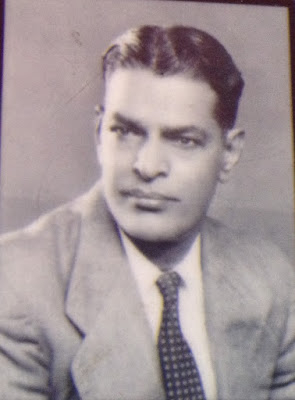 I admire him for his achievements in his profession but I will always remember him as my tall, dark, handsome, prim-n-proper, principled and affectionate grand father.
Posted by brinda.balasubramonian-brins.blogspot.com at 9:59 PM 3 comments: