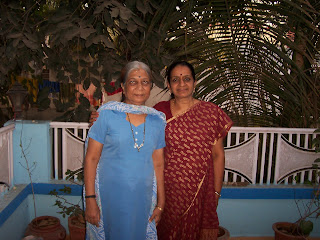 My intimate friend Kavita Tahiliani breathed her last a week ago leaving a vacuum in a corner of my heart – she was one of a kind – a rare example of a true friend. Her last 25 days were in the ICU, most of the time on ventilator – otherwise she would have fought tooth and nail to get back home!


Her traits – simplicity, straightforwardness, down-to-earth practical nature, hospitality, generosity, loyalty, punctuality… Add to it a dash of gullibility, eccentricity and innocence and you can conjure up her persona. 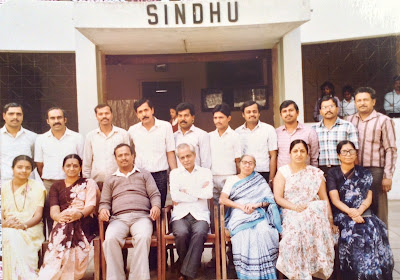 We met as colleagues – she was a very senior teacher when I joined though she was only two years older than me – she had joined while doing graduation and I waited to finish my doctorate before joining.

Both of us were language teachers – she teaching Sindhi and myself English. And we had our similarities and differences. She was more logical and I emotional. Both of us shared a love for performing arts and a flair for writing.  We complemented and supplemented each other very well in our joint activities at work. 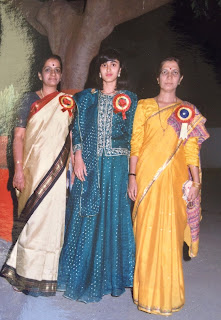 I have referred to her in an earlier post – she was the organizer and I the arranger of cultural programs in school and college.

She was not a great singer but she was game for anything and would joyfully join us in our group songs on special occasions. 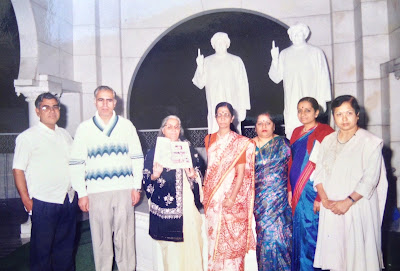 Both of us were in charge of the annual school magazine, 'Phoolistan' released every 26th Jan. We were close associates at work sharing an excellent rapport; we stayed in the same locality, so anyone bumping into one of us would surely inquire about the other.


And we did car pool. She started accompanying me when I started off as a novice driver – she didn’t know the ABC of driving but she was a great morale-booster with a kind of ‘main hoon na’ attitude! I really admired her courage ‘in putting herself at risk’ and even told her that I would have hesitated if I were in her place. She just pooh-poohed the whole thing saying, “An accident will happen if it has to happen – even when we are walking on the road”. She would park herself next to my car 10 minutes before schedule and I’d have my husband chasing and hurrying me through the early morning chores on catching a glimpse of her through the window. And I’d be like – ‘grr… did she have to be so early?’ You see I am a stickler for punctuality but she was ‘extra-punctual’! So whether it was question papers or assessed papers, you know who would lead the band of teachers in the submission. But there never was any compromise in the quality of work which was accomplished with complete sincerity in spite of her several health problems.

Kavita was a very loyal and trustworthy friend keeping away from rumors and gossips. But she had an unenviable memory – forget about her friends’ birthdays and wedding anniversaries, she couldn’t remember her own! So we took extra effort to remind her of hers!
She was the epitome of hospitality – so much so that there were times when I’d dread to go to her place as she’d almost kill with her kindness. She’d bring out one snack after another if I said ‘no’ to any of her offers. And how many times can one refuse? I soon learnt that the best way to escape was to submit to her at the outset and nibble a bit from the spread laid out.

It was Kavita’s idiosyncrasies that made her so lovable! Diabetes was her bosom pal even before I had come in the picture. She struggled with courage to keep it under her thumb but many a time the latter enslaved her. Her suffering and helplessness made her gullible – she’d try any new unproved and unapproved introductions in the market making tall claims of diabetes-control – it took her almost a year to realize the worthlessness of a special diet couriered in a special kit for a whopping price from the southernmost tip of the country. She’d try out novel recommendations but she didn’t have enough trust in doctors and hospitals – she felt she knew her body more than them! She held on to this view and even managed to get herself discharged from hospital several times! Her universal prescription for any pain for anyone was ‘Combiflam’ – she would gulp them down like toffees in spite of our well-meaning advice against it – she’d unabashedly prescribe it for us too! She could be as stubborn as a mule and we could do nothing about it. She was an astrology-freak and she knew I wasn’t into it, so we never discussed it. She had a disarming innocence.

The last time we met – in December end, we were discussing about a function for which both of us had expected an invite but hadn’t received. The very next day she called to say she had got the invite and offered to take me too. It took her some time to understand why I declined.
Though Kavita had taken voluntary retirement due to health problems, she continued to make contributions to keep alive the language she loved – Sindhi. Life was a roller-coaster ride for her but whenever we met, I’d be overwhelmed by her puffed up face and body and toothless smile but she’d be cheerful and never harp on her poor health. She always radiated positive vibrations. Last year when I was in the US, a friend had mailed me about her critical condition in hospital. She battled valiantly and romped home. I called her up and chatted up for half an hour – I could sense a child’s excitement on hearing my voice.
The last time I called her was to greet her for New Year. She was hospitalized on 3rd. I expected her to rally forth and return home as usual but sadly it was not to be though her beloved husband had provided all the love and care and medical treatment. To end on a positive note, her pain and suffering ended and she has attained heavenly abode. May her soul rest in eternal peace!

Posted by brinda.balasubramonian-brins.blogspot.com at 10:21 PM