Diwali is a festival celebrated in various pockets of India with slight variations but with equal gusto. It brings to my mind the joy of the rustle of new clothes, loads of scrumptious snacks and stacks of light-and-sound crackers, Lakshmi Puja – not necessarily in that order for everyone! The festive spirit and enthusiasm is the same but as everybody knows, so very different from olden days!

Half a century ago – no, make it 4 ½ decades – I don’t want to look ancient, you see – Diwali for me was all about the shimmering ‘pattu paavaadai - blouse’ (silk lehenga-choli) specially procured for me and my sister by my mother from Madras whichever part of India my father was posted. I couldn’t simply understand the logic of oil bath before getting into our silks but mother ruled! I also remember my brother arguing that we girls got new clothes worth Rs.150 (those were the days!) while his shorts and shirt cost only half that amount and that he be compensated with extra crackers. His plea would be turned down by my parents as illogical (each of us were entitled to Rs.100 worth of crackers those days) but we girls willingly handed over a portion of our share of crackers to our brother - partly because of pangs of guilt and partly because we were scared of the loud crackers.


All sweets and savories were home-made – mother would line up huge steel ‘dabbas’ full of ‘mixture’ and  ‘murukku varieties’ (‘thenguzhal’, ‘ribbon pakkodam’, ‘muthusaram’, etc). There would be three categories of sweets – a rich, special exclusive ‘badam halwa’ / ‘jangiri (imriti)’/ ‘boondi laddoo’ – for family and near relatives only. The second would be ‘gulab jamuns’/ ‘Mysore pak’ / baadusha /coconut barfi or its ilk – for family and distribution. The third was the simple (yet tasty mind you) ‘rava laadu’ – which we’d call a poor cousin of the others in spite of the embedded raisins and cashews and leave them aside exclusively for distribution. Mother would make packets for distribution among family and friends while the rest of the family would stare with dismay at the alarmingly rapid dip in the levels of the ‘dabbas’. Father would be vociferous in his objection – “You are distributing the entire stuff – you know I don’t eat any of the stuff from others’ places.” Dad was fastidious to the point of being prejudiced – he wouldn’t even taste any of the incoming stuff but just say he knew it wasn’t half as good as ours! We kids loved it if there was a box of sweets from a sweet mart amidst the sweets from friends because they were a rarity in our household!

When I set up my own home in Pune after my marriage, I realized another facet of Diwali I had hitherto been blind to – the cleaning operation – you see mom had not involved us in the job as she’d manage with the servants. Once I started working, it was a tightrope walk – especially during festivals. My vacation would invariably start just two days prior to Diwali, so I would have to streamline my schedule – cleaning would start a week before with the help of my maid and snacks would start off three days before the D day. I followed my mother to the T – similar sweets – oh yes, I can make jangiri and boondi laddoo too, not to mention all the others. My goodness! There would be so many friends among whom there would be exchange of sweets!  In fact there would be a sort of healthy competition amongst us in exhibiting our culinary skills through our original ‘special-invention’ snacks and also good natured exchange of recipes. Comments at home traced the same pattern as in my parents’ home. My family would say my items tasted the best – I guess the same dialogue would resound in every family! Some friends who would supplement the few home-made snacks with those from the bazaar would seem a little shame-faced and apologetic about it! Or was it just a figment of my imagination? I can’t say for sure!

Diwali meant silks for the ladies of even reasonably well-to-do South Indian families. My mother had started buying Kancheevaram sari for me for every Diwali since I entered my teens and so by the time I got married I had a stock of over half a dozen of them! This Diwali gift continued even after marriage. I’d look up colorful ads of Radha Silks, Nalli Silks and Kumaran Silks during Diwali season in Tamil magazines and choose the color or design for next year’s Diwali. I’d give my parents three choices in order of preference and they would get me one of them and see to it that it reached me well ahead of the next Diwali so that my blouse would be ready too – so you see being a Puneite, I always lagged a year behind a ‘Madrasite’ in terms of Diwali designs in silks! Not that it matters! As for clothes for the rest of my family, hubby couldn’t care less, so it was my insistence that would see him reluctantly don a new shirt. My sons were chips off the old block too – I would have to drag them to the readymade store. But they’d rather pick up a new pair of shoes – they were more into shoes than clothes! But when it came to crackers, they’d never cry ‘halt’ – we had to apply the brakes taking into account our budget. Thousand rupees – (even 600-700 for that matter) just going up in smoke in a matter of minutes was a bit hard to digest for us elders! 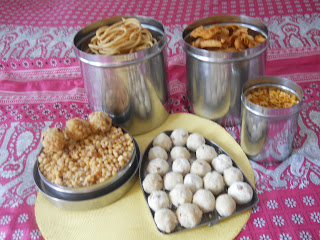 How times have changed! Very few prepare snacks at home now - I'm proud to say I am one. With most women working, ordering sweets has become the order of the day. Even home-makers feel there’s no point taking too much trouble preparing snacks and choose to place orders as everything is so readily available and money is not an issue. Naturally exchange of sweets has drastically reduced. In fact people prefer to exchange chocolates / dry fruits instead of bought sweets – what with dubious and adulterated sweets flooding the markets. So much for the thrill of Diwali sweets! Not to mention the calorie-conscious majority! Also, with more and more opting for designer wear / ready-mades from Malls / boutiques, there are lesser visits (chasing the elusive matching blouse) to the tailor who lords over his customers during this season. The buying power has shot sky high and there is one-up(wo)man ship in flashing branded clothes and accessories and exchanging rich gifts / giant boxes of dry fruits. However kids’ thrill in crackers remains unabated. And the varieties have become infinite and sophisticated!

True, India’s standard of living has vastly improved. Money is replacing personal involvement. The air at most homes is not permeated by the aroma of cardamom, saffron, ghee and hot oil - Diwali sweets arrive from reputed sweet shops. Shopping areas are choc-a-bloc with enthusiastic shoppers breathing down one another's necks; many have switched to online shopping. Greetings as well as compliments for one another’s Diwali clothes are exchanged in the lobbies / corridors of buildings as everyone goes out to visit family or on drives to their favorite spots. My evenings are best spent on the terrace watching the colorful electric lights blinking and beckoning from each flat and dazzling fireworks dotting the skies as every society bursts sophisticated fireworks!

Posted by brinda.balasubramonian-brins.blogspot.com at 6:47 AM