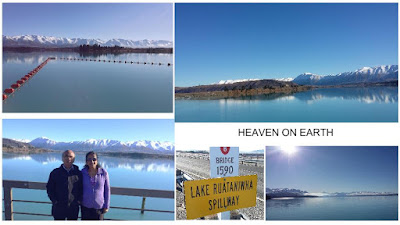 After breakfast, we started on our drive from Queenstown to Christchurch - 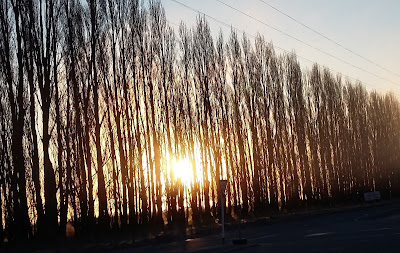 the sun was streaming through the bare trees.

We were promised lots and lots of scenic photo-stops on the way. 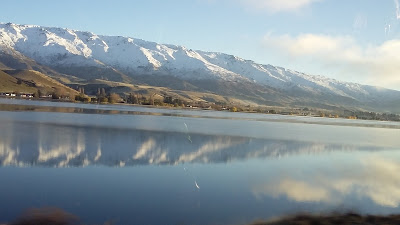 We kept staring out of our windows capturing some scenes on our camera and framing the rest in our mind's eye. 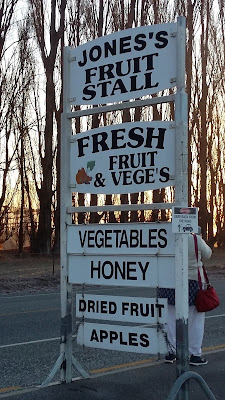 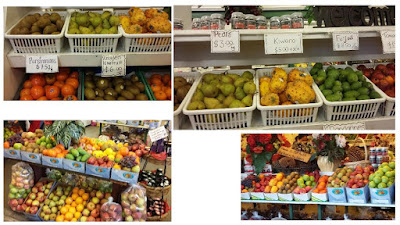 with a captivating array of exotic fruits as well as vegetables grown in New Zealand. We couldn't resist the temptation of buying the 'oh-so-fresh' fruits to take back to India. 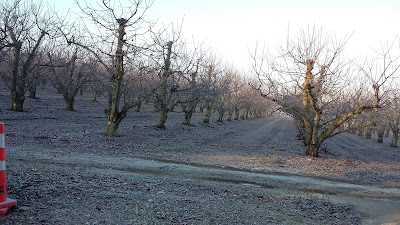 As we came out of the shop we didn't fail to notice dry bare trees in the orchard - we were told that those were cherry trees - the season was just over! 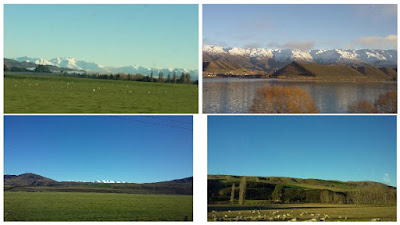 As we continued our drive we realized that such pristine natural beauty soothing to all our senses is rare to find.

Naturally we made stops on the way to loiter around - one was near Lake Ruataniwha ..... 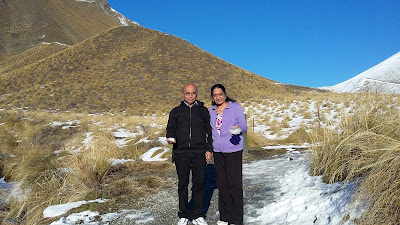 and at times stomping on the snow and crusts of ice. In fact one of the enthusiastic guys in our group ran towards the snowy mountain seeing trekkers there - just like a school kid - despite the repeated shouts from his wife and the rest of the group to come back. It was after a good ten minutes on the snow that he chose to return. His shoes and socks were soaking wet and his hands, face and ears were freezing. But he had his share of fun! 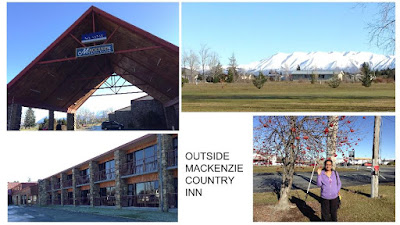 For lunch we stopped at Mackenzie Country Inn - in the midst of a sprawling countryside - a very different kind of place. We took a stroll around the place which had a nice garden and picturesque views.

We had been intimated by our tour manager that we were being served sambar and rice too along with their usual Continental fare but we ought not to expect authentic Indian taste. I was keeping my fingers crossed. Anyway there was no chance that we'd go hungry - at least there would be bread, butter, cheese. 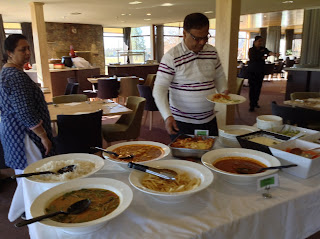 We started with creamy corn soup which was really tasty. With renewed hopes I went to the table to serve myself. There was rice, there was sambar and there were French fries! What more could I ask for? 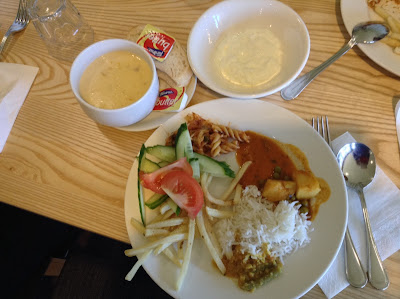 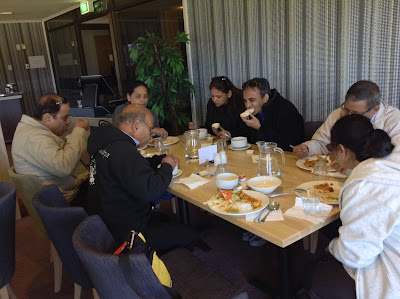 These dishes as well as aloo matar tasted good too. And there was pasta and yogurt also, not to forget bread and butter! For dessert we relished fruits with ice cream. 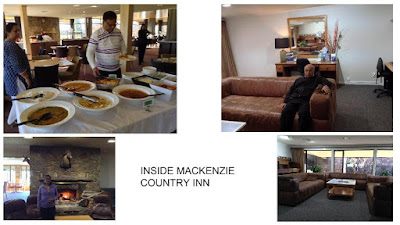 After lunch we relaxed for a bit in the lounge which had a rustic  old world charm. 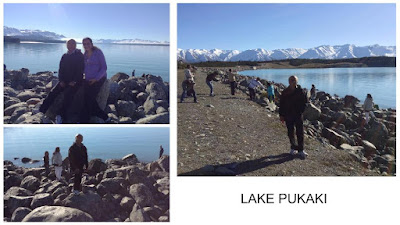 We continued our scenic drive and reached Lake Pukaki to savor more splendid scenes which mesmerized us. Lake Pukaki is the largest of three roughly parallel alpine lakes running north-south along the northern edge of the Mackenzie Basin on New Zealand's South Island. The others are Lakes Tekapo and Ohau. The glacial feed to the lakes gives them a distinctive blue color, created by glacial flour, the extremely finely ground rock particles from the glaciers. We saw two of those three lakes.

This magnificent landscape was the setting of  'The Lord of the Rings' and the Hobbit trilogies for the irresistible charm of the wild expanse with white mountain peaks embellished by the shimmering turquoise blue Lake Pukaki. 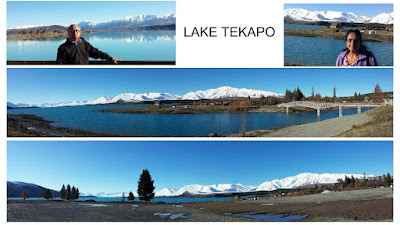 We had another halt after another hour this time at Lake Tekapo. It is the second-largest lake. Once again a glistening turquoise blue lake, a range of soft white mountains and azure sky  and brown mud - it was actually just two or three colors splashed on to an amazing canvas. Picturesque by day and dazzling by night, Lake Tekapo is part of a UNESCO Dark Sky Reserve, making it the perfect spot for stargazing. 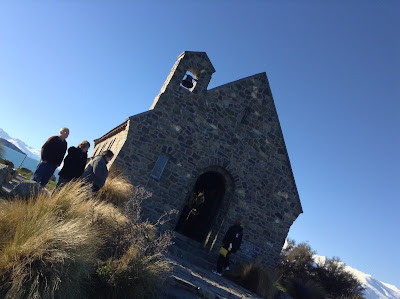 We walked to the quaint little church on the shores of Lake Tekapo - the Church of the Good Shepherd built in 1935 to satisfy their spiritual needs and commemorate their ancestors who braved the rigors of this harsh alpine environment. The highlights of the church are its sheer simplicity and the all-natural stones. One of the most photographed places in New Zealand, it features an altar window that frames stunning views of the lake and mountains. 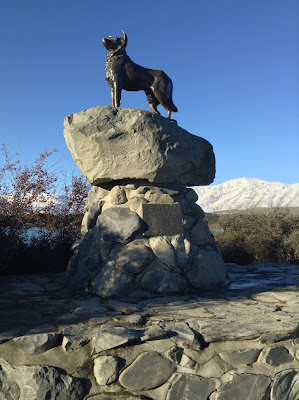 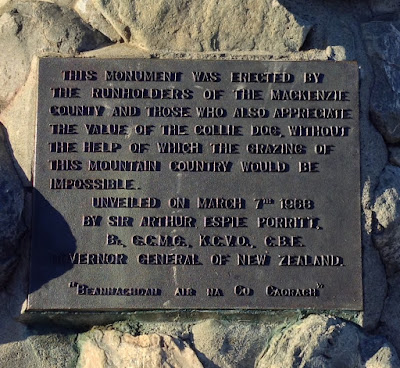 There is also a statue of the Collie sheep dog dedicated for its services without which grazing would have been impossible in this alpine terrain.

We continued our drive to Christchurch still craving for more of its saccharine sweet scenic attractions and reached there before 7 pm.  . 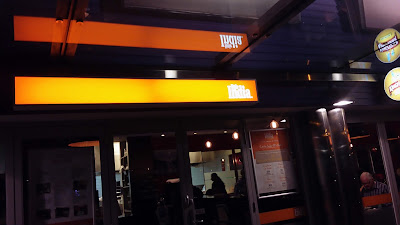 After dinner at 'Little India' ... 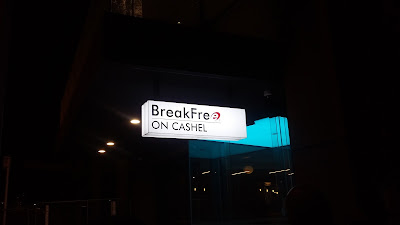 we checked in at 'Breakfree on Cashel' - we wouldn't get more than four hours sleep as we had to leave for Christchurch airport before 3 am.

We sailed through the formalities smoothly and our flight took off after 6 am. After a three hour flight, we reached Sydney. As it was raining heavily, our flight to Singapore got delayed by an hour. But as we had a three hour stopover in Singapore, we had no issues. From there we boarded the flight to Mumbai and landed there on time around midnight.

As we settled down to the sultriness, heat and dust of Mumbai, we couldn't help mentally going back to the cool, rather cold, pristine locales of New Zealand. Wow - that was one unforgettable experience! The haunting memories linger on ....!
Posted by brinda.balasubramonian-brins.blogspot.com at 12:46 AM