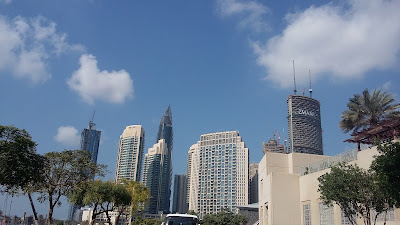 We drove from Dubai to Abu Dhabi, the capital of the Emirate of Abu Dhabi, the largest of the UAE's seven emirates, and the seat of the UAE Government. Abu Dhabi's rapid development and urbanization, coupled with the relatively high average income of its population, has transformed the city into a large and advanced metropolis. Abu Dhabi accounts for about two-thirds of the roughly $400-billion United Arab Emirates economy. Abu Dhabi is the fourth most expensive city for expatriate employees in the region, and in 2014 was the 68th most expensive big city in the world. 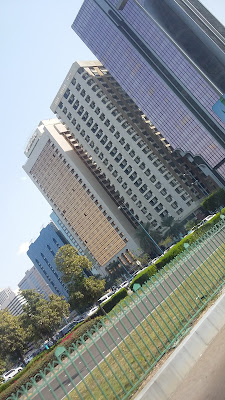 As we drove through the city, we could not help admiring the magnificent skyline ..... 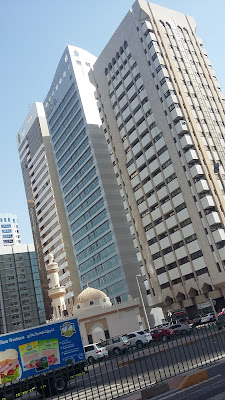 with skyscrapers of all colors and .... 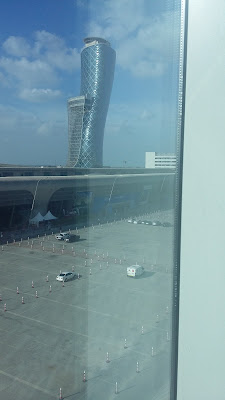 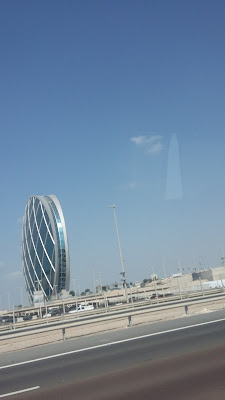 even a very unique coin-shaped building, called 'The Coin' - the Aldar Headquarters!

One of the most important and opulent architectural landmarks is the Sheikh Zayed Mosque. This is arguably one of the most important architectural treasures of contemporary UAE . It was initiated by the late President of the United Arab Emirates, HH Sheikh Zayed bin Sultan Al Nahyan, fondly regarded the father of the UAE. Its design and construction reportedly 'unites the world', using artisans and materials from many countries including Italy, Germany, Morocco, Pakistan, India, Turkey, Iran, China, the United Kingdom, New Zealand, Greece and of course the UAE. Natural materials were chosen for much of its design and construction due to their long-lasting qualities, including marble, stone, gold, semi-precious stones, crystals and ceramics. The sprawling monument took more than 10 years to be completed and can accommodate up to 41,000 people. As one of the most visited buildings in the UAE, the Sheikh Zayed Grand Mosque Center was established to manage the day-to-day operations, as a place of worship and Friday gathering and as a center of learning and discovery.

The Grand Mosque was the highlight of our visit to Abu Dhabi. We were clearly instructed about the dress code - all ladies are supposed to wear full sleeved outfit and cover their entire body as well as their head. Those who were wearing 3/4th sleeves were asked to put on a sweater / jacket. If the tourists did not have the outfit with the right specifications, they have the option of hiring costumes from there. Ladies have to go through strict security check. But the rules are not so stringent with the menfolk. They are allowed if they are wearing T shirts or half-sleeved shirts; but 'sleeveless' shirts and Bermudas / shorts are a strict 'no no'.

Once you have cleared the security check, you can relax and savor the magnificence and opulence of the Mosque. There are neat shelves for putting away your footwear. As you walk in awe admiring the mosque, you capture every aspect of it in your camera - thankfully there are no restrictions on photography - a truly big deal! 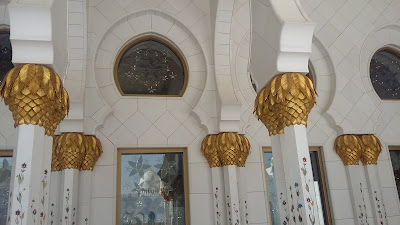 Tons of gold have been used in the construction - the pillars are adorned with chunky gold palm leaves. 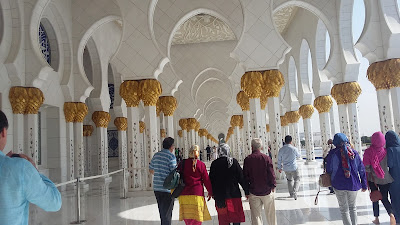 We can't take our eyes off the ornamented pillars. 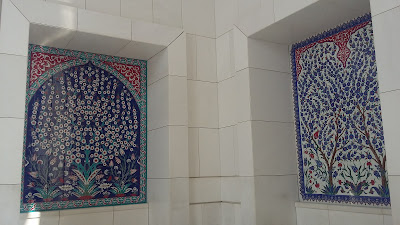 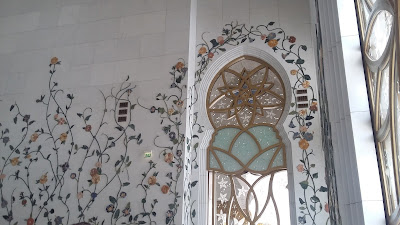 The walls are decorated with colorful motifs. 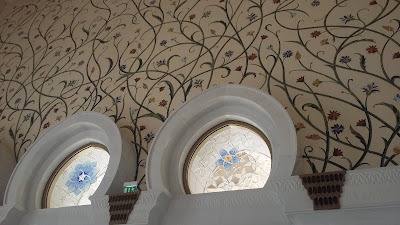 So too the ceilings. 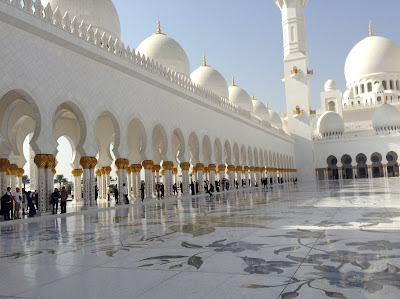 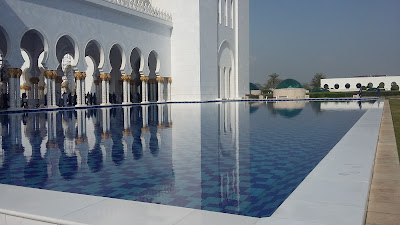 Take a look outside you can see the crystal clear water. 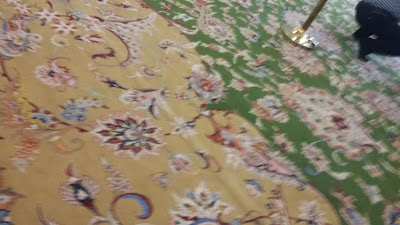 As we proceed further inside, we get to see the exquisite giant Persian carpet. 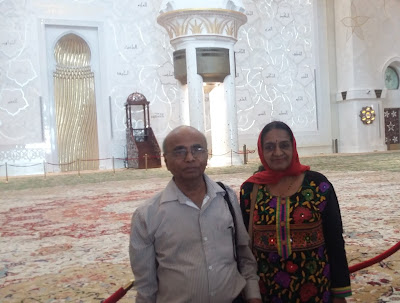 You have all the names of the Almighty on the walls. 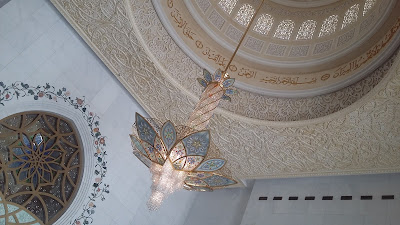 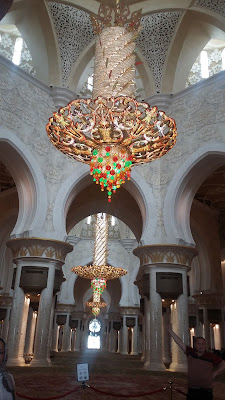 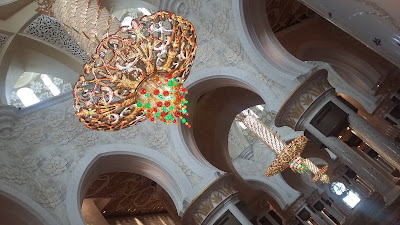 Look up and enjoy the magnificent chandeliers... rich opulence wherever you look! 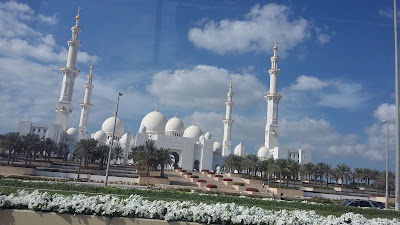 As you walk away, you can't help turning again to have glimpses of the snow-white mosque nestled among the greenery. In fact we were only too happy to spot the domes of the mosque during our drive and also from the top floor of our hotel! 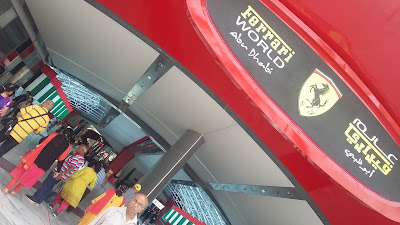 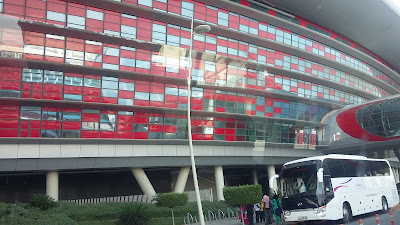 The next destination was 'Ferrari World'. 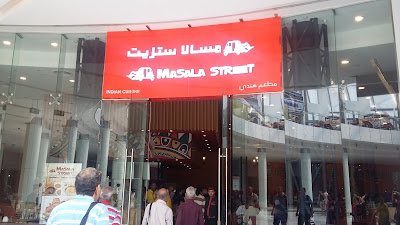 Our lunch was at 'Masala Street' at the Food Court of the theme park.

After we enjoyed the tasty Indian lunch, we were on our own exploring the various rides and pavilions of Ferrari World. 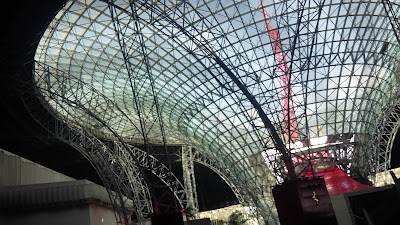 There were rides for all ages - from the fast roller coaster to milder Speedy Magic and a number of simulated rides. 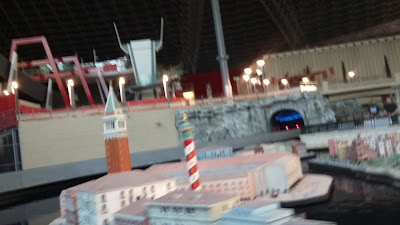 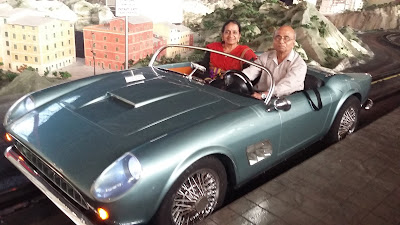 What we enjoyed the most was driving a Ferrari around Europe! The fact of the matter is you just have to sit and steer at will, the car will automatically take you along. Wonder whether we can ever have such a pleasure driving so in our cities?!

We walked back to Masala Street to replenish our energy with spicy 'bhel' and 'masala chai'. We were soon back in our hotel. After freshening up, we had dinner and were ready to hit the bed.

Next morning, we bid goodbye to the grand city of the Grand Mosque and drove to Dubai, some 100 kms. away. 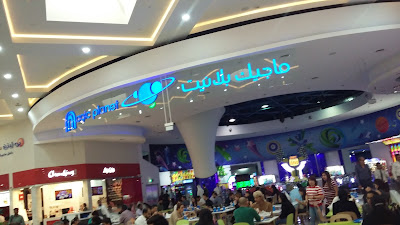 We had the entire day in Dubai, so we went to Deira City Mall and 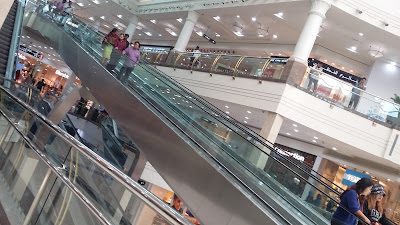 shopped till we almost dropped! 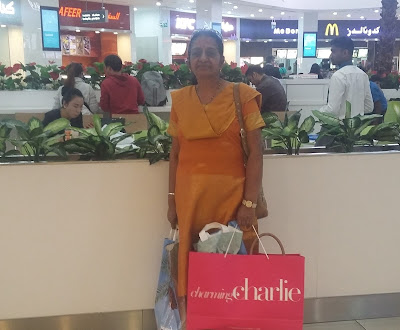 Many famous brands have their retail outlets in the mall. Carre Four is a popular super store that houses anything and everything at reasonable rates and caters to the masses. 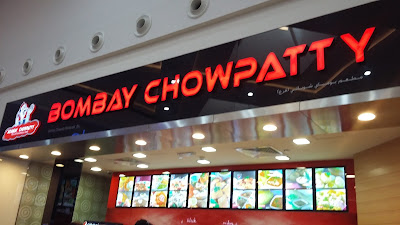 Around 6 pm, we were provided heavy snacks at the Indian restaurant 'Bombay Chowpatty' in the mall ........ 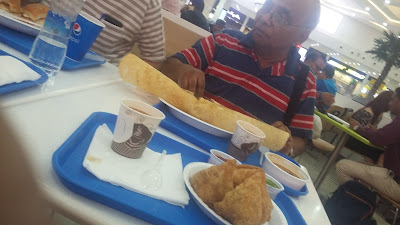 before we made our way to Sharjah airport to catch the late night flight back to Mumbai.

That was one memorable trip - relaxed,  strain-free, visually delightful and deeply satisfying. Bye Dubai! Till we land there again!

Posted by brinda.balasubramonian-brins.blogspot.com at 3:56 AM