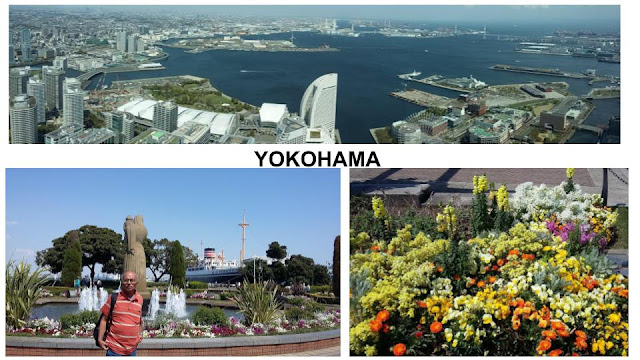 When we returned in February after a hectic 13 day tour of SE Asia, we felt we needed rest for at least three months before embarking on our next tour; also as we were getting older, our tours should be shorter and less strenuous. But nothing will put the reins on travel-maniacs. In March, my husband was researching about our next probable destination. As I have mentioned earlier, the tourist destination should be decided based on our preferences of course, and then the best time / season and then the suitable date and the Tour Company decided.

We had China, Japan, Korea tour in our bucket list (my husband has preferably been opting for longer tours as his logic is, 'thus far, a little farther'). But Korea (South, of course) was ruled out because of the tense atmosphere around its neighbor. We were physically not ready for yet another hectic tour, so China was out too. We were game for a short one of course. Japan was a good idea. Suddenly I remembered Japan's cherry blossoms (sakura). Oh when is the 'Sakura' season? A quick Google search enlightened us that it is a very brief season of less than two weeks, starting from any date after 20 March, beginning from the South of Japan and gradually spreading to the North during this period. This year peak was predicted to be around 29 March - 4 April. So we thought of booking for a date around the beginning of April.

Next we did online research of the tours of Japan by the tour companies we usually patronized. One of them had exorbitant rates. Comparatively, the second one had competitive rates. Still the tour prices for Japan were generally high. Our 13 day tour of 5 countries in SE Asia had cost us around 1.50 lakh INR per person. The Japan tour of 6 days would cost the same! We were told that hotels were very expensive and the cost of living, high. So that was okay.

There were quite a few tours during the Cherry Blossom season. If we were to tour Japan (or rather any country for that matter), we would rather do it during such special occasion when the weather is conducive too. But we were a bit late, as Japan was a sudden idea and the season was so near at hand (we didn't want to wait for another year!). It was the first week of March by the time we went to book our tour. We wanted to join a tour starting in early April. On checking online, the availability of seats, we realized there were a few seats left. But within hours, when we reached the booking office, they seemed to have been taken! So we had to settle for the tour starting on 8 April, which again had only a few vacant seats. We instantly took them, hoping that this year the 'sakura' would start blooming a bit late, for our sake! From then onwards, I'd keep checking the forecast of the dates of blooming of 'sakura' .... I was a bit disappointed that they were to bloom early this year; the peak season would be 4 - 6 April. I tried to do mental calculations and came to the conclusion that we would miss the peak by a whisker. Nevertheless, we were promised that we'd get to see the blossoms in plenty.

Our itinerary for 6 days included 6 cities - Yokohama, Osaka, Kyoto, Nara, Hiroshima and Tokyo. The weather in Japan would be cool and pleasant as it was the advent of spring; Mt. Fuji of course would be cold, so we needed jackets too. Japan's time zone is 3 1/2 hours ahead of IST. The Japanese currency is Yen and 100 Yen was at that time equivalent to 60 INR.

Our flight (Nippon Airways) took off from Mumbai Chhatrapati Shivaji International airport at 2030 hrs. It was an 8 hour flight. The timing was perfect as it was not a late night flight disturbing our sleep. After dinner, we went off to sleep and were refreshed after a mini breakfast by the time we landed at Tokyo's Narita International airport at 8 am local time.

As usual, there was a long queue at the Immigration but it moved quickly and we were done by 9 am. We claimed our baggage, and freshened up. We were a group of 30 and our Tour Manager was Sachin. Gradually our group members started collecting but the wait for the remaining ones seemed endless! We came to know later, that one of them had their bag missing, as another Indian tourist had walked away with it, mistaking it for his identical one. It was only after coming out of the airport, that he realized the mix-up. But he was not allowed to re-enter. Meanwhile the respective Tour Managers of both the persons got in touch on the phone and sorted out the matter. It was almost 11 by the time our coach left the airport. We were joined by our local guide Iako and her assistant Toshi. Iako was a bubbly young lady, very fluent in English (she had spent a couple of years in the US, studying), and enlightened us about the various aspects of Japan and its culture and lifestyle during our drives. Toshi was less vocal and more active with the errands.

We had to catch the flight from Tokyo domestic airport to Osaka only at 5 pm. In the meantime, we were to drive to Yokohama and back. As we settled down, each of us got our packed breakfast boxes of pancakes, muffin, banana, yogurt and juice. Unlike some countries in SE Asia, there was no restriction about eating inside the coach. Of course, each seat had a plastic bag for dumping trash.

In less than an hour, we reached Yokohama city. Our first halt was Yamashita Park. 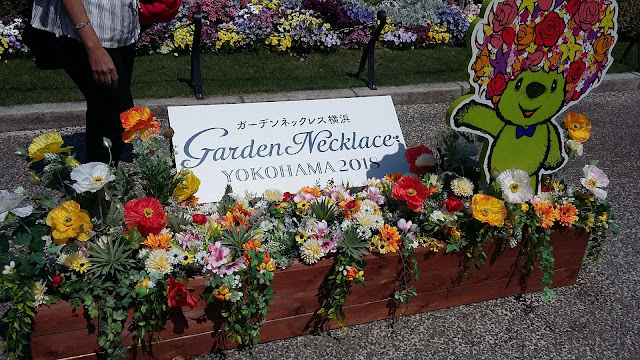 Formally opened on March 15, 1930, and requisitioned in 1945 during the Occupation of Japan for military housing, it was reverted to Japanese control in 1960. It is famous not only for its public green space with trees, flower beds, fountains, and memorials, 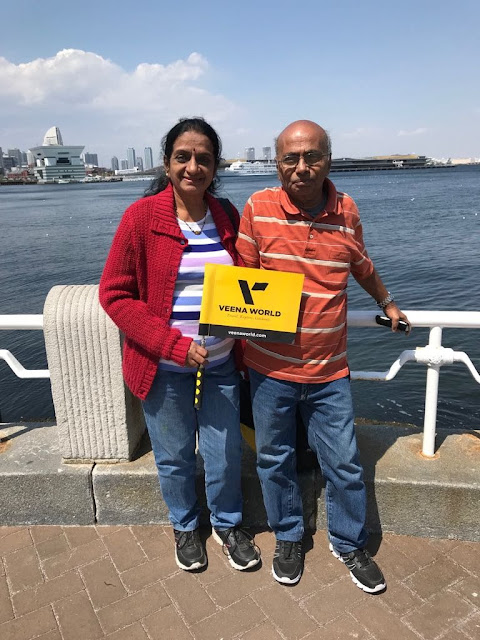 but also for its beautiful waterfront views of 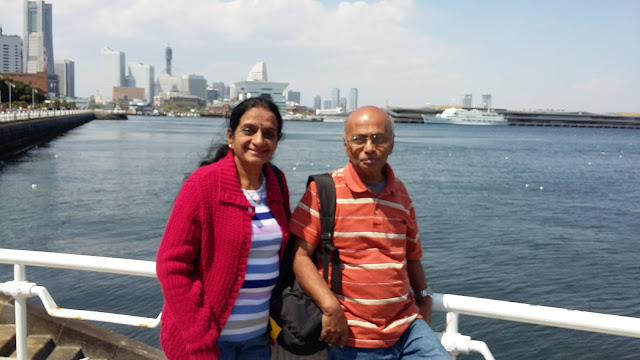 the Port of Yokohama. 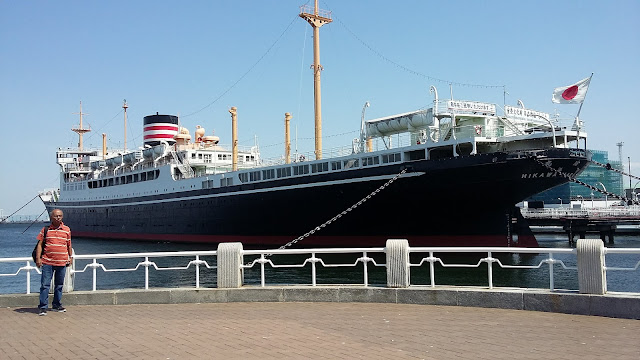 This is also the location of The Hikawa Maru, a Japanese ocean liner built in 1929, now a museum ship. 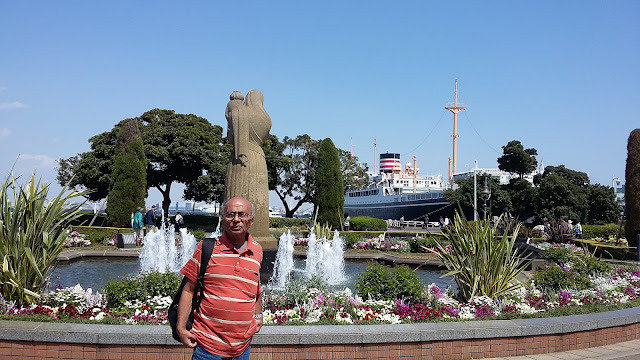 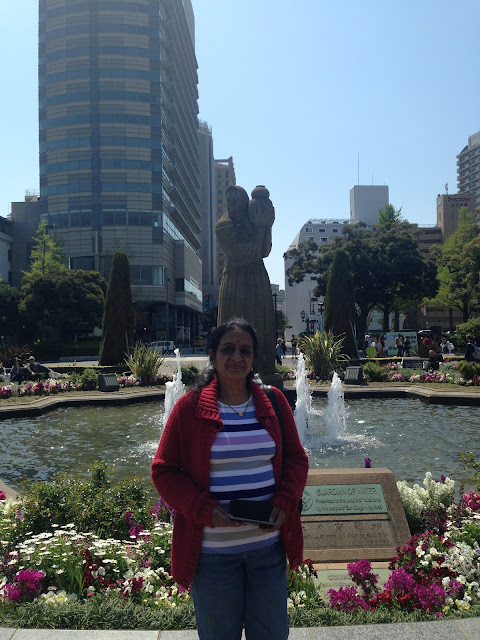 The' Guardian of Water', a Donal Hord sculpture, was gifted by Yokohama's sister city San Diego in 1960. A replica of this sculpture is located in front of the San Diego County Administration Center too. 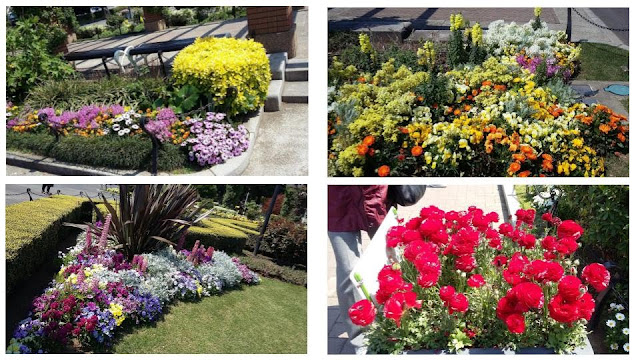 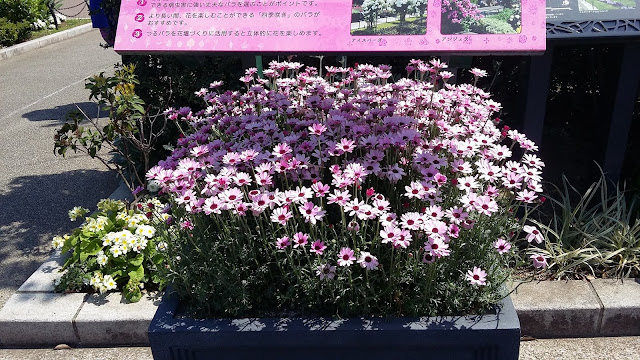 We strolled around the park for half an hour, enjoying the colorful flowers and the beautiful waterfront views. But our eyes were on the lookout for 'sakura' flowers. 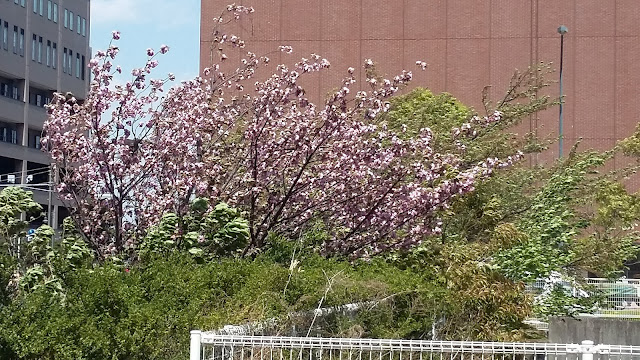 We did manage to see a few trees with a few blossoms and felt excited at the first glimpse. Even during our drive, we sat with our eyes glued to the window and fingers ready to click pictures of cherry blossom-laden trees! But most of the trees lining the roads were barren, having lost the flowers due to the snow a couple of days earlier. So even the scantiest of the white / pink blossoms sent us into raptures. We were assured that was just a trailer, the film would unfold in due course! Or you could say, that was just the starters, the feast would be laid out later! 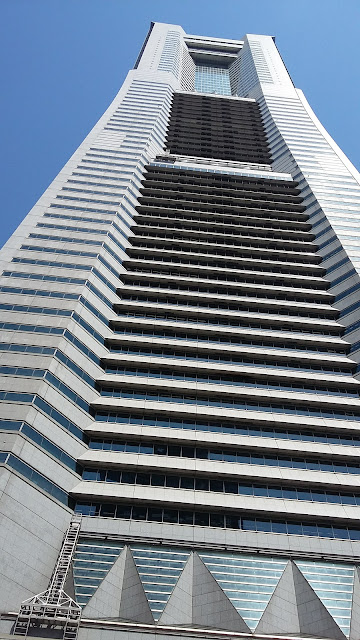 Next we went to Landmark Tower, the 2nd tallest building and the 4th tallest structure in Japan, standing 296.3 m high. It looks different from all the rest of the Towers we had seen in many countries - which were mostly satellite towers with a few restaurants located at some levels. This Tower houses a five-star hotel which occupies floors 49-70, with 603 rooms in all. The lower 48 floors contain shops, restaurants, clinics, and offices. 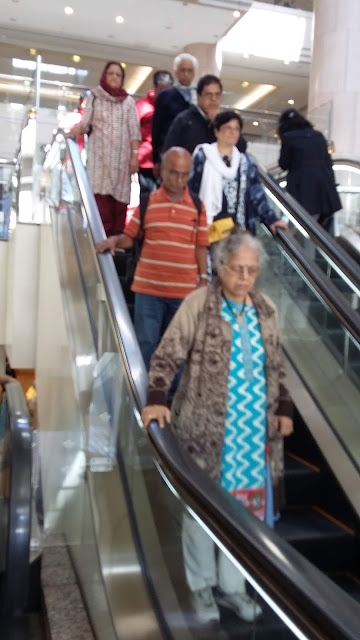 Actually you have to use the escalator to reach up to the 5th level, halting if you wish, to look around 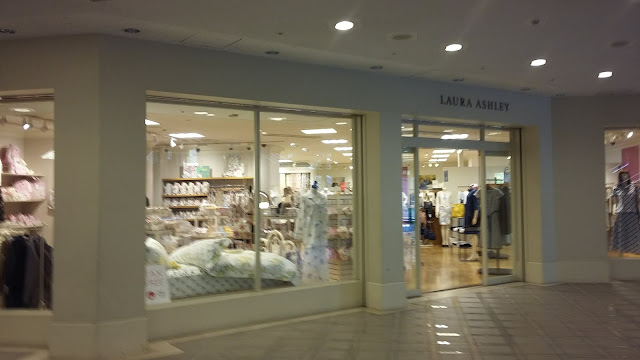 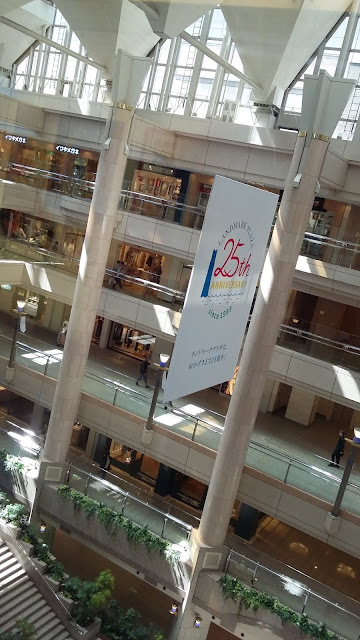 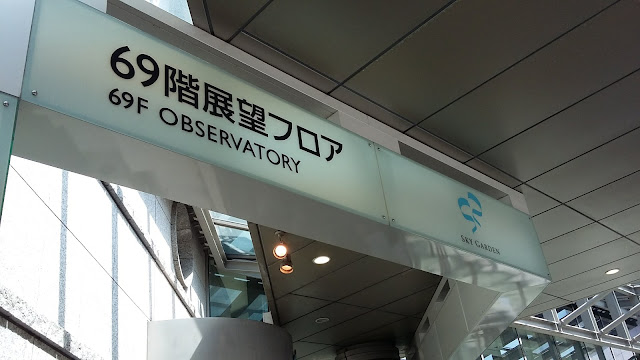 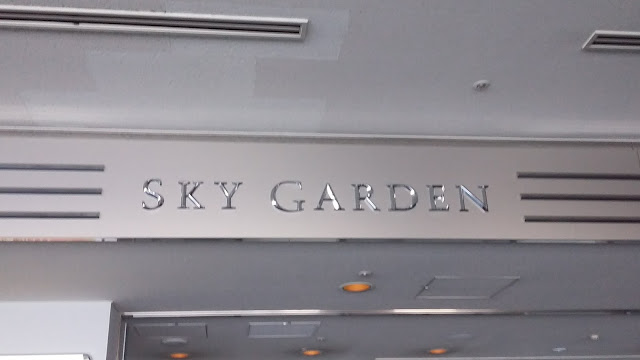 On the 69th floor is an observatory, 'Sky Garden', which provides a 360-degree view of the city, and on clear days, of even Mount Fuji. 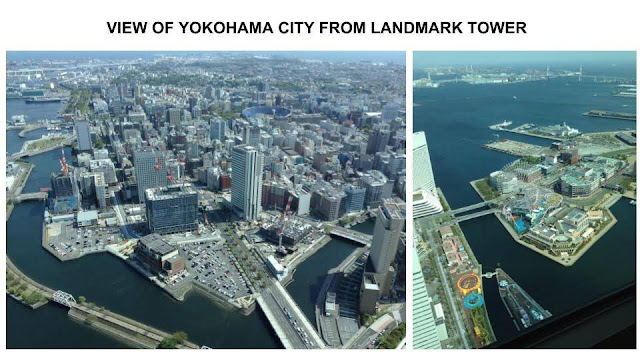 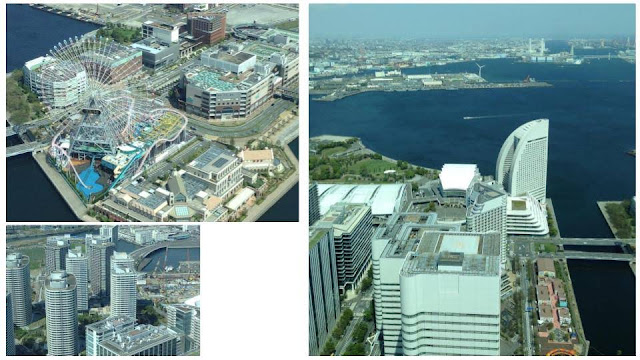 The views of Yokohama, a relatively small city, were simply astounding. 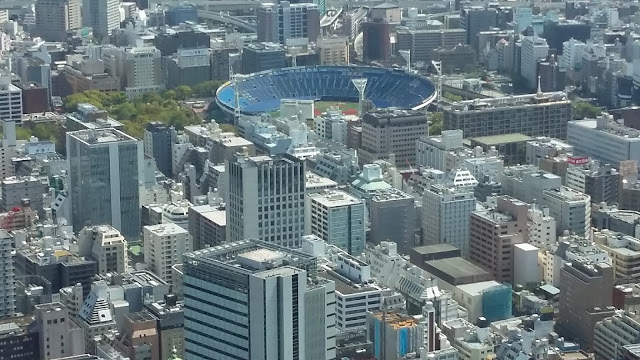 You can see the concrete jungle and very few roads.

It was time for us to drive back towards Tokyo (I noticed a place called 'Kawasaki' on the way). 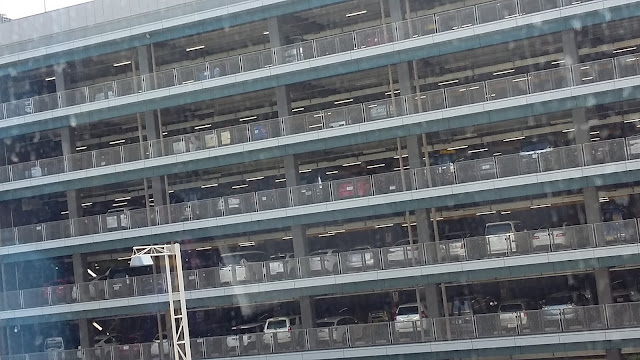 The multilevel covered parking areas in some places were interesting - most people use public transport or even bicycles. Taxis are expensive. Only the rich can afford cars. Most Japanese people traveled on foot until the later part of the 19th century. Now train is the best option - the peak hours are 7 - 9 am and 6 - 10 pm (many Japanese work overtime). To manage the crowds boarding the trains at these hours, there are professional 'pushmen' to push the commuters in! The first railway was built between Tokyo's Shimbashi Station and Yokohama's former Yokohama Station  in 1872. Many more railways developed soon afterward. Today Japan boasts of one of the world's most developed transport networks. Mass transport is well developed in Japan, but the road system lags behind and is inadequate for the number of cars owned. This is due to the fact that road construction is difficult in Japan because of its uniquely high population density, and the limited amount of available usable land for road construction. To maximize the efficiency of roadways, expressways run at a higher level than the city roads and monorails, underground.

We reached the domestic airport at 2 pm. After group check-in for our flight to Osaka, we settled ourselves in the lounge and opened our packed lunch. Surprise! A complete Indian meal opened up - complete with rice, rotis, dal makhni, mixed vegetable, paneer sabji, and juice! 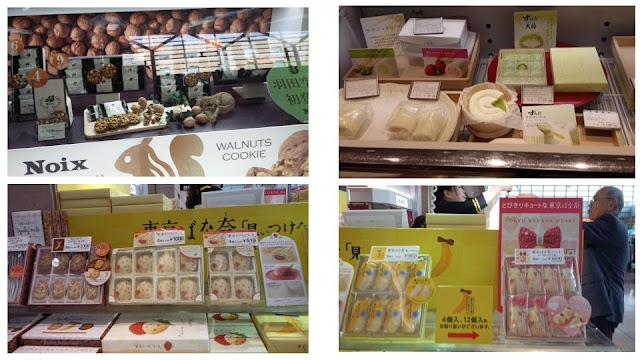 We loitered around, taking a look at the shops selling Japanese  delicacies.

Then as we went for security check, we were able to use the 'special status' facility, being senior citizens, which helped us skip the long queue. As we were waiting for boarding, we tried to mingle and get acquainted with our group, most of them, senior citizens.

After an hour's flight, we landed in Osaka. 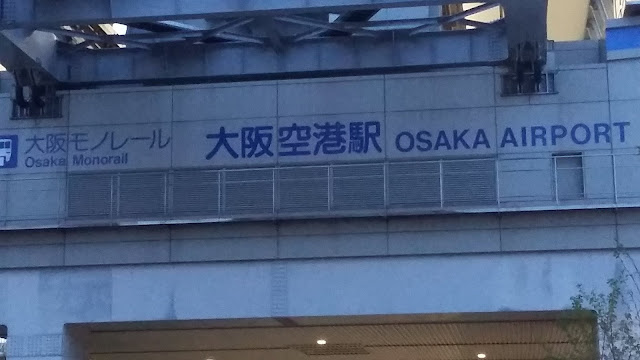 We collected our baggage and boarded our coach. Our guide informed us that the Monorail station was located close to the airport for the convenience of the public. Also convenient stores are located close to all stations, so the commuters can do their marketing while returning home from work. What a wonderful system! 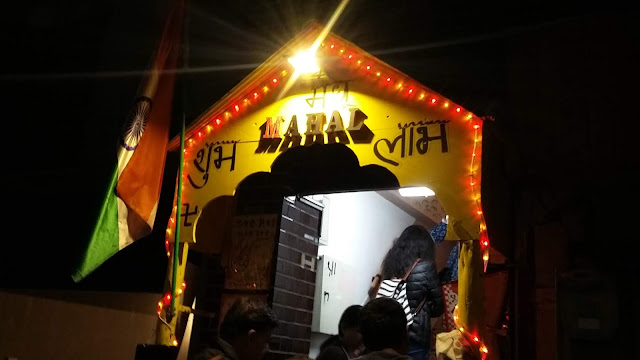 It was early dinner at Madhu Mahal - at 7 pm - a great Indian meal which all of us relished. 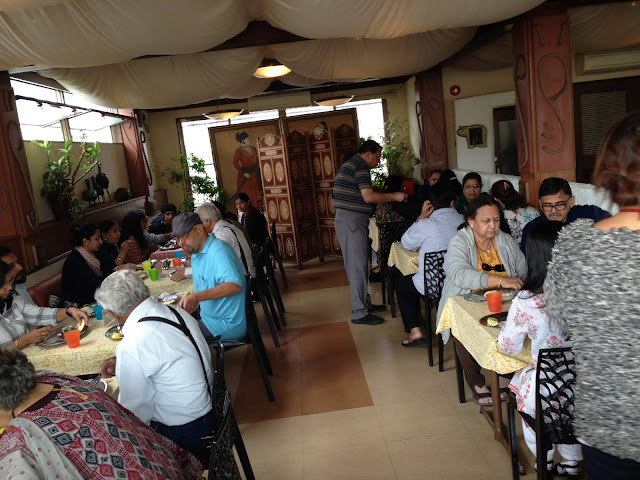 The restaurant was upstairs, there was space crunch, just enough space for around 32 seats. 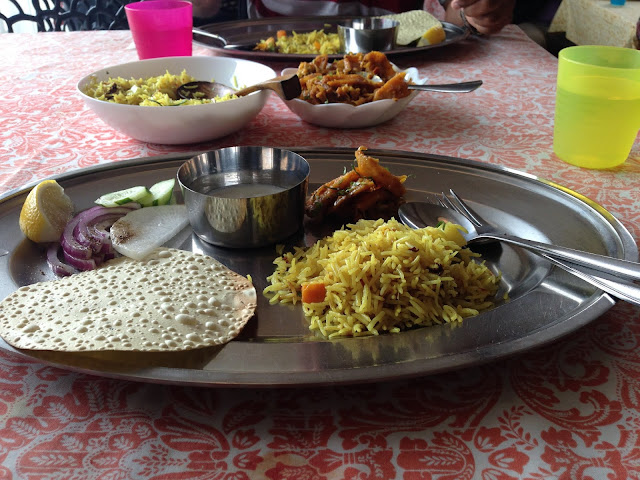 Usually it would be 'sit down' dinners with bowls of dishes would be served at every table. We were told that it would be similar with all restaurants in Japan. 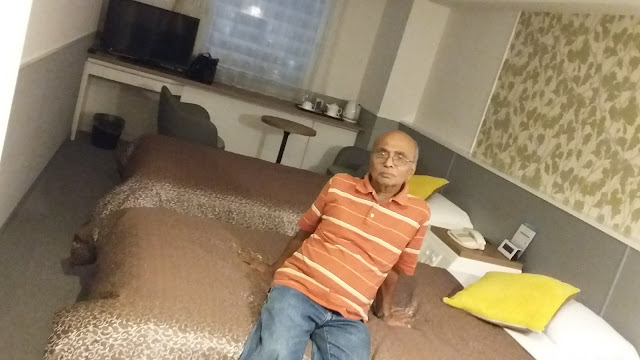 Then we drove to Hotel Osaka Plaza and were glad to check into our rooms. 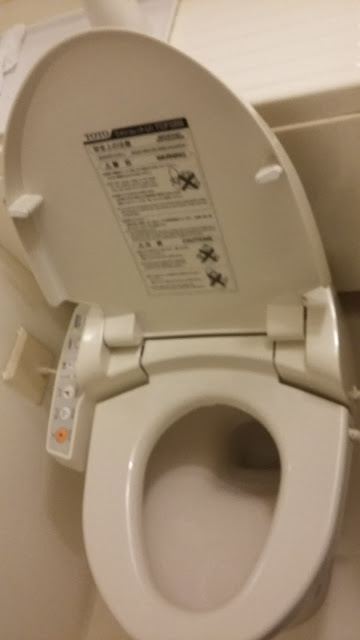 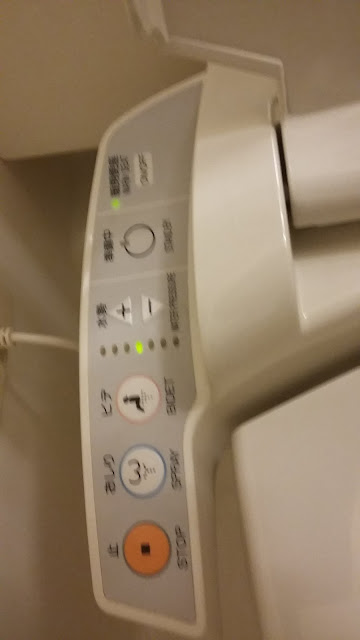 It was when I went to use the restroom that I noticed that the toilet seat was warm and welcoming. As soon as I sat, I could hear water spraying around the pot for a few seconds. Meanwhile I noticed the buttons on the right side. After the business was done, I had to press the button of my choice to decide the type and temperature of water spray for the wash. It was so cool - rather so warm - I mean, the hands-free bum-wash experience! In some restrooms, the seat cover too would automatically open and close. 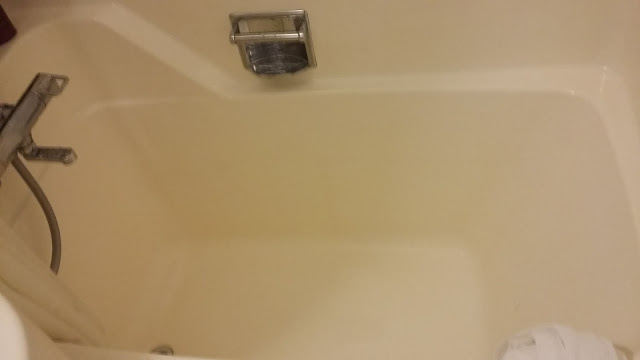 Oh, and the bath tub was deeper but lesser in length than the standard ones! Another thing I noticed was that the restroom was almost two feet higher than the room's floor. A step would have been welcome. When I mentioned this to my husband, he brought out a low stool stashed away in a corner of the room. That was indeed a thoughtful gesture on the part of the hotel! A quick hot shower rejuvenated us and we enjoyed a good night's sleep.

The next morning, we were ready for the itinerary of the second day.
Posted by brinda.balasubramonian-brins.blogspot.com at 12:39 AM