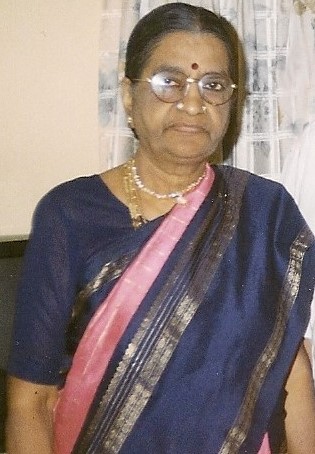 It's my mother's 10th death anniversary today. How time flies! 10 years - since my mother turned silent! It seems like last week that she was talking to me on the phone - touching on numerous trivia - a, b, c, d, e ... then again c, then some more on a ...... My Amma just loved to talk - on anything. No gossips, people! She had the guts and honesty to call a spade a spade, so there!

As I have already posted write-ups on my Amma a couple of times, I am focusing only on one of her fads - talkativeness. (Click on each of the above highlighted words to view my earlier blog posts.)

I can't help remembering that occasion when just the both of us were travelling by car from Navi Mumbai to Pune. It was at the end of the journey that I realized that all through the two hour drive, she was doing the talking, while I had no inputs except oh, hm, aha ..... And mind you, she didn't even need a sip of water. Yes, none of us could beat her at loquacity.

Amma not only maintained a good rapport with relatives and neighbors but also indulged in fruitful conversations with them. In fact she would chide us for not being chatty - and not without reason! Her claim was, "You get to exchange and share ideas and news only when you open up with others". Very true! Two interesting incidents come to my mind in this connection.

Amma had come to our place to help us with my second delivery. She would have preferred to have me at her place instead, if she had her own way. She was a bit nervous, sort of fish out of water, being away from her comfort zone, away from the proximity of her mother during such a time. She felt she could do with some well-wishers and advisers during the post-delivery care. We were staying in a cosmopolitan campus and had quite a few friends, mostly young. A South Indian family had moved in a month ago, two houses away, but we had not yet called on them - they were quite a senior couple - almost a generation apart, with two sons past their teens and a ten year old daughter. Amma wanted to befriend the mami and mama. I accompanied her to their place. After a few exchanges, we came to understand that both families were Palakkad Iyers. Nay more, both belonged to the same place - Manjappara. Hmmm .... interesting. That mama (MRS) then asked my father's name and I said, 'N.D. Rajan'. Amma got excited and started giving details of her inlaws - her father-in-law was Mr. M.D. Narayana Iyer, who had retired as Chief Engineer, Cochin State, and was based in Ernakulam. MRS mama said, "M.D's second son Dharmarajan was my close friend and classmate in school." Amma couldn't control her excitement, "That's my husband - shortened his name, you see!" Oooh! That was some coincidence! When we informed my Appa about our neighbor who happened to be his buddy, he was counting days for his visit to our place, to meet not only his new grand kid but also his good old friend. Needless to add, mami and mama became our closest friends despite the age difference! Amma would have her last laugh as she'd often quote the incident to prove her point, "See how it pays to build up your conversations!" She did have a point there! 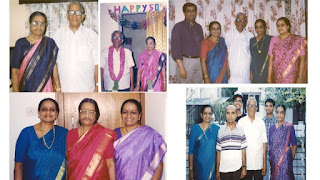 Now another episode. When my father was in service, we used to move all over India, but after his retirement, my parents settled in Madras (now Chennai). Come festivals, and Amma would celebrate all with great fervor. I had spent my formative years with my paternal grandparents, who were more scientific and hence low-key in ritualistic-religious matters. Their refrain used to be, "kaattu kozhikkundo makara sankranti?" (What does a jungle hen know about the festival of makarasankranti?). I turned out a cross-breed - my outlook was partly influenced by them, partly by my parents. So I could be called a 'naattu kozhi' (country hen) - modifying festivals / celebrations to suit my convenience. All major festivals would be celebrated at my place with the respective 'neivedhyam' items (again thanks to Amma's training). But when it came to minor ones, (for which I didn't have a holiday), I'd shelve it. One such festival was 'kanu' (which comes after 'pongal'). Amma was once visiting us during that period. She was not particularly happy with my 'steel pongal paanai', that too without the traditional 'manja-kannu' (fresh turmeric plant / leaves) adorning its 'neck'. I told her that 'manja-kannu' was not available in Pimpri (I'm talking of the early 90's, when South Indian items like even 'pearl onions' and 'naarthanga' had to be carted from Madras during our visits). I think the sugarcane and of course the 'pongal' appeased her to an extent. On the day of 'kanu', I had to leave home for work as usual at 6.45 am, so I had made no preparations whatsoever. Amma was aghast - how could I not celebrate 'kanu' - it seemed to be nothing short of blasphemy. So she prepared the yellow rice, curd rice etc and placed it on a banana leaf along with sugarcane pieces and jaggery - minus the fresh turmeric.

Now comes the twist in the story. A couple of days later, I took Amma to meet my neighbor on another floor, whose ma-in-law was also visiting her. Amma being Amma, it took no time to break the ice - there she was chatting away - as if with a long-lost friend. Soon she popped the inevitable comment to my neighbor - "What sort of place is your Pimpri! You don't get even 'manja-kannu'!" To my joy, my friend replied, "True aunty. 'manja kannu' is not availble in the local market ..." I couldn't help interrupting jubilantly, "See I told you ...". This time my friend's mother-in-law blurted out, "But mami, we have 'manja-kannu' in our pots - which we have kept on the terrace." She then turned to me and said, "You shouldn't have hesitated to ask for it. Haven't you seen our plants on the common terrace?" I was left red-faced, even as Amma scored one more point in favor of her chattiness. I should have acknowledged, "Amma, tussi great ho!" But did I? I was not garrulous enough then ..... 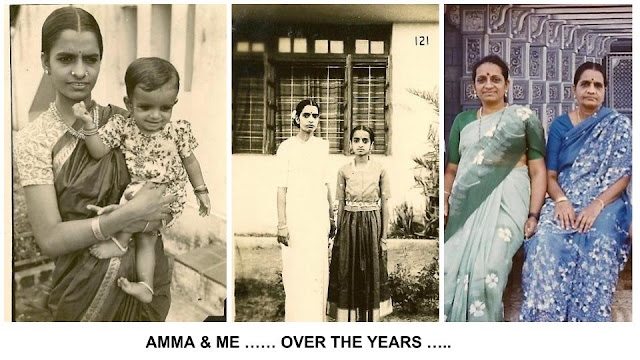 But I have improved over the years, I guess. So all I want to say now is, "Truly, Amma, we miss you so much!"

Posted by brinda.balasubramonian-brins.blogspot.com at 12:00 AM