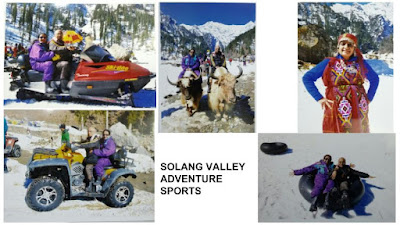 We started our drive from Shimla to Manali  after breakfast. 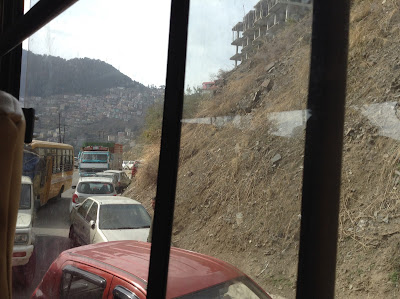 The roads were narrow and winding, the traffic was bad, with hazardously parked vehicles adding to the woes, but hats off to our driver for safely plying us around. Looking back, I really wonder whether I would undertake another trip to Shimla! 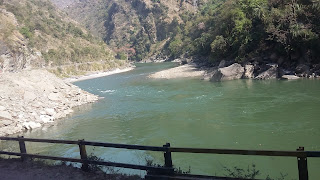 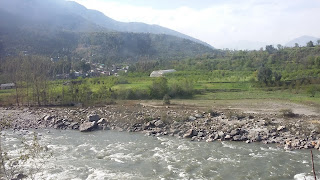 but no snow-covered peaks in March end. After an hour's break for lunch, we continued the drive, 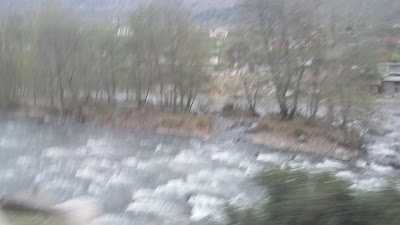 enjoyed the sight of the frothy Beas River and reached the Shawl factory at Kullu in the evening. 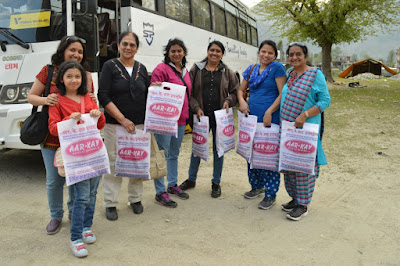 We spent an hour there, mainly shopping for kurtas, shawls, stoles and sweaters. Another couple of hours' drive, and we reached Manali after being on the road for almost 12 hours. 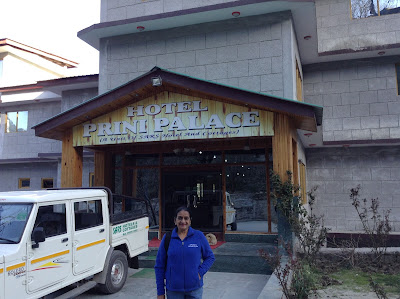 Our hotel, Hotel Prini Palace, was sitting pretty on a hill and our bus could not go up there. So we were taken in cars / jeeps. We checked into our rooms and were glad to stretch ourselves. 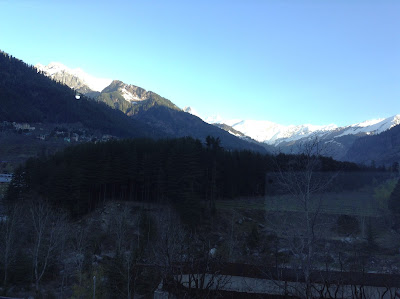 As we woke up next morning and looked out of our window, we couldn't help gasping in awe - there was this snow-covered mountain right there, glistening in the first rays of the sun. The snow that had eluded us in Shimla was making up by greeting us. But the apple trees in the foreground looked pathetic - brown, dry and barren!

After breakfast, all of us excitedly got in our cars to drive to Solang Valley for snow adventure sports activities. Before that, we had to stop at a small shop to hire 'Dangri set' (one piece snow jumpsuit, gloves, and gumboots) at Rs. 250 and buy woolen socks at Rs. 100. 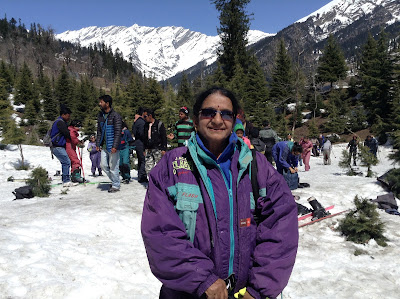 We were already wearing sweaters / jackets and over these we put on the Dangri set. 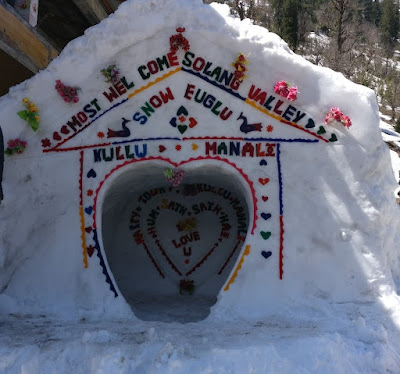 In fifteen minutes we reached Solang Valley, where Nature had laid out tons of snow. All of us were geared up for all the adventure sports activities - 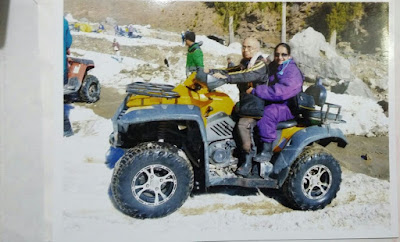 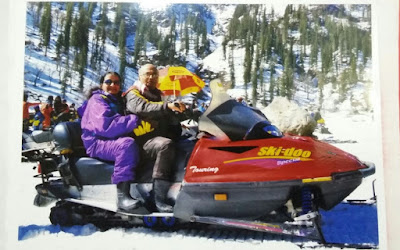 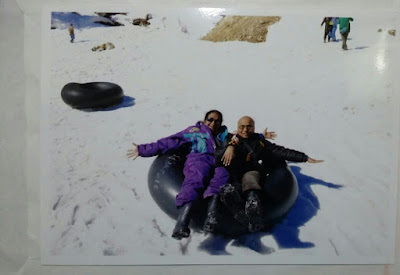 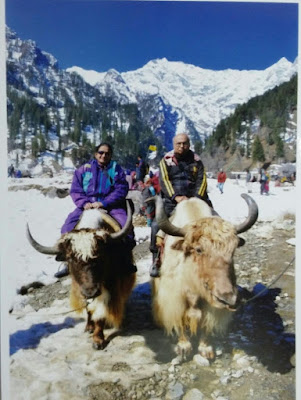 Yak Ride - all could be done for Rs. 800 per person. If you wanted to Ski (actually walk a couple of steps with ski gear on), you had to pay an additional 100 Rs. You could have your pictures taken at Rs. 40 per photo - only you had to tell them how many photos you wanted them to click. Actually the Bike and Scooter were driven by the service providers but the photos had just us, the couple. Definitely it was a once-in-a-lifetime experience. What we didn't experience were - Zorbing, Paragliding (off season) and Helicopter Ride.

Then there were those enterprising Himachal tribal ladies and men offering dress and accessories on hire for Rs. 150 per person.  They agreed to just wrap the attire around my 'Dangri set' as I was not willing to get out of it. 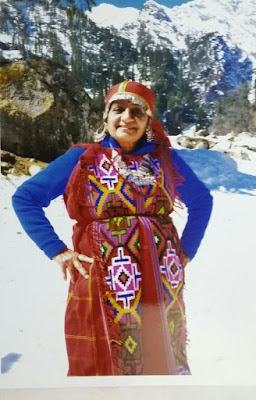 Of course I was happy to get my photo clicked.

Then we started walking on the snow towards Gondola cable car ride point. On the way, the child in us emerged, as we picked up the soft snow, made snowballs and playfully attacked one another. There were spots which were rather dirty and ill maintained. Some of us slipped and fell on the snow and took care to tread cautiously on the soft snow and not on the slippery, hardened ice.

The 1.3 km cable car ride with a vertical rise of 500 m, provided us a fabulous view of the snowy landscape before depositing us in the wilderness of the white sheet of snow. Wilderness? Not really - there were scores of tourists having a blast there. 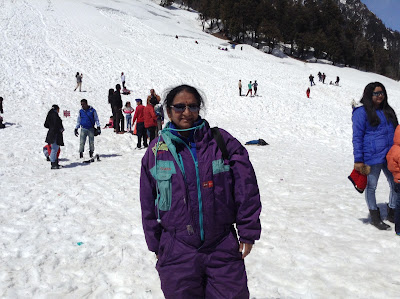 The 45 minutes we were allotted there did not seem enough - yeh dil maange more! 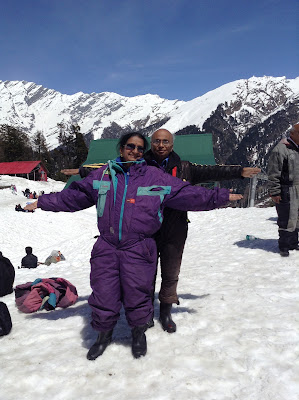 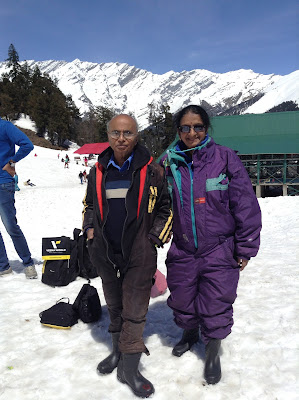 We tried to find isolated spots to click pictures on the snowy slopes. As we returned to the hotel after returning our gear, we requested the Tour Manager that we would like to return to Solang Valley the next day too. 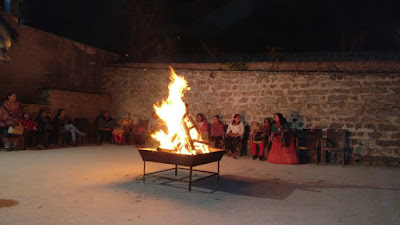 In the evening, we gathered outdoors for bonfire and 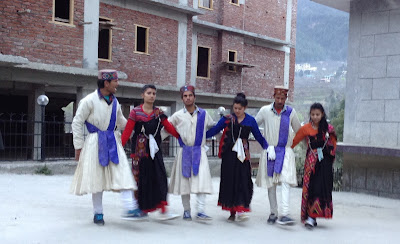 The next day we were promised more snow. We drove close to Rohtang Pass but it was not open. That was our first disappointment. 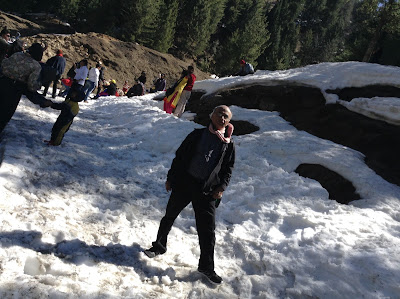 Then we were offloaded at the foot of snow-clad mountains and allowed to frolic around. 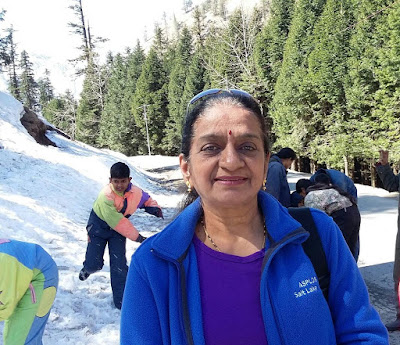 One thing, we didn't have our gear on, secondly there were no adventure sports activities. The group expressed their uproar at the terrible anticlimax - it was as if we had been treated to 5 Star Hotel experience the previous day and to a 'Dhaba' (street-side restaurant) the next day! Disgruntled, in half an hour, we boarded the bus to the next destination in the day's itinerary. 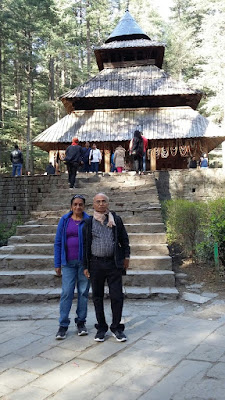 We visited a couple of temples - Hidimbaa temple, and 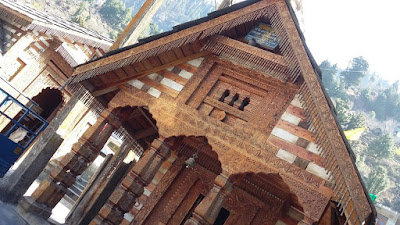 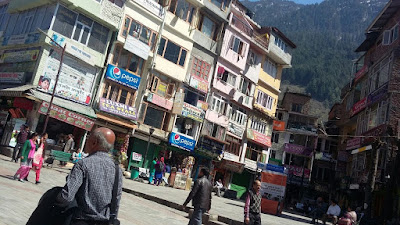 After that, we drove to Mall Road of Manali for shopping. This was a very small shopping area - just one street, and not too many shoppers. We found decent deals for shawls and kurtas as well as for dry fruits.

That evening we had fun at our group's get-together with music and dance. 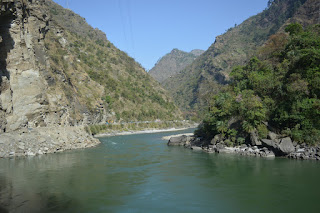 The next day, we bid adieu to the snowy mountains of Manali in the backdrop our hotel with a heavy heart, and started our drive back. We had a brief halt after two hours when we climbed up the steps to reach Vaishnomata Mandir as well as the Kali, Saraswati and Shiv temples.

Another 30 minute drive brought us to the place we were to do river rafting on the Beas River. We were briefed about the activity. Then we went in groups of 6/7 in rafts manned by a professional. 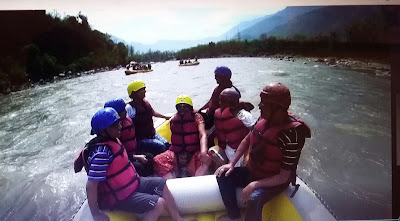 We put on our life jacket and helmet and seated ourselves. We could take turns to use additional oars. We opted for the video-recording of the experience to be done by our oarsman with the camera attached to his forehead - at Rs. 200 per person. He would give each of us the recording in our mobile phones / laptops. 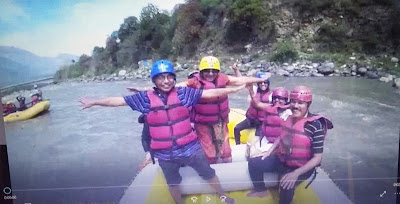 It was great fun to be tossed up and down and sideways in the rapids as everyone screamed. As if the waves didn't do enough, our oarsman too splattered the cold water on us. 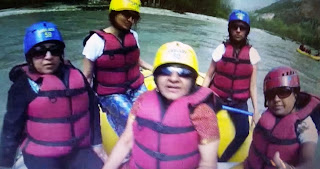 By the end of our 30 minute rafting, we were drenched to the skin but still in high spirits.

We had a towel and a set of dry clothes handy and we used the washrooms to dry ourselves and change. We got hot tea - something that was most welcome at that moment. This experience seemed to be the crowning glory of the tour.

After lunch on the way, we had a long 6 hour drive to Chandigarh. A steaming hot lavish spread awaited us at Hotel Medallion when we landed there at 10 pm.

Posted by brinda.balasubramonian-brins.blogspot.com at 8:25 PM