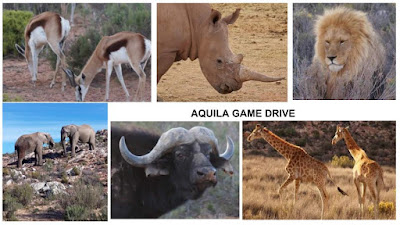 After a tour of Oudtshoorn, the next day we started driving from George to Albertinia and beyond - to Aquila Private Game Reserve.

It was a long drive, first among the mountains. Our guide Melody 'mausi' pointed to the mountain near George where Hanse Cronje's plane had crashed.

The roads were excellent and traffic close to zero, so we enjoyed the long drive of 4 1/2 hours with a couple of breaks. The toilet break was within an hour and the coffee break another hour later. But none of us needed to use the restroom then. After a drive of an hour, the men folk in our bus wanted to know when the next restroom break was. There was no scope for that, according to our guide Melody. Discerning the gentlemen's urgency, she requested the coach captain to halt the bus at a suitable spot and told the men to jump out and finish their business! Unbelievable, right? When they returned to the bus within minutes, there was relief written all over their faces!

After the mountains, we passed through arid lands.

The long drive was barely noticed - everyone in our group was a Tansen or at least 'Kaansen', so I ventured to conduct special rounds of 'Antakshari' (a la Annu Kapoor on TV in the late 90s) and every couple was belting out the right songs.

As we were drawing close to Aquila on Western Cape, the temperature started dipping. Interestingly, we were informed that Aquila is a malaria-free zone.
. 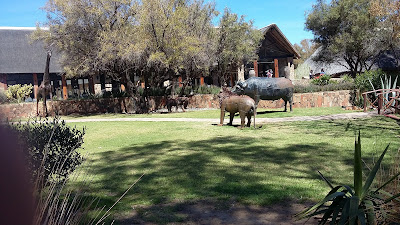 We reached Aquila Private Game Reserve, where we had been booked for our stay. It was an interesting place with thatched roof cottages around. 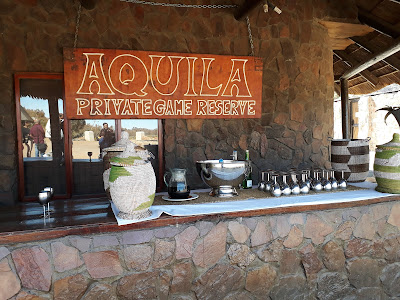 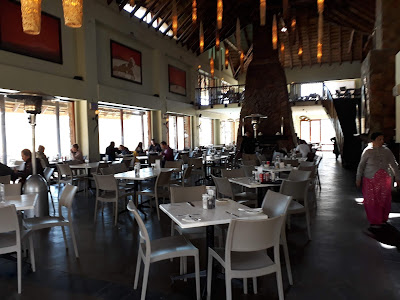 the dining hall and helped ourselves to 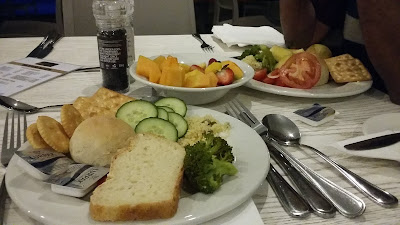 You will believe it when I say that our lunch, and dinner were almost similar - the only two non-Indian meals of this tour, and not bad at all. Salads, bread, crackers, fruits, ice cream - that was the only kind of stuff both of us had .... 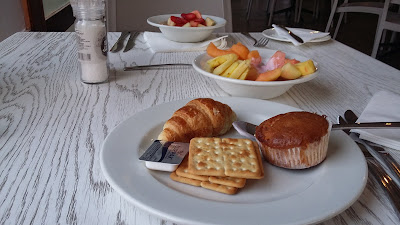 Not very different was the next morning's breakfast too - fruits were the main intake! 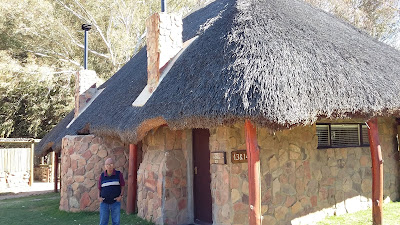 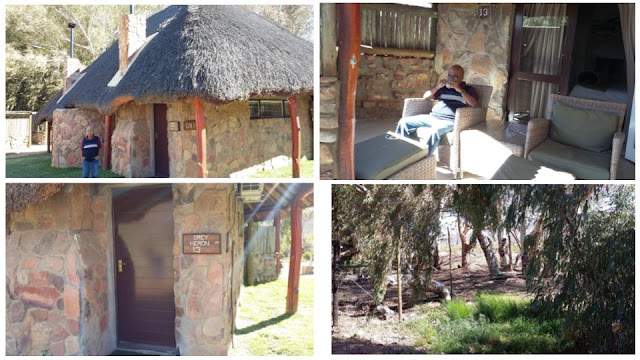 Oh they looked so primitive from outside but had all the modern amenities inside. 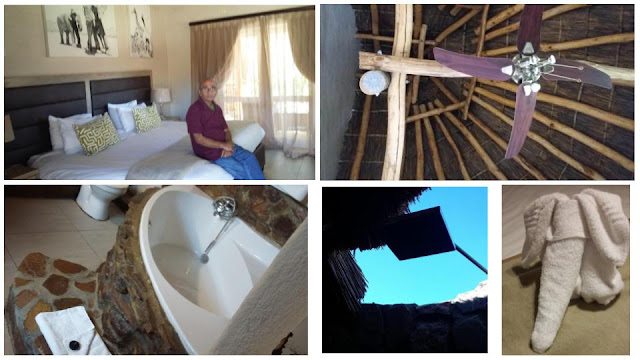 Fan - yes, air conditioner - yes, bath tub - yes of course, shower - oh yes, but it peeped in through a slight opening on the roof. And a white towel-elephant was sitting pretty on our bed to welcome us!

What was missing in the room? TV, WiFi, and .... the basic telephone! Our poor Tour Manager had to knock at every cottage early next morning for the wake-up call! And wait, what bugged us most was that the power point would not hold our plugs, so  our cell phones were all on their death beds. 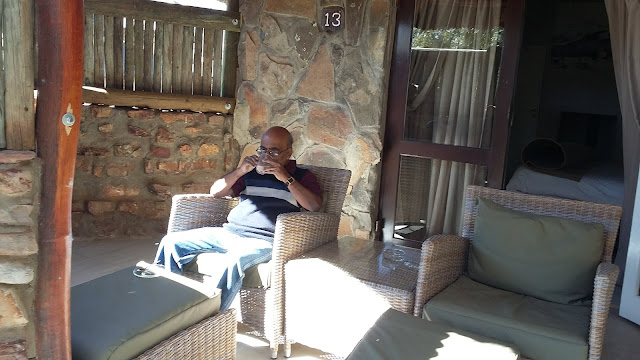 We made ourselves hot coffee and enjoyed it on the rear veranda which was overlooking wilderness.

In an hour, we were all ready to go on our two hour game drive in our all-sides-open vehicle, starting from our resort. Our skinny driver-guide was fluent in English.

It was unexpectedly cold and windy. As mentioned earlier, we believe in travelling light, so we had just packed a sweater each and stoles. So we tried to manage with them. 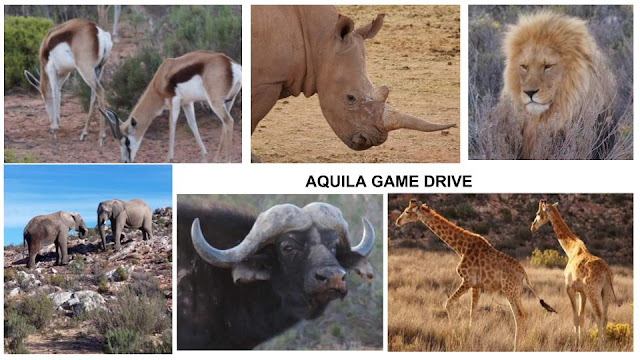 In fact for he first half of the game drive, we never realized the chill, engrossed in our lookout for animals and enthralled on sighting them.

Later we remembered Melody telling us to get the blankets from our driver-guide while on the game drive and we did just that. And what a relief it was! 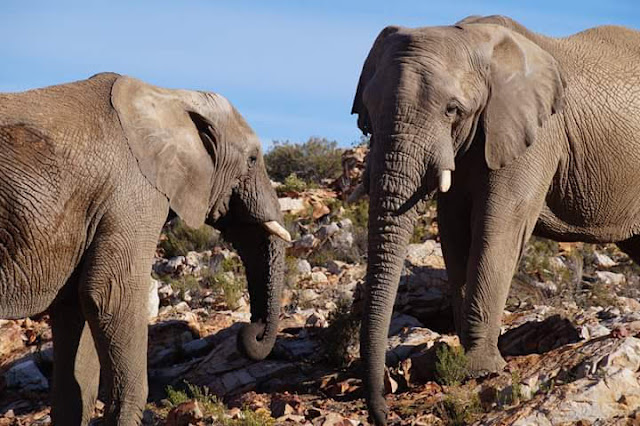 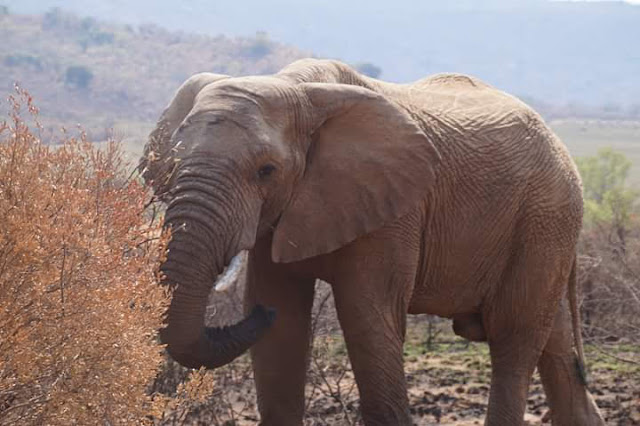 We got a close look at the wrinkled skin and trunk. 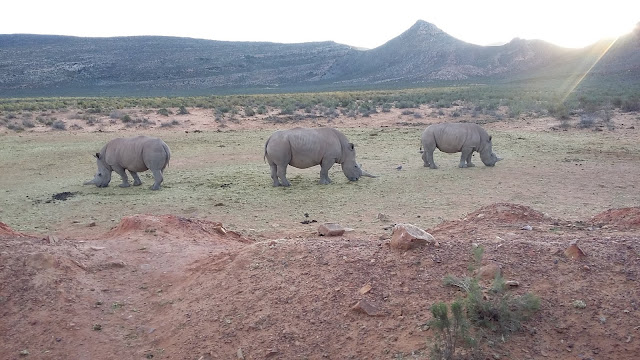 it was interesting to see the zebras mingling with the rhinos near the pond.... 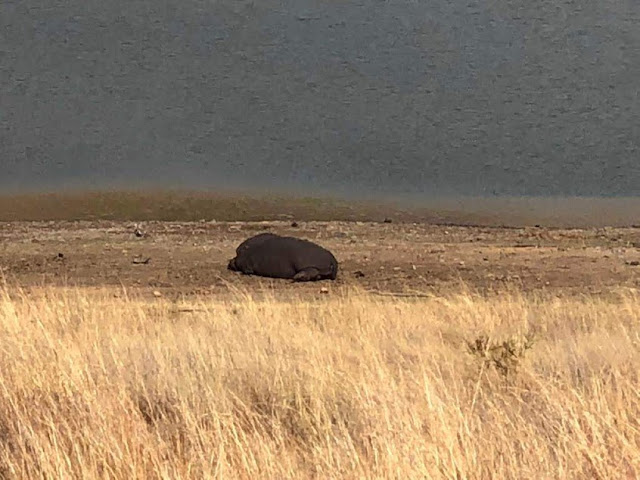 and a lazy lump of a hippo, all by himself!

After stopping at every 'animal point', our guide would give us tidbits about the animal and give us enough time to watch them as well as capture them in our cameras before proceeding to the next spot. 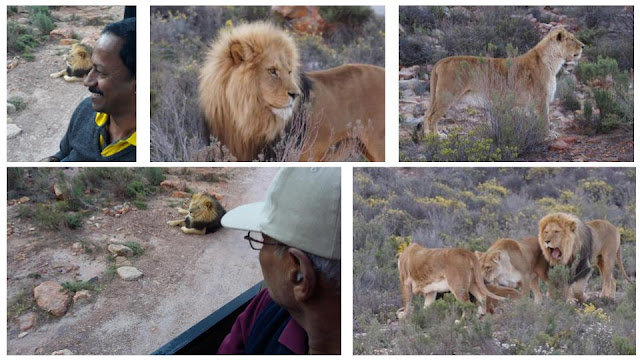 Then came the highlight - a pack of lions - obviously a family, was loitering very close to the road. 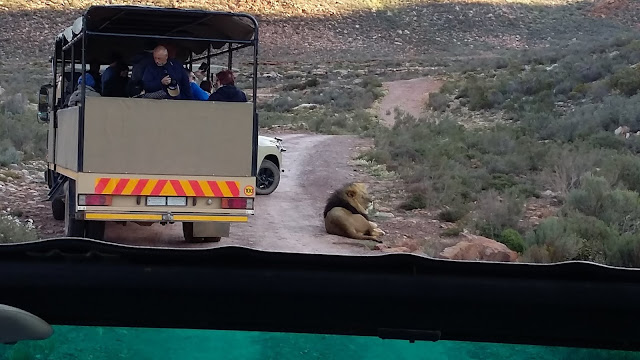 We parked behind another vehicle and eagerly watched the lion family moving about. 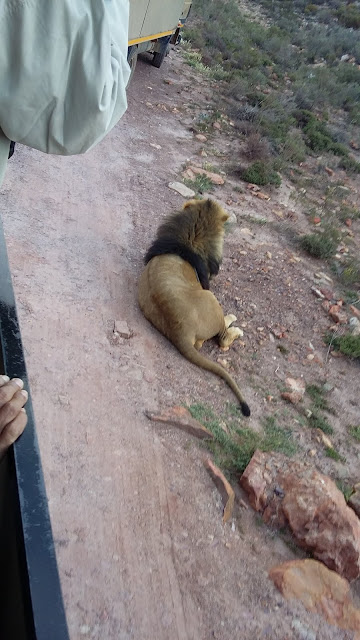 The papa lion wanted to show off / oblige us, so he walked down and decided to seat himself by the roadside, very close to our vehicle. Oh, needless to say we had the time of our lives.

The risk factor never crossed our minds then. But looking back, it could have been a dangerous situation (in spite of the fact that there were electric fences ...). It was much later that I found out from Google that Aquila is one of the mildest and safest game safaris. 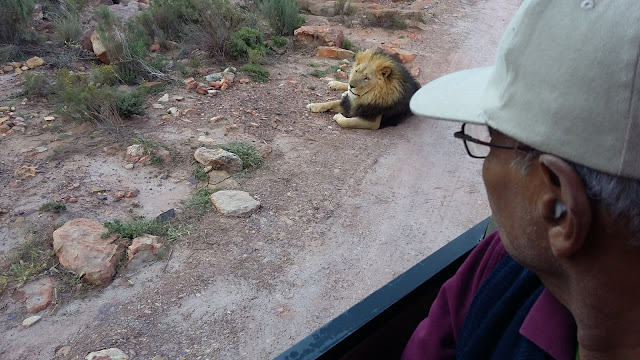 I have seen typical photos of 'lion-lying-on-roadside-beside-vehicles' on social media and considered it to be photo-shopped! Ironically I shared a similar photo! 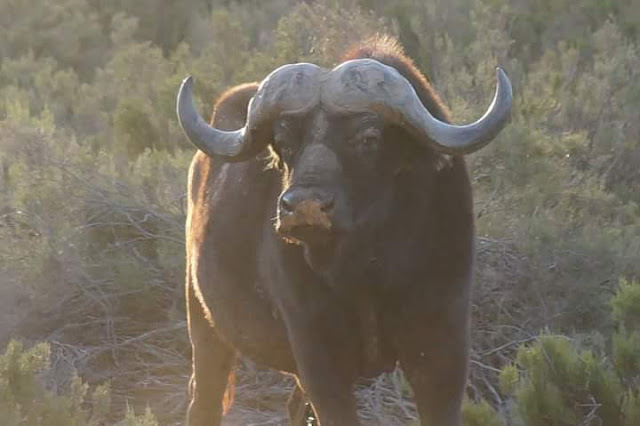 Suddenly our guide stopped the vehicle and pointed to a little distance - there were a couple of African buffaloes! Wow! We were lucky to get to see them here, after we had missed them at Pilanesberg National Park! 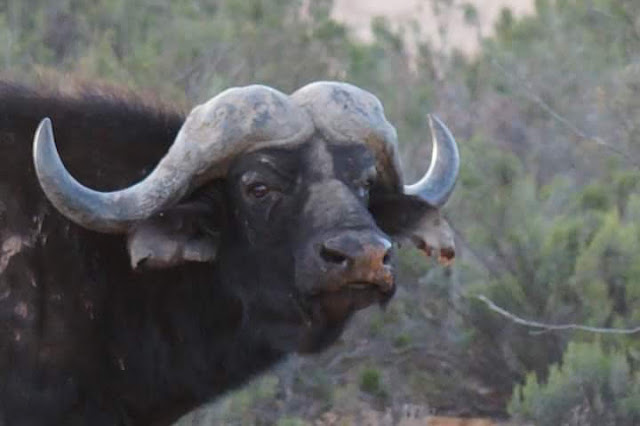 We got good close-ups of the two wild buffaloes, known to be the most dangerous of the BIG 5.

Before we realized it, one of them started running - as if to show us his incredible speed! 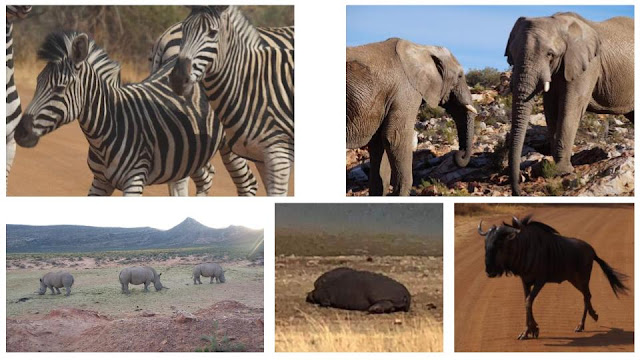 Despite the chill, we had the time of our lives spotting the animals.

But, yes, we were glad to get out of our bus and scurry to our rooms and enjoy the warmth of the heater there.

After an hour, we came out to walk to the dining hall for dinner - it was quiet and dark all around.

After a quick continental dinner, we retired to bed at 8.

Next morning, after making ourselves nice hot coffee, we had a nice hot shower and a hearty breakfast at the dining hall, 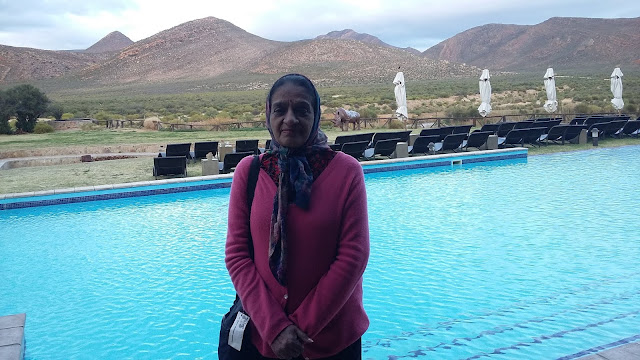 posed in front of the swimming pool.... Then we were ready to say goodbye to Aquila, thankful for the unique experience, as we boarded our coach to proceed to Cape Town with a stopover at Stellenbosch.
Posted by brinda.balasubramonian-brins.blogspot.com at 8:32 AM