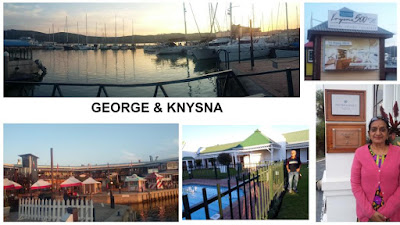 After two nights in Sun City, we drove back to Johannesburg to catch our flight to George. All of us in the group had had our packed lunch and were waiting for our boarding passes. It was then that one of the members of our group who had been running fever the previous day, fainted. (Most of us in the group were senior citizens.) Paramedics arrived to examine the gentleman and as per their advice, it was decided that he, along with his wife and brother-in-law, stay back in Johannesburg for observation and then fly back to India at the earliest. That was really sad and all of us felt very sorry about it. But the tour had to go on. We observed our tour Manager in constant touch with the trio on phone / What's App, giving suggestions. It was when they reached India on our fourth day that all of us heaved a collective sigh of relief. We have to be prepared for such unforeseen eventualities when we are travelling so far away from home! 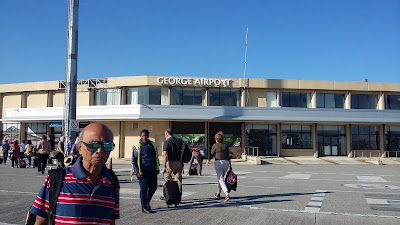 After a two hour flight, we landed at 4 pm at George, a neat, modest airport with very little crowd. We were to spend two nights in George. We were to drive to Knysna on the first day and to Oudtshoorn on the second and return to George for the night halts.

Our local guide Melody met us - a charming, chatty, humorous lady full of beans, though she looked 80. Most of us had prided ourselves about being fit in our mid / late 60's but our pride went for a toss seeing Madam Melody. Well, as it turned out, she had crossed 70. During our drives, Melody 'mausi' (aunty) would enlighten us with the history of the place / anecdotes.

The day we landed there was Heritage Day / Barbecue Day - a long weekend. But the roads were not crowded. Good roads, built during the British regime, had been well maintained. The houses were good. Doors were made of teak wood, 'stolen from your country', as Melody chose to put it. The registration plates of vehicles in George had CAW - which the locals would interpret as 'Cold And Wet' - that summed up the weather there. But we were lucky to be there on sunny mornings. The rest of the day, we would be away visiting other tourist spots. 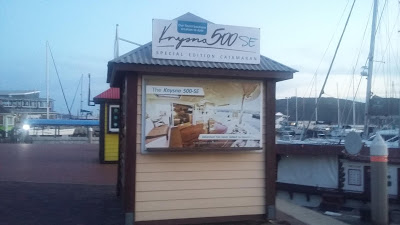 We drove to Knysna - a very picturesque drive via Pearl of Garden Route. It is a popular destination for tourists and senior citizens due to its year round warm climate. The place also boasts of several good golf courses and it is also home to Mitchell's brewery. There had been a BIG fire some 18 months ago for a week in Knysna. 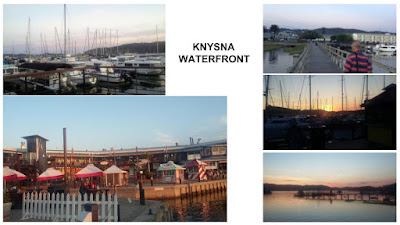 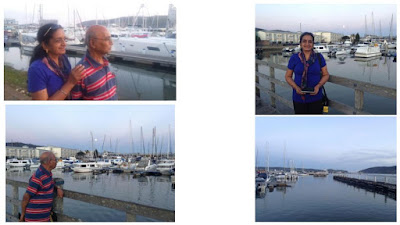 We spent an hour at the Waterfront, enjoying the calm and peace, drinking in the scenic splendor. The boats had completed their day and were quietly resting. 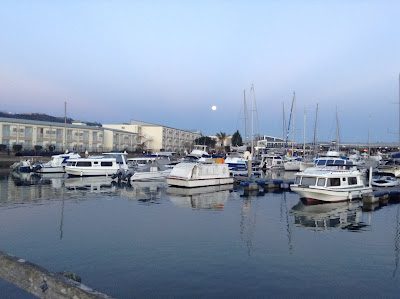 The setting sun painted the horizon in orange and pink and the full moon just couldn't wait for the sunset as it appeared in all its glory against the pink sky. 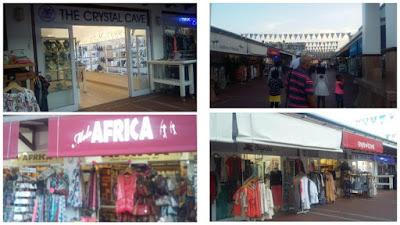 Little eateries and shops dotted the place. We were granted a few minutes of shopping. I quickly picked up a few small curio items and went for billing. It was then that I was told they wouldn't accept $. Thereafter, at every shopping session, I would first inquire whether $ would be accepted and I would get a surprised look and reassurance, "Yes, madam". 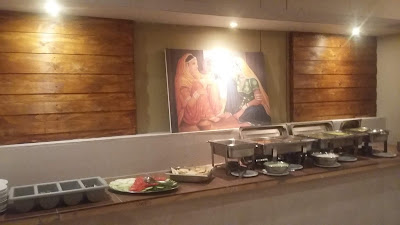 We drove back to George, had our dinner at the Indian restaurant 'Rasoiee' and then checked in at 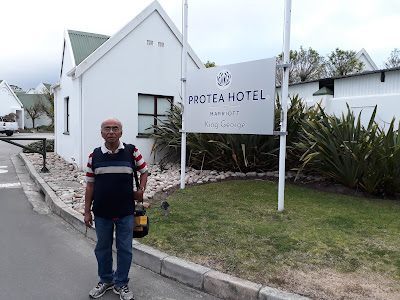 This hotel was different - white villas all over, with green roof tops. 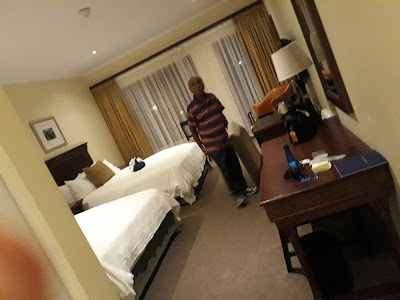 These were neat, sprawling rooms with all amenities. 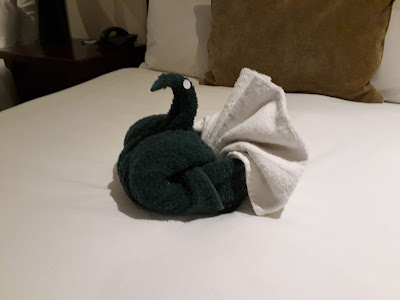 A beautiful peacock created from towels, sat on our bed to welcome us. We could see the swimming pool from our room. 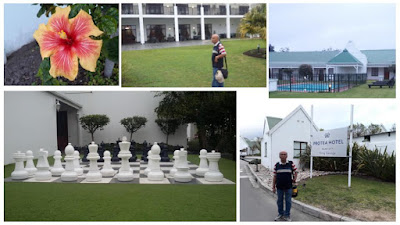 The next morning, we made a round of the hotel before going for breakfast. 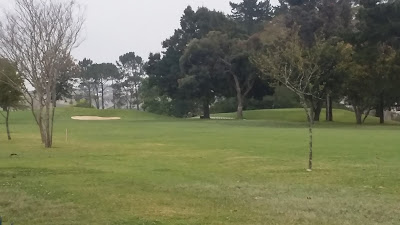 The hotel had its own beautiful golf course. 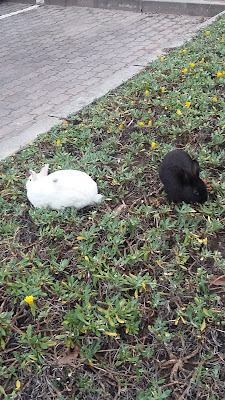 A couple of bunnies - one black and the other white, frisked all over the place. 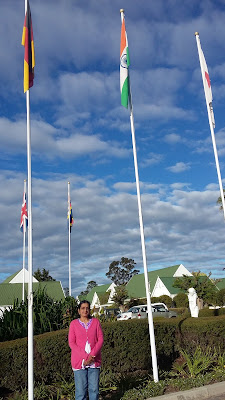 We were glad to see our Indian flag up there in front of the hotel - as there were Indian guests. 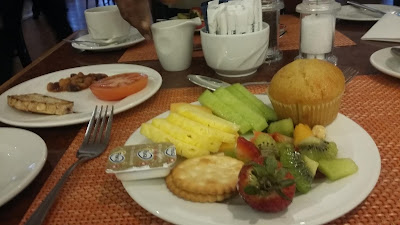 Breakfast was as usual, a good continental fare. The highlight was the coffee - specially prepared by the staff for each guest and served at the breakfast table.

We then started on our drive to Oudtshoorn.

Posted by brinda.balasubramonian-brins.blogspot.com at 10:46 PM