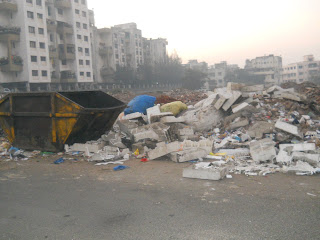 Read the piece 'Talk of the Walk' - 1? Now cut to a scene six months later – this time it’s a different place! No prizes for guessing the place!!

We get out of our housing society gate at the crack of dawn for our usual walk. “Which direction?” asks hubby. “Hm.. let me think … If we go right, we have the overflowing garbage bin raising a stink. If we go left we have to put up with the dug-up road.” It is like Scylla and Charybdis – 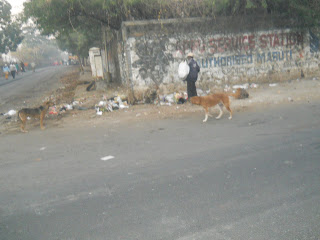 we choose the former! Obviously it turns out to be the wrong choice. We have to hold our breath (pun intended) for a long stretch strewn with plastic bags and rotting peels and eggshells and what not - the huge garbage bin has done the vanishing act - again! The quadrupeds are having a field day as they excitedly vie with humans to extricate some redeemable stuff from the rotting pile! As it is we have to walk with eyes down to avoid stepping on spit and poop of dogs/ cows/ goats ….; at 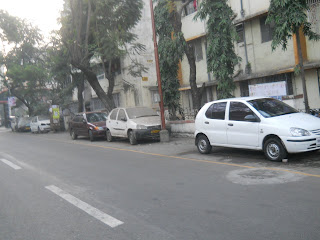 the same time, we should not swerve to the left or right otherwise the vehicle following us almost kissing our heels will knock us down. We need to look straight ahead too to be vigilant about the oncoming traffic. To make matters worse, there is a lot of traffic in this route due to the road repair in the other direction and we have to hop, skip and jump to avoid being run over by cars and scooters and cycles, not to forget the menacingly growling monstrous trucks! Some rash drivers honk so loudly in our ears or brush past us so dangerously close that they make us jump out of our skins. And those self-proclaimed lords of the roads zoom past us poor pedestrians with a proud smile of superiority playing on their lips and their puffed nose up in the air!

Some early morning walkers come armed with a walking stick (though they are not that old) or with a ‘lathi’ (though they are not from the police force or armed forces) or with an umbrella (though there is no sign of rain or sun). The reason? To keep stray dogs at bay! Usually there are at least half a dozen of them – at times calmly moving together, at other times chasing one another sometimes playfully and sometimes menacingly. Either way, we have to play safe you see! Some people even come armed with stones in self defence but there are a few others who come with bread and biscuits to feed them! The number of dog-walkers is also increasing – most of them have their dog on leash. Some others do not – and if the animal comes barging at us, they’ll grin unapologetically and assure us that ‘he’ doesn’t bite. But what’s the guarantee?

For a good brisk walk, it is best to get to the jogging track to escape the traffic and pollution. Many others think so too and make it a habit. So half the people there we know by face and at times acknowledge with a smile. The remaining are friends or acquaintances – with the former, we spend some minutes catching up with news about families and friends or indulging in harmless gossip; with the latter, we exchange pleasantries. So our walks are in a sense a part of our social life!

On the ground adjacent to the jogging track, we can watch local cricket matches – yes matches – sometimes two or even three going on simultaneously – nicely adjusted so that there is least intermingling of players and balls! And there are spectators to cheer them up! We too spend some exciting moments watching the game – it is at times more thrilling and lively than the matches on TV. But we move on soon – we have to – with our hand covering our nose and mouth - the dust hanging in the air is suffocating. There is also the danger of getting slammed by the ball!

The primary purpose of our walk is maintaining good health – of course we feel we are benefited – marginally at least – if we schedule the walk well - at minimum pollution level! There is a secondary purpose too – buying essentials (newspaper / milk / bread in the morning or vegetables / fruits in the evening) from the numerous shops lining the roads or from the vendors dotting the street corners! There may not be expansive greenery or an array of attractive gardens to catch our eye but there is enough variety of stuff stacked in the little shops around craving for our glances! And for our purses too – this means we can’t dream of stepping out for a walk without our purse!

As we enter home we thank our stars that our walk has been accomplished for the day – with our body parts intact!

Posted by brinda.balasubramonian-brins.blogspot.com at 9:54 PM