After a sumptuous breakfast at our resort, all of us were ready for a busy day. We left by bus at 9 for Aberdeen Jetty and boarded the ferry for Ross Island at 9.45. 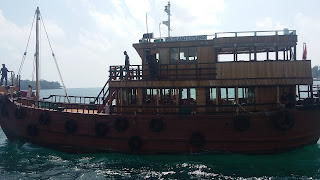 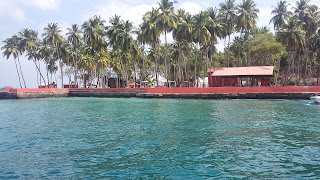 There were gasps as we neared the picturesque island.

Ross Island was the Administrative Headquarters for the islands, before an earthquake rocked it in 1941. The headquarters were then shifted to Port Blair.  During the Second World War, the Andaman and Nicobar Islands were captured by the Japanese in 1942. The Japanese rule lasted till 1945. 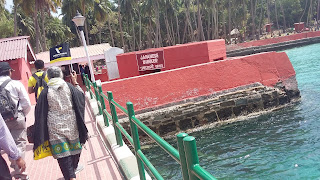 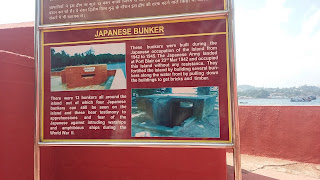 The Japanese bunkers that greet you as soon as you alight there are testimony to Japanese rule. 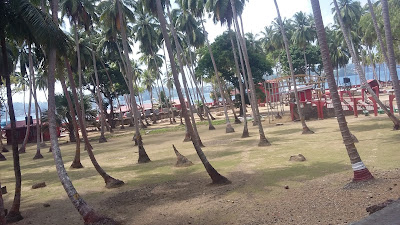 The island is maintained neatly. 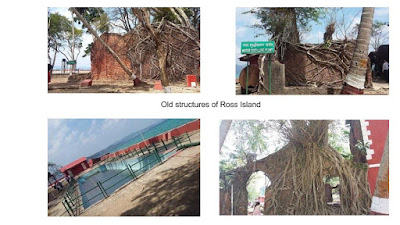 The dilapidated structures are interestingly held together by the intertwining branches of trees. The still-intact structures stand out in a fresh coat of paint. It had everything - printing press, stores, water distillation plant, church, tennis court, secretariat, hospital, cemetery and what have you. 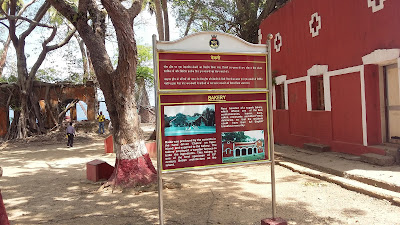 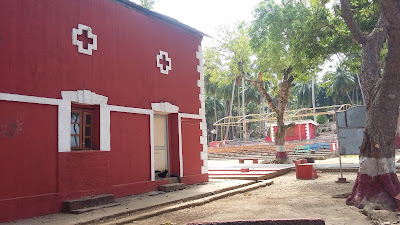 There was also a bakery with a stadium-like seating arrangement for the Englishmen and their families to enjoy their breakfast from the bakery. Today, everything has disappeared except some buildings, which housed some of these landmarks. 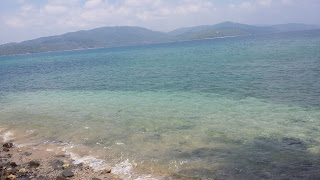 If the peach-colored sand was attractive, the different shades of the waters looked like an artist's palette. 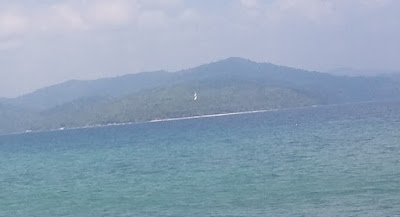 We could see another island at a distance where there was a Lighthouse - that is the one at the back of our 20-rupee note.

After we had gone around the place, we were told that we would be joined by Ms.Anuradha Rao - the famous animal-lover-guide - with a small structure but booming voice. 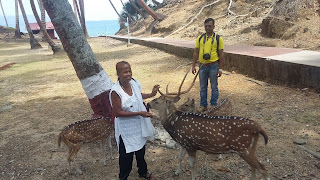 As she joined us to tell about her upbringing on this island and her interaction with the animals there, her eyes were vigilantly watching the numerous tourists. 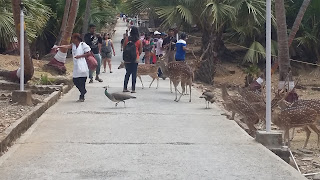 She took breaks to warn the tourists getting physical with the deer / peacocks. 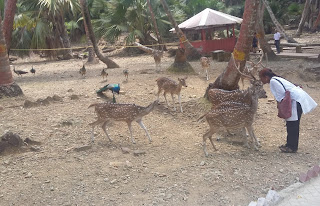 We were surprised to see the animals pricking up their ears and making a beeline towards her and she making conversations with each of them. 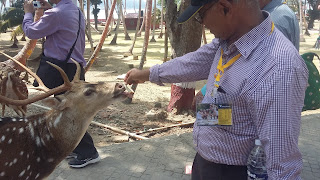 She gave us bread slices to be fed to the animals. We felt exclusive as tourists from other groups stared at us with envy as we had Ms. Anuradha and the animals beside us. 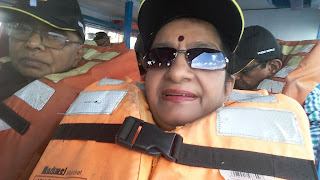 Before we knew it, two hours had slid by and it was time for us to take the ferry back to Port Blair. As I settled down in the ferry, I couldn't but remember my visits to Ross Island with my parents and siblings 50 years ago - there was nothing there - the dilapidated structures were not maintained and the place was unkempt and thickly wooded. An odd pair of hens were all that we got to see then! And now tourism had sprung up in a big way and I was mighty pleased.

We were back at Aberdeen Jetty. During our bus ride, I once again noticed the stadium, the APWD office looking great in a fresh coat of paint (I wondered whether this used to be my father's office), statues of MGR as well as Kamaraj - indicating the predominance of Tamilians in the area..... 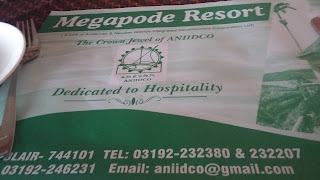 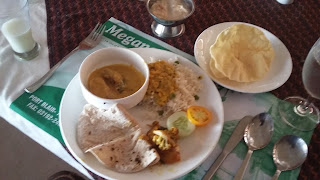 We had lunch at Bay View restaurant of Hotel Megapode - a Govt. run hotel. 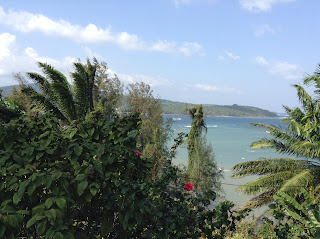 It had scenic views - the sea was visible at a distance. Of course the food was delicious, particularly their buttermilk.

I managed to grab a few minutes with our tour manager and reiterated my wish to visit Haddo Villa - our 'home of yore' and he promised to help. 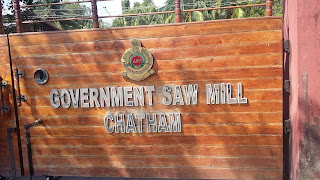 We had to hop into our bus as we had to enter Chatham Saw Mill before it closed at 2 pm. 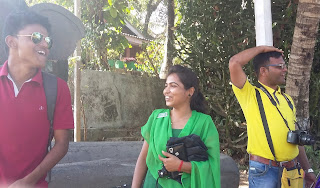 We were joined by our guide Ms. Kalyani Mandal who gave us interesting details about the Mill at the museum which housed .... 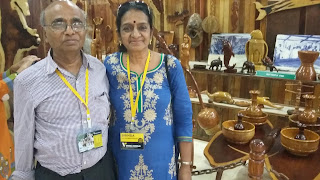 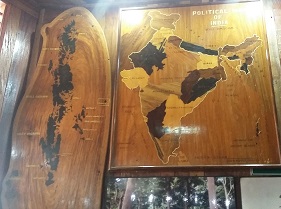 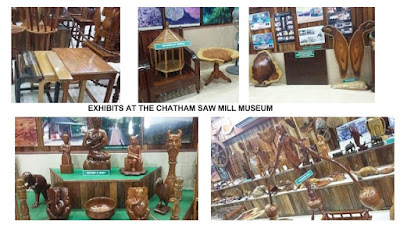 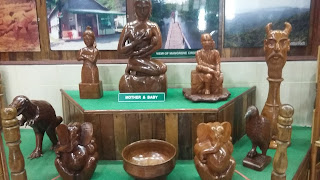 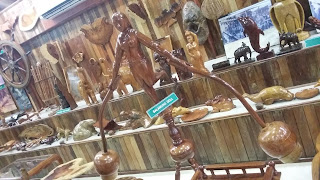 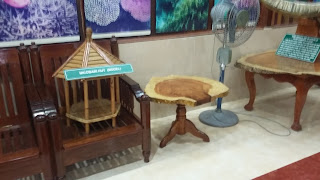 ... beautiful wooden curios as well as exotic furniture pieces made with Andaman Padauk wood as well as Burr (diseased tree trunk) tables. I couldn't help remembering all such exquisite pieces we had at my parents' place - all made in Port Blair. 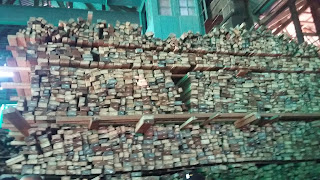 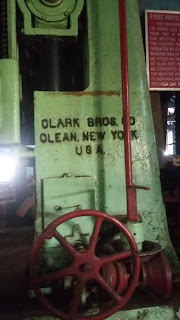 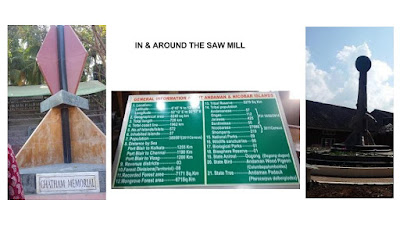 We thoroughly enjoyed going around the world's largest saw mill, getting inputs from our guide. She had made a statement that elephants were used to transport the cut wood from the forests to trucks. Some of our group-mates who hadn't listened properly wanted to see the elephants there. I told them elephants were in the forests, not here. They were not convinced till they heard from the guide herself. In fact I had seen elephants pulling huge logs when we had visited the forest area with my father. Again I remembered my visit to this mill in my teens when my siblings and I showed the least interest. 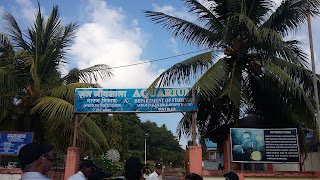 Our next halt was the Fisheries Museum where we got to see interesting exhibits of varieties of corals and fish.

The Anthropological Museum provided glimpses of the various tribes of Andamans, Jarawahs and Ongis and their evolution. Both of us did a quick whirl-wind 10-minute tour of the museum as our tour manager had arranged for us to make a private visit to 'Haddo Villa', our 'home of yore' with Irshad, the local assistant and later join them at the shopping centre 'Sagarika'. The nostalgic experience there is described in my post on 'Haddo Villa'.

We joined the rest of the group at the shopping spree at Sagarika - a renowned shop for artifacts. I too picked up a few memorabilia - made of shells / bamboo.

We returned to our resort at 7. We had been asked to pack a small bag with two sets of clothes and cosmetics for our 2-day stay at Havelock Island. After dinner at 8, we retired for the night.

Posted by brinda.balasubramonian-brins.blogspot.com at 11:52 PM