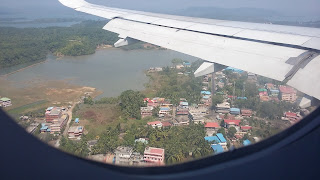 We were ready for our next tour - this time a domestic one. Both of us chose the Andamans. I was particularly excited - I was going to the place after almost 50 years. Yes, I had spent my summer vacations there as a teenager for four years - from 1964-68. You see my father was posted there as the Principal Engineer; my siblings, studied there; only I, the eldest, had to be sent to my grand parents in Kerala for schooling as there was no High School in Port Blair those days. What would it be like if I get to visit the Govt. Quarters allotted to my father after 50 years? Sheer ecstasy - just as I had felt last year on visiting my maternal Grandpa's Govt. Quarters where I was born - described in my earlier blog post 'The Museum House'. Would I be lucky this time?

As we booked our tour with Veena World, I was bubbling with double excitement - one I was wonder-struck at the numerous activities we would be undertaking which were pointers to the promotion of tourism there. Secondly or more importantly, a chance to relive some nostalgic memories by visiting 'our home' of yore! So I spent some time researching about the 'house' on Google. All I remember was it was called 'Haddo Villa' - located on Haddo Road. The landmark I could remember was an old hall in front of our house 'Deshabandhu Hall'. That didn't help with my Google search. Then I remembered that the then-insignificant Panipat Road running behind our house had attained prominence with the Navy & ONGC activities coming up in the 80's. And hey presto! I remembered that our house was at the intersection of the above mentioned roads. But the map showed one Driftwood Hotel at that point. I had no clue whether the house had become the hotel or whether it even existed.

My brother tried to offer help. He suggested I write to our 'smart-young-driver-of-those-days' and his 'then-buddy-driving instructor (on the sly)' and he'd definitely come and meet us up. When I retorted saying we wouldn't know his address, he suggested we write a letter and send it to 'Ratan Lal, (Retd) Driver, APWD, Port Blair'. He was just kidding! Once a driver, forever a driver? He must surely have climbed several rungs of the ladder!

Then I went to the official website of APWD and tried to check out who was the present Principal Engineer. From the list I understood my father was the third PE. I dispatched an email to the current CE, introducing myself as the daughter of retired CE Mr. N.D.Rajan ..... and expressed my desire to get some help in visiting Haddo Villa on one of the days we'd be spending in Port Blair during our tour. One week whizzed past, no reply. I gave up on that assistance and studied Google maps to familiarize myself with the topography of the city. In the worst case scenario, we decided to take an autorikshaw to the place on our own - after all it is not a foreign land, just our own India! And a small city at that!

Ours was Seniors' Special Tour to Andamans. At the outset, our tour manager Kaustubh Junnarkar had told us that we should express whatever desires we wanted to accomplish during this tour and he'd strive to realize them. I told him my very unique wish - of visiting 'our home' in Port Blair 50 years ago. He gave me an assurance to help. On the second day of our tour, I managed to grab a few minutes with him and reiterated my wish to stop at Haddo Villa - perhaps on our way back from Chatham Saw Mill as it was close to it. But he said that our bus would be taking a different route and promised he'd try to grab some time in between and send us there the same evening.

All excited, both of us did a quick whirl-wind 10-minute tour of the Anthropological Museum as he told us that he had arranged for us to make a private visit to 'Haddo Villa' with Irshad , the local assistant.

In search of Haddo Villa

I was bursting with great anticipation as vivid memories of our sprawling Government Quarters flashed in front of my eyes. We stayed on the first floor; the high point of that place was the enclosed sit-out with large windows from where we could see Ross Island at a distance. The ground floor was chiefly the play area of us kids and partly storehouse of vegetables and fruits harvested from our garden. We had our table for table tennis, an indoor swing .... Just outside was a small mango tree - it would give us a dozen mangoes every year - nice big non-sour delicious raw Salem (Totapuri) mangoes. We'd pluck one, sit on our front lawn, with knife, plate, salt n red chilli powder mix and relish the mango, childishly hoping some passerby would drool at the spectacle. Not to  forget the giant mango and guava trees in the sprawling acres to the right. And banana trees to the left. And the servant quarters at the back and the cow-shed just behind our house. I remember our cow delivering a calf and all of us kids (specially my naughty bro) wanting to watch from our bedroom window overlooking the cowshed; our mom promptly shooed us away and bolted the windows. Among the numerous servants we had, there was one to graze the cows!

While these thoughts were racing through my mind, our auto had reached Haddo area. I had told the driver to tell me when we reached the intersection of Haddo Road and Panipat Road. I told him to slow down as my eyes looked for our house on the left. I noticed that a lot of small shops and buildings had come up in the vicinity. I couldn't locate the house and I asked him to stop. He asked me the address. I told him we used to live in the house Haddo Villa 50 years ago. He gave me a 'kidding me?' look which meant a lot more - including the fact that he wasn't even born then. He just said, "50 years! We don't know whether the house is still there." But I was sure it was there. After coming this far .... it would be a shame to give up so soon. I told the driver to make a U turn and drive slowly back to the intersection again and stop. I got down and looked across the road.

Hey Presto! There 'she' stood like a new bride in a fresh coat of paint. Why Had I missed the house earlier? 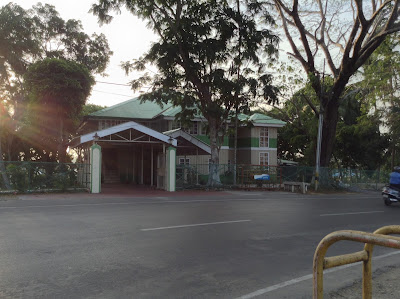 It had an additional structure - an 'inverted V-shaped' asbestos canopy at the entrance to the house. I was almost jumping with joy. All the three men with me were happy for me as we crossed the road and went to the house. 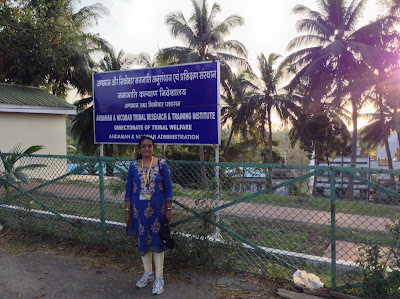 We noticed that it was now 'Andaman & Nicobar Tribal Research & Training Institute (ANTRI). 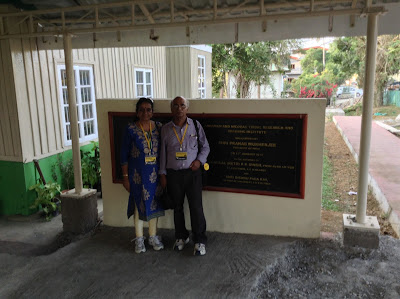 I was proud to read the tablet which stated that it was inaugurated by President Pranab Mukherji in 2014.

Click on the link to read about the renovation of the 'heritage building' to house the Tribal Research Institute. 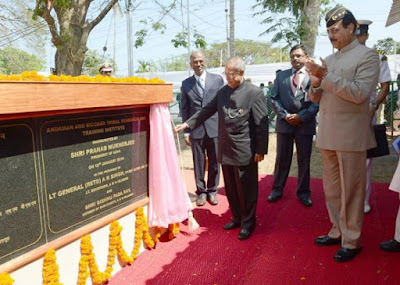 I have put up the above pic which I downloaded from the net. My maternal grand father's Government Quarters in Cochin is now Maritime Heritage Museum. And here was my father's Govt. Quarters in Port Blair, now a Research Institute (ANTRI). Coincidence? I definitely can't help feeling proud of my ancestors!

As we entered, the security guard wanted to know the purpose of our visit. I told him our family used to live in this house 50 years ago and we wanted to see this place. With a look of surprise, he ushered us in to the Director's room on the first floor and asked us to be seated. We then introduced ourselves to the Director who was amused and intrigued and excited to hear about my association with the house. He willingly came forward to take us around the place and even posed questions about each of the rooms. 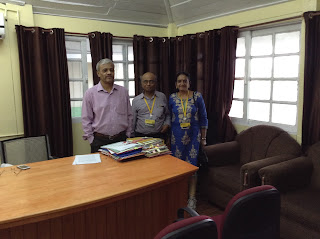 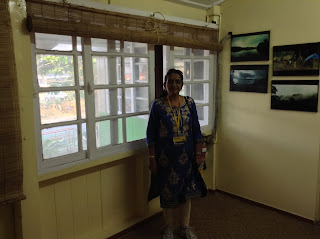 I told him that from the window of his room which used to be our favorite enclosed sit-out, we could see Ross Island at a distance. 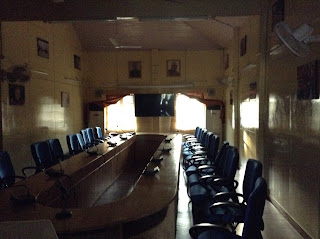 He showed us the giant Conference room and I explained to him that this comprised our dining room and one bedroom - the wall had been demolished. 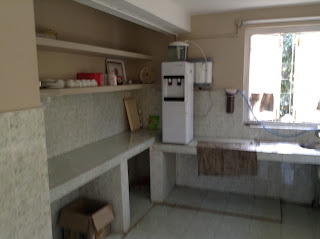 Our old kitchen had been modernized. 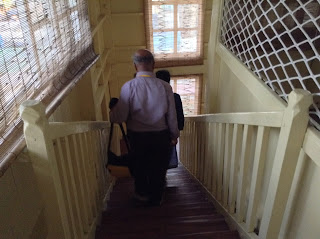 Then he took us downstairs. 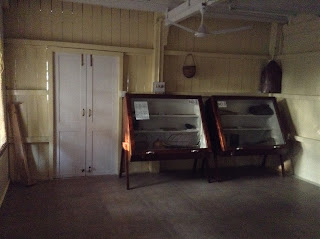 The ground floor now encompassed various departments of the Institute. 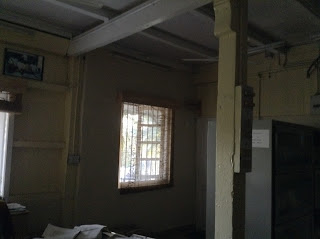 The place we had our indoor swing was now the Library section. And I did feel the guilt pangs as I told him we didn't use the ground floor much - except as kids' play area and store house!

Then we went to our sprawling garden. 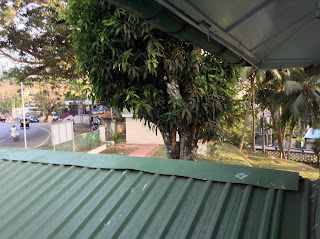 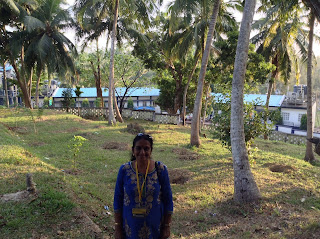 But the other mango trees were gone and in their place stood tall coconut trees. The place was maintained very well. 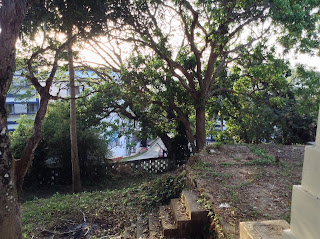 I told him about the servants' quarters behind and he showed us that it was gone too. 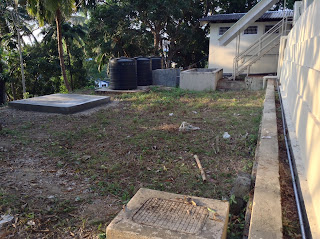 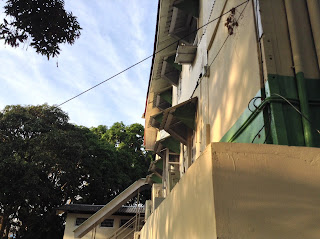 I also told him about the cow shed we used to have in the now-neatly maintained backyard and showed him our bedroom windows that overlooked the shed. 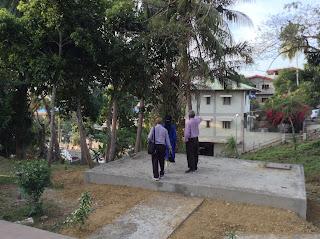 Then we surveyed the left portion of the garden. I was happy to see the house of our then neighbor at a distance, partially camouflaged among several buildings. Those days theirs was the only other house in the vicinity! 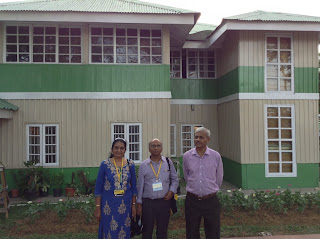 We thanked the Director profusely for allowing us to explore the house and he reciprocated the same - we were uniquely special visitors. Looking back, now that it was a Research Institute, we were plain lucky to have gone there on a working day - during working hours - to be able to meet the amiable Director and be leisurely shown around the place.

I had desired only for a brief stopover and a few pics. 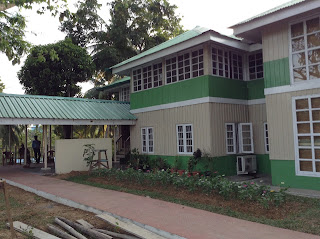 Luckily I got my fill of the place as we spent a good thirty minutes there. 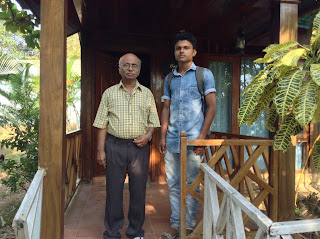 Thanks to our local friend Irshad for accompanying us and playing the role of photographer. I came back armed with loads of pics to share with my brother and sister. How I wished my parents were alive to share my experiences!

After this successful venture, I had one more on the cards - visit to (Vetrimalai) Murugan Temple built during my father's tenure. 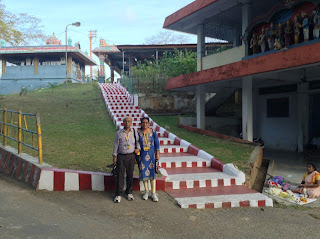 It looked nice and new just as in the web images. We went up the steps to the temple. 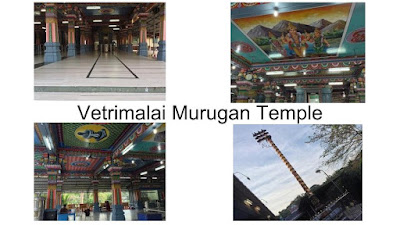 It was very colorful and beautiful. I was looking out for the tablet which originally had my father's name on it. To the curious priest, I explained that it was my father who was in charge of the construction in 1964-65. He was glad to hear that and said that the original temple had been damaged in a natural disaster and the temple had been rebuilt ...... 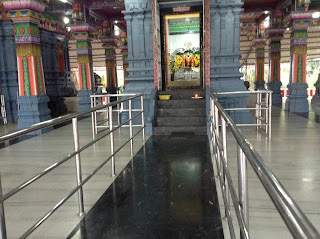 ... of course the vigrahas were the same. But I was disappointed not to see my father's name.

Surely this was the most special, gratifying and thrilling one-hour of our Andamans tour and we were glad it could materialize. 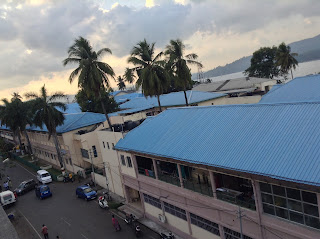 Then there was this G.B. Pant Hospital constructed during my father's tenure - I was able to see that later when we visited Cellular Jail.

This was an unforgettable, nostalgic experience unique for both of us when we had undertaken the Senior Citizens' Special Tour to Andamans with Veena World.

Posted by brinda.balasubramonian-brins.blogspot.com at 12:23 AM