London to Paris by Eurostar

All of us gathered at the lobby of Hotel Leonardo, London at 5 am - all the members of our group - right from the 9 year-olds to senior citizens in their early 70s - were punctual and deserved a big pat. We picked up packed breakfast from the hotel and loaded and boarded our bus by 5.30 and reached St. Pancras station after a long one-hour drive to catch the Eurostar. After we were handed over our tickets, we had to go through screening and immigration which should not have been surprising considering the fact that we were taking the train to another country. We enjoyed the packed breakfast of muffin, granola bar, flavoured yogurt, juice and fruit at the station. As if this was not enough, we were treated to hot coffee from the station. 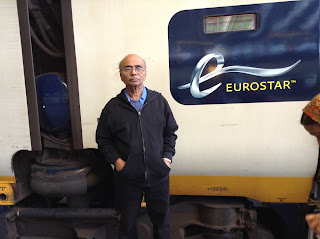 Then we boarded Eurostar in our respective compartments and took our seats. Our group of 35 were distributed in groups of fives and sixes in various bogies. The train started on time at 7.55 from St. Pancras. After a 3 1/2 hour scenic travel for the most part, including the unique underground tunnel ride under the English Channel - we reached Nord, Paris at 11.25.

During the brief wait at the station we got a taste of Paris - a youth was running and he was chased by a couple of cops and sure enough rounded up, handcuffed and taken away - he was probably a pickpocket! Sushant reiterated that we be very wary of pickpockets while in Paris and also be cautious about not getting into arguments while haggling with vendors. Useful tips - we temporarily shoved aside the Indian attitude of bargaining for something we didn't have the least idea of buying just for the heck of it! 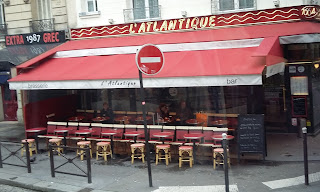 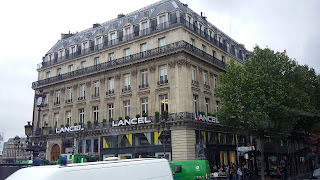 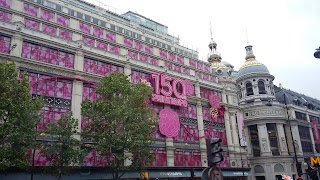 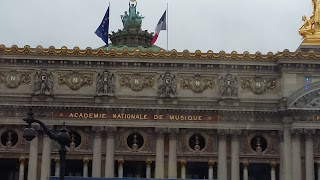 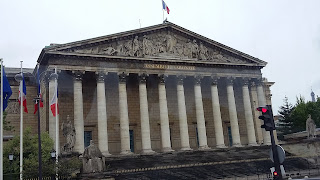 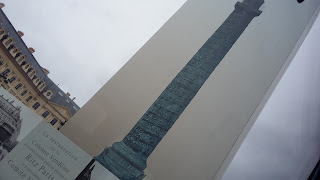 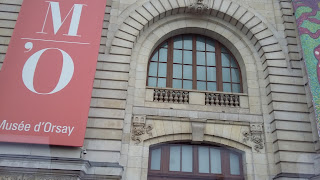 After that we drove around Paris to enjoy the sight of imposing structures - modest B & B hotel, lavish hotels, Brasseries (restaurants) and a good number of museums and monuments lined along the Seine river which we'd see again during our cruise - Vandolm Column, the sprawling Louvre Museum ( unfortunately it was not included in our agenda)the second biggest MO (Orsay Museum), Notre Dame, Arc de Triomphe, the posh shopping area Champs Elysee.... 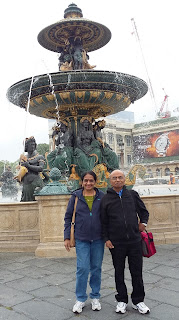 We had a photo stop at Place de la Concorde. 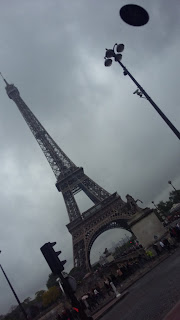 And then the bus went 'wow' as it got the first glimpse of the awesome Eiffel Tower.

Eiffel Tower Experience
We spilled out of the bus in our enthu to climb up the tower but we found a long queue. We were informed that we'd be allowed to go up to the second level, not the third. A drizzle added to our disappointment. But none of these factors dampened our spirits - we pulled out the ponchos provided thoughtfully by Kesari Travels and wore them and spent the two hours in the queue (as one of the elevators was not functioning) observing the international tourists and their repartees with the vendors selling Eiffel Tower souvenirs. 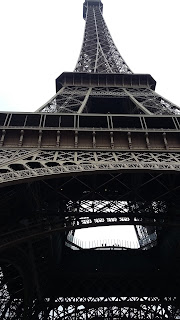 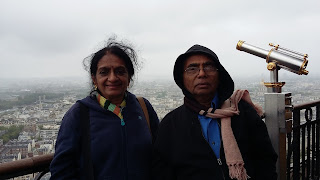 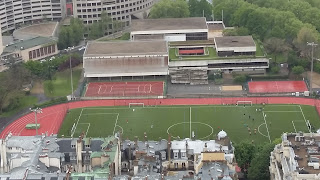 We forgot all these hurdles when we enjoyed the breath-taking panoramic view of Paris from the first level and again from the second and came out with satisfaction.

Seine River Cruise
We had to walk a few yards to take the Star Cruise on the Seine River. Again we found ourselves stuck in a queue (some mess-up) After a wait of an hour and a half, when we finally got into the ferry, we were relieved to plonk ourselves on the seats. 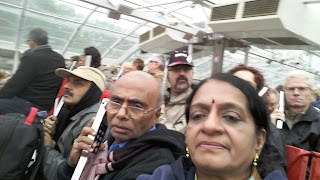 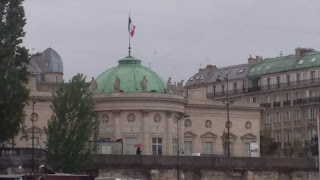 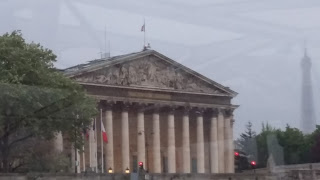 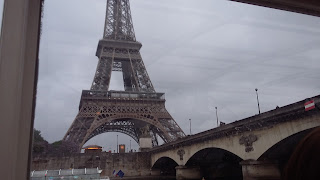 Some of us still had the enthu to click photos of the impressive monuments looming around. Others chose to relax as they listened to the running commentary on their walkie-talkies. When the twenty minute course ended, it was with reluctance that we left our seats.

We reached 'Bhojan' for dinner - since our schedule had gone haywire at the Eiffel Tower due to our grouchiness, we found ourselves waiting here too as another group was having dinner. To add to our grouchiness, we encountered a rude security guard who shooed us from here to there as  the thirty five of us tried to find a spot to stand in that congested space. Little wonder that we found the menu repetitive and the 'sheera' bad.

When we checked in at Novotel hotel at 10.30 pm, we were so fagged out after the long day that we crashed. It was next morning that I discovered our room had a fridge and a microwave. Also the restroom was unique in the sense that it had a separate WC and bathroom.

Disneyland
After a hearty breakfast at the breakfast room assigned to our group, we were all set for the day's tour.

We left at 9.15 to Disneyland which was a short drive. I was not particularly enthusiastic about Disneyland as I had seen all the theme parks in LA and Florida. Once again Paris tested our patience - there was some mess-up about the tickets, so we were left cooling our heels - in the bus itself. 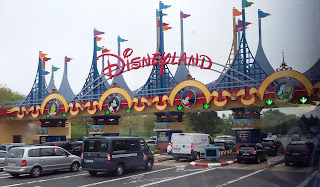 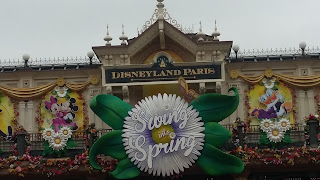 We entered Disneyland at 10.45. Sushant briefed us about the place and accompanied all of us in the first ride - 'It's a small World' - which showcased the arts and culture of the countries over the world. 'Oohs and aahs' resounded .... our group went 'arre wah' when we got glimpses of Ganpati Bappa and India. I should say I was totally bowled over by this ride - 'paisa vasool'! After this we were allowed to explore the place on our own and choose the rides of our choice - we had to assemble at the mentioned spot at 4 pm to return to the hotel. 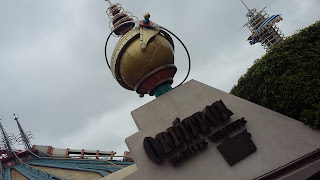 Both of us chose our rides, smartly secured Fast Pass (having had prior experience) for the required ones....... 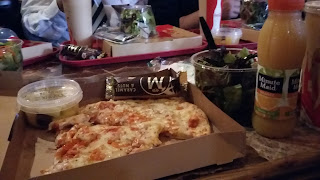 and enjoyed a good lunch of pizza, salad, juice and ice cream at the pizza place. 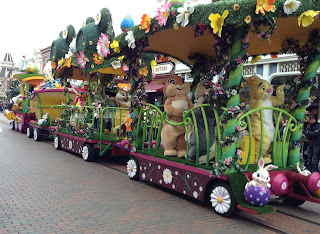 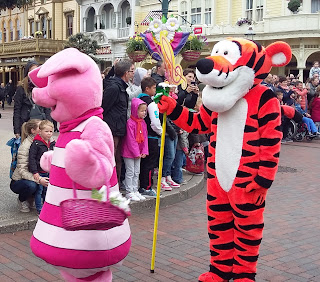 We enjoyed the colorful processions of Disney characters too. At the appointed time, all of us gathered, got into the bus and reached the hotel at 5.

We had to pack a small bag with a day's clothes and requirements as our next day's halt at the hotel in Brussels was for just a day and there would be no need to unnecessarily lug the big suitcases to the hotel room. After that we had to get ready in our Sunday best - Indian / Western for the much-anticipated Lido show. 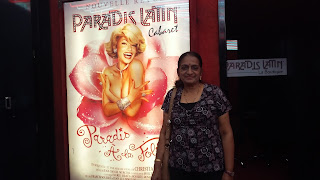 We left for Paradis Latin for formal dinner followed by Cabaret show. It was a huge hall packed with rows of narrow tables with chairs on either side, leaving just enough space for the waiters to squeeze through to serve us. Our entire group seated ourselves together - the place was teeming with international tourists arriving from various places. There were spots in the balcony too. 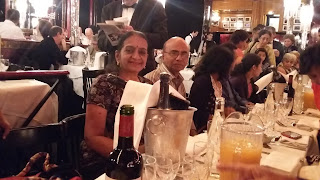 The formal dinner started at 8. We were served champagne. The three-course dinner we were served was also Indian - for starters we had paneer, salad and kabab-chutney. 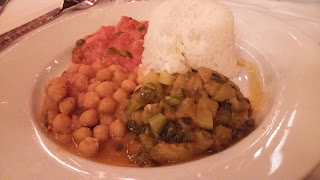 The second course was chole, mixed vegetable, rice and naan. For dessert it was ice cream and payasam (rice pudding). 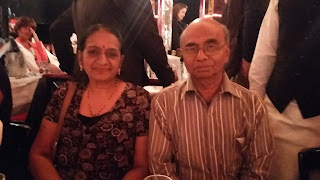 We took pictures of one another. There was the official photograph of each couple / family. 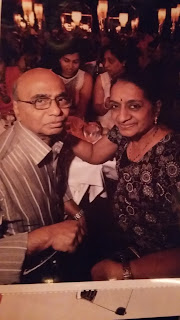 We were handed our photos with the info that we could buy each for 10 Euros. The smart Alecs that we were, we quietly and quickly took a photo of the photo and later returned the official photo with an apology.

Dinner was over at 9 and the tables were cleared as we took a restroom break. Considering the huge number number of visitors, the queue at the restrooms were not bad. We resumed our seats and the much-awaited Lido show started at 9.30. The cabarets were interspersed with trapeze and jugglery acts. What was amazing was that the cabaret items were a far cry from our Bollywood counterparts; these were performed with such grace and poise that you fail to notice the nudity. We enjoyed the show which lasted for close to two hours. 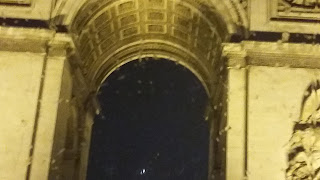 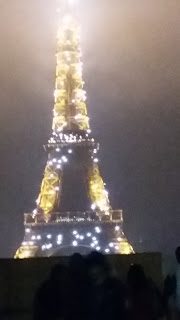 After the show, we took the bus for one more glimpse of the Eiffel Tower - we got the opportunity of watching the dazzling illumination at midnight. There were quite a few visitors and quite a few souvenir vendors too - I managed to strike a good deal as they were winding up for the the day. When we reached the hotel, it was 12.30 am. Another great day had ended.

The next day we started our drive to Brussels, Belgium.

Posted by brinda.balasubramonian-brins.blogspot.com at 10:03 PM